Please ensure Javascript is enabled for purposes of website accessibility
Log In Help Join The Motley Fool
Free Article Join Over 1 Million Premium Members And Get More In-Depth Stock Guidance and Research
By Anders Bylund – Aug 4, 2015 at 10:03AM

Sprint (NYSE: S) released results for the first quarter of fiscal year 2016 before the opening bell on Tuesday. The telecom fell short of Wall Street's revenue estimates but delivered EBITDA profits 16% above analyst estimates. Sprint shares were up 6.7% at 10:45 a.m.

Analysts were looking for earnings before interest, taxes, depreciation, and amortization of roughly $1.8 billion on $8.7 billion in first-quarter sales. Sprint delivered $2.1 billion of EBITDA earnings on just $8.0 billion in top-line sales.

The company added 675,000 net new subscribers during the quarter, up from 220,000 net losses in the year-ago period. Sprint still lost 12,000 postpaid phone customers, underscoring that it was the smallest such loss seen since 2013 thanks to five consecutive quarters of step-by-step improvements. Postpaid tablet connections and a variety of prepaid devices provided the bulk of Sprint's subscriber growth.

Tablet subscriptions increased by 10% year over year, down from 16% in the fourth quarter and 24% in the year-ago period. While tablet subscribers are helpful, Sprint has refocused its marketing to support the gold-standard postpaid phone category instead. And it's simply a smaller market opportunity at any rate. At 2.9 million accounts, tablets make up 9.7% of Sprint's postpaid connections today.

The improving but still negative postpaid phone trend puts Sprint shoulder to shoulder with AT&T atthe moment, as the two telecoms watch Verizon and T-Mobile US running away with prospective customers in this highly profitable market segment. In their recently published reports for the same calendar period, AT&T would only admit to scoring "positive" postpaid phone adds while Verizon sported 321,000 new accounts in that category and T-Mobile won this race with 760,000 additions.

The RadioShack buyout has already resulted in each of the 1,435 co-branded stores adding Sprint signage and telecom employees. The company says that about one quarter of these locations have fully operational "store-within-a-store" layouts today, and the rest should have that by the end of December.

Sprint's customers are getting into some new habits. Devices capable of connecting to Sprint's high-speed LTE network made up 77% of all current accounts by the end of the first quarter, up from just 55% a year earlier, and 51% of Sprint's postpaid sales were financed by a leasing program that didn't exist four quarters ago. Here's what the lease program is doing for Sprint's cost of products, which translates directly into that juicy EBITDA earnings surprise: 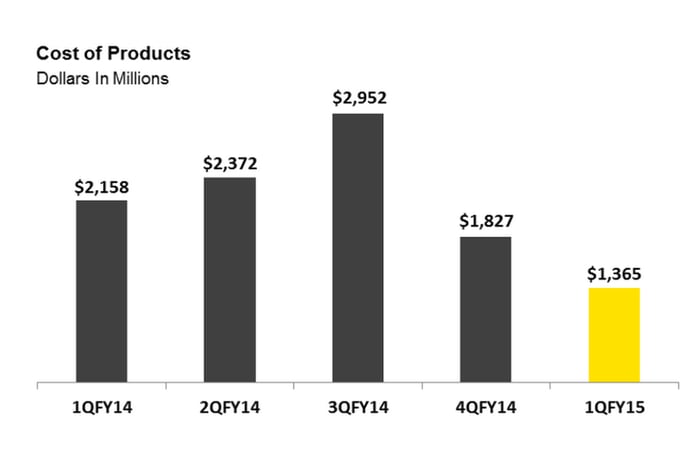 "Over the past year, Sprint has made meaningful progress in our turnaround by improving our network performance and enhancing our overall value proposition," said Sprint CEO Marcelo Claure in a prepared statement. "Going forward, we are confident in our plan to leverage our unique spectrum assets to make our network a competitive advantage, aggressively reduce operating costs, and utilize our business relationships and assets to fund our turnaround."

That's exactly what Sprint needs to do here. Verizon and AT&T already showed how superior networks can create dominant market giants, and Sprint putting its spectrum holdings to work with an expensive but effective network upgrade program. Strongly positive EBITDA profits notwithstanding, Sprint doubled its capital expenses year over year and still burned $2.2 billion of free cash in the quarter.

I like Claure's steady hand on Sprint's rudder. The turnaround is indeed gaining traction, and should continue chugging along as those network investments start paying dividends. Eventually, Sprint might even start gaining postpaid phone subscribers.

Anders Bylund has no position in any stocks mentioned. The Motley Fool recommends Verizon Communications. Try any of our Foolish newsletter services free for 30 days. We Fools may not all hold the same opinions, but we all believe that considering a diverse range of insights makes us better investors. The Motley Fool has a disclosure policy.