He made that abundantly clear during the company's third-quarter earnings call, during which he devoted much of his time to discussing the company's digital initiatives. He specifically focused on the chain's effort to bring its digital order-ahead service to all company-owned stores by the end of the year.

"By further enhancing our already world-class digital technologies through the introduction of capabilities like Mobile Order & Pay and soon to be delivery and expanding our loyalty program, we are driving traffic as reflected in the 4% growth in traffic in Q3," Schultz said in his opening remarks.

Today, you will hear about unique digital partnerships that we are forging with like minded businesses in a number of verticals that will further leverage the Starbucks brand and our digital assets in order to further reduce our already low cost of customer acquisition and drive additional incremental traffic.

Starbucks sells coffee, but technology drives that business and will be at the forefront of growth.

It's all about Mobile Order & Pay
One of the biggest challenges facing Starbucks is that many of its drinks take time to make. That can lead to long lines in stores, degrading the customer experience, and maybe causing some potential customers to simply walk past.

Mobile Order & Pay solves that problem and eliminates any backup at the cash registers. Customers can use their phones to place their order in advance, pay for it, then simply pick it up in the store.

It's an elegant system that I had the chance to test on a recent vacation (it's not rolled out near my Connecticut home yet) that makes stores more efficient, especially during peak traffic times.

"Mobile Order & Pay is enabling us to serve more customers more quickly and efficiently and to significantly reduce attrition off the line," Schultz said. "We are already seeing positive impact on operating results."

The CEO added that the service "is fueling both revenue and profit growth in every market in which it has been deployed, with customer adoption starting faster and accelerating with each new phase we roll out."

Rewards are key, too
Schultz also talked about another digital initiative, the company's My Starbucks Rewards program, which allows users to receive incentives like free food and drinks from making purchases. He said: 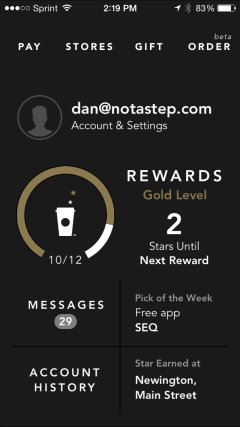 The Starbucks app is at the center of its digital strategy.

MSR continues to be one of our most important business drivers as new members contribute not only short-term increases in revenue and profit, but also to long-term loyalty for years to come. We now have 10.4 million active MSR members, up 28% from Q3 of 2014 with 6.2 million being Gold members, up 32% from Q3 last year.

The increase in Gold membership, which requires 30 purchases in a calendar year, shows that the the loyalty program is driving traffic to stores. MSR members now account for approximately 30% of total tender in North America, according to Schultz.

Mobile payment is rising, too
Starbucks' app also allows customers to pay using a smartphone either by linking a credit card or loading it with gift cards. That area of the business has been picking up as well, the CEO explained:

We have reached the milestone where mobile payments now represent 20% of all in-store transactions in our U.S. stores, more than double the figure from only two years ago, and we are now processing nearly 9 million mobile transactions each week.

Digital payment can not only speed up the line, but it may lead to customers spending more because it doesn't feel like spending money in the traditional sense.

It's all coming together
Schutlz believes all of the company's digital successes are related.

"Our plan all along has been to bring both our MSR membership and our digital capabilities to scale, and we are now there," he said. This will allow the company to:

That's the real goal -- not just improving the in-store experience, but integrating Starbucks into its customers' live when they are not in the store. The company has begun doing that by offering programs that tie MSR into a variety of non-Starbucks rewards, including free music from Spotify and taxi-life services from Lyft.

The coffee chain is well ahead of most of its competitors, but it still has a ways to go in developing its digital future. Schultz seems committed to doing whatever it takes to make that happen.