What: It was a really tough month to be invested in energy, but shares of Laredo Petroleum (NYSE:LPI) were hit particularly hard in July. Shares crashed more than 28% as a decline in oil prices and the fear that cheap oil could be around longer than most of us would like. These speculative fears have sent investors running for the exits of many independent oil and gas producers that rely 100% on the price of oil for their revenue stream.

So What: Laredo Petroleum's entire future rests on the successful extracting and selling of oil from a single acreage position in the Permian Basin. Based on the company's investor presentations and what management is saying, it has a pretty clear development plan that should help keep costs down. But even these carefully laid plans and reduced capital spending for 2015 are no match for a barrel of West Texas Intermediate crude getting less than $50 on the open market.

Laredo does have some price protection on the barrels of crude it's currently selling through some futures contracts, as seen in the following graph. 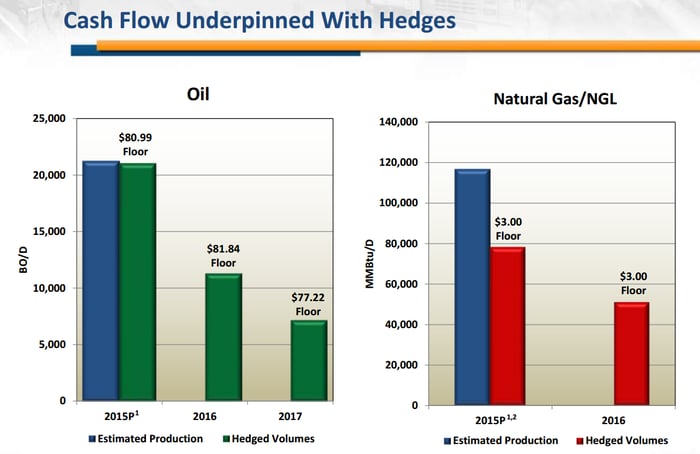 But once those hedge positions wind down through 2016, things could get really rocky for Laredo, and that is one of the biggest fears for investors right now.

Now What: Too much of Laredo's future is dependent on a recovery of crude oil prices to be considered a safe value investment today. Sure, the acreage that it has in the Permian Basin is very attractive and could likely make a company a lot of money when crude prices recover some day, but the question remains whether Laredo can keep the lights on long enough to see those better crude prices today. If this stock is on your radar, then it's probably best to sit this round out until we see some more solid signs that either 1) Laredo can prove to be profitable in this lower price environment, or 2) the fundamentals of crude oil start to swing in the favor of higher oil prices.