Last year, T-Mobile (NASDAQ:TMUS) CEO John Legere said his company would overtake Sprint (NYSE:S) in total subscribers by the end of 2014. We're now halfway through 2015, and Legere has delivered on that vow to investors. It might be a couple quarters late, but T-Mobile is now officially the No. 3 wireless carrier in the U.S.

Pulling ahead by a nose
Over the past couple years, T-Mobile had been catching up to Sprint in terms of total subscribers -- fast. Some of that growth was acquired in the form of MetroPCS, which closed in 2013, but T-Mobile has done an admirable job of integrating MetroPCS (and its spectrum).

The Un-Carrier shut down the last three remaining markets that were still running on MetroPCS's legacy CDMA network in June, just two years after sealing the deal. In the context of integrating wireless technologies, that's a quick transition. Compare that to Sprint, which took eight years to shut down its iDEN network in 2013 after acquiring Nextel in 2005.

In no uncertain terms, T-Mobile's broad-based Un-Carrier strategy has driven the company's subscriber base skyward, as it itemized customer pain points and crossed them off its list. 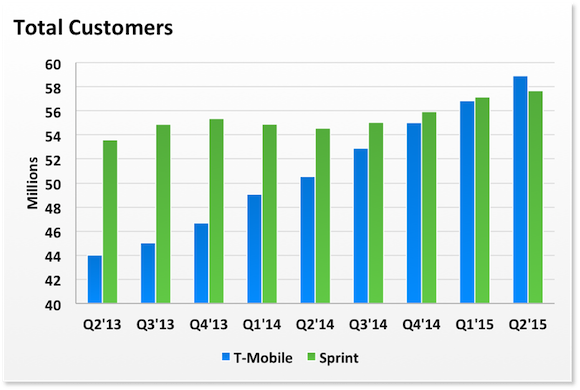 The net result is incredible subscriber growth in a once-stagnant market.

Can Sprint comeback?
The news comes after Sprint put up its second quarter figures. While the company does seem to have the foundations of a turnaround, reporting the lowest postpaid churn in its history, the net additions of 675,000 didn't have much of a chance keeping up with T-Mobile's 2.1 million net additions. Importantly, T-Mobile also has nearly as many postpaid subscribers, the users that carriers value the most.

Source: SEC filings. MRQ = most recent quarter. Figures may not sum due to rounding.

Sprint CEO Marcelo Claure even put aside the bickering with Legere and congratulated him, vowing to similarly focus more on customers as an acknowledgment that the strategy is working.

Sprint gave additional detail on its network densification plan as well, saying that it will continue to deploy its 2.5 GHz spectrum. At the same time, it is working with third-party partners to set up a leasing company that can finance devices to consumers, reducing the capital outlay required on Sprint's part. Claure is also looking to reduce fiscal year 2015 costs by $1.5 billion. Ideally, all of this means that Sprint won't have to raise external capital by tapping public debt or equity markets, or selling spectrum holdings.

The No. 4 carrier is even boosting fiscal year 2015 guidance and now expects adjusted EBITDA in the range of $7.2 billion-$7.6 billion, up from prior guidance of $6.5 billion-$6.9 billion. This fight ain't over yet.

Breaking up is hard to do
Naturally, Legere isn't stopping. He's made that quite clear. The Un-Carrier will now turn its attention to the No. 2 carrier, AT&T (NYSE:T), but T-Mobile has its work cut out for it as Ma Bell still has a healthy lead. At last count, AT&T had a total of 123.9 million connections, including wholesale and connected devices. The company grew connected devices by an impressive 27% last quarter to 23.4 million, as people start adopting connected cars in increasing numbers.

Have you ever had a really tough break-up where your ex wanted everything you have? Yeah, that's what T-Mobile hopes to do to AT&T.