Premium-luggage maker Tumi Holdings (NYSE:TUMI) announced second-quarter earnings after the bell on Wednesday, Aug. 5. Here's what you need to know.

Gross profit margin of 58.9% represented a 100-basis-point increase from a year ago.

Tumi's earnings and revenue both beat Wall Street's expectations. Analysts polled by Thomson Reuters had expected earnings of $0.19 a share on $132.96 million in revenue, on average.

A boost in margins as premium product lines shine
For years, Tumi sold its well-regarded travel luggage through wholesale channels, mostly upscale department stores. But in recent years, it has begun selling directly to consumers. It still has a substantial wholesale business, but it also now sells directly via its own website and a chain of 164 (and growing) small retail stores around the world.

Both channels looked solid in the second quarter, particularly on the international side -- with some qualifications. Direct-to-consumer sales grew just 1.4%, which doesn't compare well with the 12.9% growth Tumi posted on that side of the business a year ago. And wholesale sales were soft, particularly in North America.

The story was better than the thin-looking comparison would suggest, especially overseas. In euro-denominated terms, direct-to-consumer sales through full-price retail stores outside North America grew over 23% -- although that gain turned into a slight (0.8%) decline once those euros were translated into dollars.

Still, Tumi managed a big jump in operating profit margin, to 18.3% from 15.9% in the year-ago quarter. Favorable trends in product mix helped a great deal, as did some spending reductions.

During the company's earnings call, CEO Jerome Griffith acknowledged that wholesale sales of the company's new lower-priced line lagged during the second quarter because of slow adoption by Tumi's retail partners. But, he said, the company saw good growth in its higher-margin women's and premium lines, and that helped boost margins.

And CFO Mike Mardy said that Tumi spent less on promotional efforts than it did in the year-ago quarter, adding to the year-over-year margin improvement.

A good result, as Tumi stands by its full-year guidance
On balance, it was a good result for Tumi, as well as a welcome one after its first-quarter results fell well short of expectations. Last quarter's report took a roughly 20% bite out of the stock price. 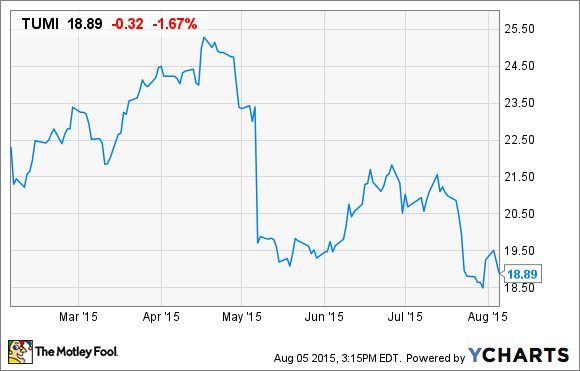 Tumi continues to build its impressive cash reserve. Its cash and equivalents stood at $72.7 million as of June 28, up from $52.8 million at the end of 2014. Mardy said the company could consider returning some of that cash to shareholders at some point, but he had nothing to announce on that front.

Tumi left its full-year guidance unchanged. It continues to expect its net sales to increase between 6% and 9% for the year, and per-share earnings to land between $0.90 and $0.95.