What: Shares of Chuy's Holdings (NASDAQ:CHUY) roared to a 22% gain on Wednesday, following the release of spicy second-quarter results with a side of bullish analyst actions.

So what: For the second quarter, analysts expected Chuy's sales to rise 16% year over year to $73.4 million. Earnings were seen simmering 19% higher at $0.25 per share.

Instead, the regional Tex-Mex restaurant chain delivered earnings of $0.32 per diluted share on $75.4 billion in sales, beating both estimates. Chuy's paid off the last $8.5 million of long-term debt during the quarter, increased earnings before interest, taxes, depreciation, and amortization by 36%, and reported same-store sales growth of 3.2%. Same-store sales have now increased year over year in each of the last 20 quarters.

Foot traffic to Chuy's locations decreased by 0.7%, compared to the year-ago period. At the same time, average spending per customer increased by 3.9%, more than offsetting the slightly lower traffic.

That bump assumes continued same-store sales growth and up to 11 new restaurant openings. To put that build-out target into perspective, Chuy's currently operates 64 restaurants in 14 states. 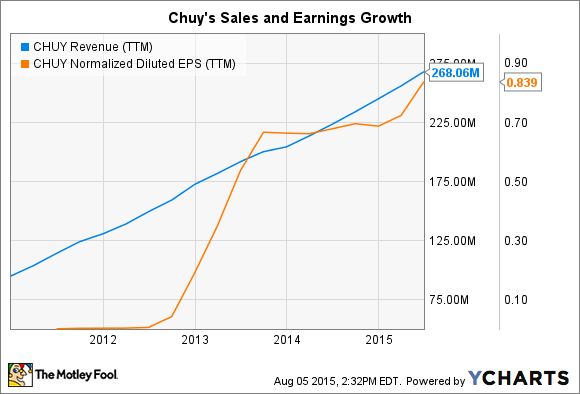 Now what: Today's popping share price got a further boost from analyst firm Wunderlich, which took one look at the second-quarter results and then upgraded Chuy's from a "hold" rating to a "buy" with a $34 price target. In previous comments, the same firm praised Chuy's for its rock-steady growth and attractive restaurant concept, noting a very long runway ahead for domestic growth opportunities.

The sudden surge in restaurant builds shows that Chuy's is capitalizing on that runway -- and it's all being done without risky loan-based financing.

Chuy's earnings had plateaued since 2013 while sales continued to rise unabated. Now the company is back on track from solid improvements on both the top and bottom lines.

This stock looks spicy for good reason -- the underlying business is getting tasty again.