After logging a very poor performance in 2014, Mexican budget airline Volaris (NYSE:VLRS) has been the best airline stock to own in 2015. While many airline stocks have declined this year in spite of their surging earnings, Volaris shares are up 58% year to date. 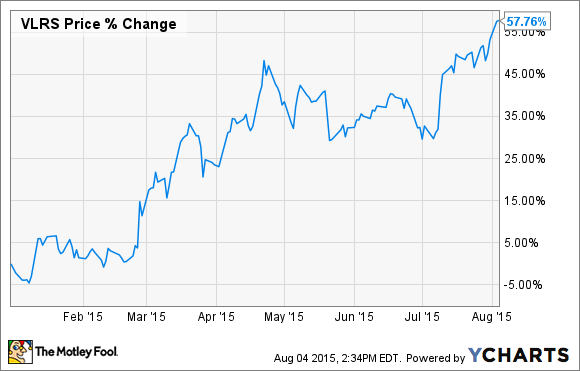 Fortunately, it's not too late to get in on this growth story. In fact, shares are still less than 20% above their $12 IPO price. As Volaris continues to grow while strengthening its profit margin over time, the stock is likely to move much higher.

Stellar margin recovery in the first half
In the first half of 2014, Volaris lost quite a bit of money. Supply growth outstripped demand in the Mexican air travel market, driving down fares and sapping the profitability of both Volaris and its rivals.

But renewed capacity discipline and falling oil prices have done wonders for Volaris' profit margin this year, in spite of the headwind caused by the falling peso. For the first half of 2015, Volaris' operating margin improved by 18.4 percentage points year over year, reaching 8.8%.

Headwinds to the recovery
Wall Street analysts seem to think that the recovery is running out of steam. For example, the average analyst estimate for Q3 EPS is $0.31.

Assuming a normal tax rate around 30% and excluding special items, this implies an operating margin of 14%-15%, up from 9% in Q3 2014. That would represent a big slowdown in Volaris' margin expansion. Meanwhile, analysts' Q4 estimates assume just 1-2 percentage points of operating margin improvement.

To be sure, Volaris does face two key headwinds. First, the year-over-year comparisons will get more difficult each quarter this year, as Volaris' unit revenue started to recover by the second half of 2014. Second, the peso has depreciated rapidly since last fall. Since most of Volaris' costs are dollar-denominated but most of its revenue comes in pesos, this peso devaluation hurts its profitability.

Volaris could beat expectations
That said, I think analysts are underestimating Volaris' ability to overcome these headwinds. The company's biggest cost by far is fuel, and oil prices have continued falling in recent weeks. Oil prices have fallen so far since last year that even with the less favorable exchange rate, Volaris is still paying much less for fuel.

Volaris is also directing most of its capacity growth to the international market -- primarily the U.S. It expects to grow international capacity 33%-36% year over year in 2015. This expansion in the U.S. means that Volaris now gets 30% of its revenue in dollars, insulating it somewhat from the peso's decline.

Volaris has been expanding rapidly in the United States. Photo: The Motley Fool

Finally, Volaris is constantly working to reduce its own costs. Last quarter, it finished a project to add five more seats to each of its A320s. It is also shrinking its fleet of A319s and replacing them with A320s and A321s, which are larger planes that offer significantly lower unit costs.

Long-term outlook is bright
Volaris' strong 2015 performance won't be any flash in the pan, either. Volaris plans to continue expanding capacity about 10%-15% annually on average for the foreseeable future, thanks to a backlog of 62 aircraft on order, as of April.

Volaris will also reduce its cost structure significantly as it grows. Today, the A319 jet makes up about one-third of its fleet. But by 2019, Volaris is scheduled to return all of its A319s to the lessors.

Meanwhile, on the revenue side, Volaris will continue growing its U.S. routes at a disproportionate rate. That should benefit profitability due to the higher household incomes of the U.S. Growing its dollar-denominated revenue will also reduce Volaris' currency exposure.

Volaris will also keep working to grow its ancillary revenue. These revenue streams tend to be more stable than ticket revenue, which can be affected by economic conditions and competitors' capacity decisions.

Volaris has had some big ups and downs since its IPO in 2013, but it's back on track and on pace to deliver stellar earnings growth in 2015. Based on its industry-leading cost structure and solid plans to increase that advantage over time, Volaris looks like it could outperform Wall Street's expectations by a country mile. I'm planning to enjoy the ride!