3D Systems' (NYSE:DDD) second-quarter earnings released this morning fell below Wall Street expectations. The 3D printing giant reported revenue growth of 13% year over year to $170.5 million, translating to a net loss of $0.12 per share, or a $0.03 net profit per share on a non-GAAP basis. Wall Street expected 3D Systems to generate $173.7 million in revenue and earn an adjusted $0.09 per share.

Although 3D Systems missed Wall Street estimates and cited ongoing macroeconomic challenges within the earnings release, the stock surged as high as 26% in early trading. Investors appear to be applauding that the release wasn't peppered with any major negative surprises.

Organic growth off 5% but potentially stabilizing 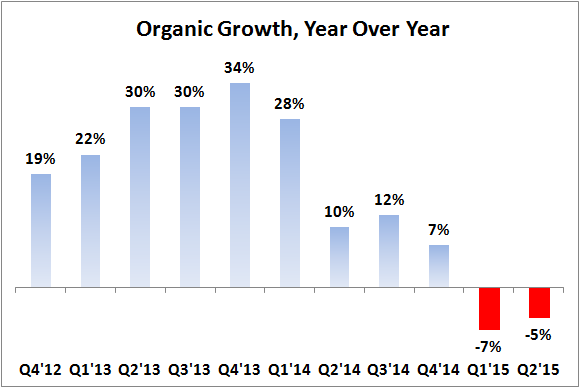 The demand picture
Demand for 3D Systems' design and manufacturing products and services fared quite well in the second quarter despite ongoing macroeconomic challenges driven by strong currency headwinds and weak performance from its Asia-Pacific segment. Overall, design and manufacturing products and services represented nearly 95% of the company's total sales, increasing by 12% annually and by 11% sequentially to $161.2 million.

By geography, the Americas and Europe, Middle East, and Africa segment returned to growth, while Asia-Pacific experienced a decline:

Another encouraging sign for demand was that 3D Systems product revenue increased by 10% year over year during the quarter, and its backlog increased by 3% sequentially to $38.8 million. The increase in backlog suggests that future demand for 3D Systems' printers may have begun to stabilize. As the above chart illustrates, 3D Systems' materials revenue fell by 4% year over year, marking the second consecutive quarter of decline. Although investors would normally want to see this figure rise as 3D Systems grows its network of 3D printers and customers use their printers more, because it suggests underlying strength in the company's razor-and-blade business model, the decline was offset by an increase of 7.3 percentage points in the segment's gross margin, driven by efficiency gains.

Expenses on the rise
Thanks to completing recent acquisitions and inheriting their expenses, 3D Systems' second-quarter operating expenses outpaced its revenue growth significantly. During the earnings call, management highlighted that it expects operating expenses should first level off before declining, ultimately allowing it to continue investing in innovation, quality, and streamlining its processes.

Focus on efficiency
Within the earnings press release, CEO Avi Reichental said, "While a period of high growth enabled us to acquire strategic assets and build critical expertise, our rapid expansion permitted certain operating inefficiencies that we are currently addressing. Specifically, we are enhancing the quality of our products and services, accelerating synergy and cost reduction measures, driving process improvements and working closely with our channel partners to improve our sales operations and worldwide coverage."

In other words, management is finally acknowledging in public view the operational inefficiencies created by its hyper-aggressive acquisition strategy, and the company sounds like it will be working to make improvements on this front in future periods. If 3D Systems can deliver on this longer-term promise, it would likely be a welcomed development for often-disappointed investors.