Despite rallying on Wednesday, shares of Apple (NASDAQ:AAPL) are still down more than 10% since the company reported Q3 earnings last month. Ironically, this comes even as analysts have increased their estimates for Apple's FY15 and FY16 earnings in the past few weeks. 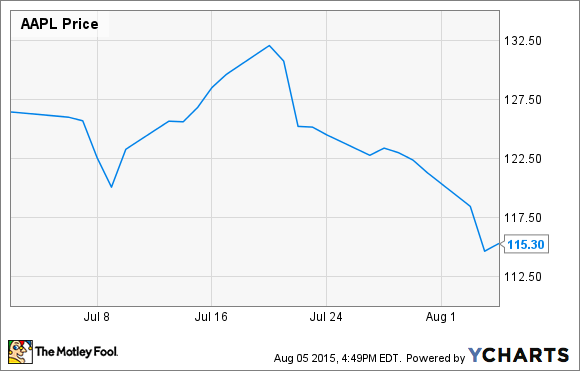 Pundits have laid out a variety of explanations for why Apple stock has suddenly lost steam. Many point to tough sales and earnings comparisons in the coming year. Others cite weakness in China's economy. Worries about Apple Watch demand have been another common refrain.

The key issue in a nutshell
The bizarre aspect of the recent wave of Apple growth worries is that most of the "problems" have been well-known for a long time. (The only possible exceptions are the impact of a possible slowdown in Chinese growth -- which Apple CEO Tim Cook has downplayed -- and the apparently weak Apple Watch sales trajectory.)

For example, a recent AP article blamed Apple stock's recent drop in part on fears of "whether Apple can keep growing at the pace it's maintained over the last few quarters."

These worries have a very clear answer. Apple's sales rose nearly 30% year over year through the first three quarters of FY15, putting Apple on pace for more than $230 billion in annual revenue. EPS rose at an even faster 44% pace. Given these outrageous growth figures for what is already a massive company, investors don't have to "worry" about whether Apple can maintain that growth rate. They can be certain that Apple cannot maintain that growth rate.

Moreover, this fact was equally obvious a year ago. Even when analysts were expecting significantly less growth from Apple during FY15, they were projecting that its growth would slow the following year.

Migrating from growth to value
It was obvious -- or at least should have been obvious -- all along that Apple's 30% growth was a transient phenomenon. (After all, Apple's revenue grew at a single-digit pace in FY14, while net income that year was lower than in FY12.) Nevertheless, Apple's sudden return to growth got a lot of people excited, bringing a lot of growth and momentum investors into Apple stock.

Those types of investors are probably fleeing now. Again, that's not especially surprising given that Apple's growth rate is set to decline in the coming year.

That doesn't mean all is doom and gloom for Apple stock, though. While growth investors are heading for the exits, it's a great time for value investors to buy the stock.

While Apple stock never became particularly expensive despite more than doubling since mid-2013, it is now significantly cheaper than it was just a few weeks ago. Analysts' estimates can be fickle, but for what it's worth, Apple trades for less than 12 times projected 2016 EPS. Backing out Apple's net cash position, the multiple is around 10 times projected 2016 EPS.

For comparison, McDonald's -- a mature business that is fighting just to get sales back to the flat line after more than a year of persistent declines -- trades for more than 19 times the average analyst estimate for 2016 EPS. Plus, it has significantly more debt than cash on its balance sheet.

This high valuation proves that there are plenty of investors who are willing to pay up for value stocks that pay big dividends. Apple stock already yields around 1.8%, and with a payout ratio of less than 25%, it has tons of room to grow that dividend. By contrast, whereas McDonald's has a 3.4% yield, it is already paying out the majority of its earnings as dividends and has little flexibility to pay more.

The value crowd will come
Of course, Apple stock's low valuation wouldn't be much of an investment rationale if Apple's earnings were likely to collapse in the near future. However, while iPhone growth is sure to slow after having a fabulous year, Apple has introduced new products and services to generate incremental revenue, iPad sales may be on the verge of rebounding, and Apple continues to shrink its share count through buybacks.

iPhone sales growth is about to slow, but the iPad could make a comeback next year. Photo: Apple

The result is that Apple should continue to post solid EPS growth in the coming years, albeit not the spectacular growth of FY15.

That's not what the growth investors fleeing Apple stock want to hear. But while Apple's transition from growth stock to value stock has caused it to plummet in the short term, it will also help it bounce back in the long run. All Apple has to do for the stock to move significantly higher is show that its earnings will at least remain stable -- or better yet, grow modestly over time -- while returning most of its free cash flow to shareholders.

These are pretty easy hurdles to jump over. As a result, investors shouldn't expect Apple stock to stay depressed for very long.