Please ensure Javascript is enabled for purposes of website accessibility
Log In Help Join The Motley Fool
Free Article Join Over 1 Million Premium Members And Get More In-Depth Stock Guidance and Research
By Bob Ciura – Aug 6, 2015 at 9:00AM

It's truly amazing to see the market react to a fantastic quarter from Apple (AAPL -1.26%) with such indifference. Shares of the technology giant fell 4% on the day the report was released, and the stock has continued to gradually dip lower -- even though Apple's putting up quarterly numbers that any other company would kill for.

Apple grew revenue, the iPhone average selling price, gross margin, and earnings, all by significant percentages year over year. Yet the market seemed disappointed. For investors wondering how this could be possible, the answer may simply be that Apple once again fell victim to Wall Street's short-term thinking.

Spectacular performance across the board
Apple had an amazing fiscal third quarter. Revenue soared 32% year over year to $49.6 billion. Apple benefited from an increase in products sold, as well as higher prices received for these devices. For example, Apple sold 35% more iPhones last quarter than in the same quarter last year, and the average selling price for iPhones grew $99 to $660, a 17% year-over-year increase. Mac units sold increased 9%, although Apple sold 18% fewer iPads, year over year.

The iPhone continues to be the biggest driver of Apple's growth. iPhone unit volumes and average selling prices both increased nicely, thanks to the continued strong sales of the iPhone 6 and iPhone 6 Plus. This is particularly true in emerging markets such as China, where Apple is firing on all cylinders. Overall, Apple grew revenue by 79% in the emerging markets last quarter, and the emerging markets now represent 35% of total company revenue.

Apple fully expects its growth to continue. Its current-quarter outlook calls for $49 billion to $51 billion of revenue, which would represent 18% year-over-year revenue growth.

Cash continues to pile up
Apple is a cash-flow machine. The company has low capital-expenditure requirements and a manageable debt level, which allows the cash flow to pile up with each passing quarter. Apple generated $60 billion of free cash flow over the first three fiscal quarters and now holds $202 billion in cash, short-term investments, and long-term marketable securities on its balance sheet.

This is despite a very aggressive capital-return program. Apple returned over $13 billion to shareholders last quarter, which included $3 billion in dividends and $10 billion in share buybacks. These buybacks helped Apple reduce its share count by 4.6% last quarter, year over year. The company has done a great job of effectively reducing its share count over the past five years. 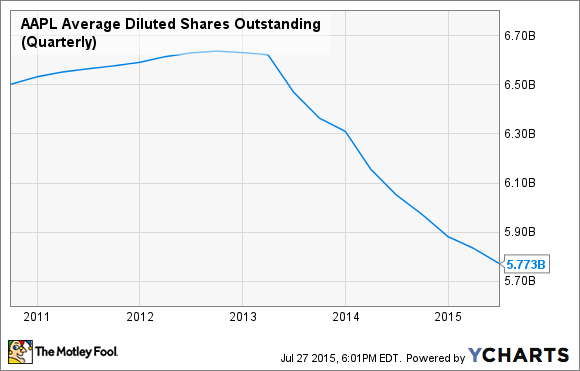 Put simply, Apple has more cash than it knows what to do with. Apple's dividend accounts for just 14% of its free cash flow. I would fully expect Apple to raise its dividend each year for the foreseeable future. Apple will probably also announce a new share-buyback program by the end of the year, as its $6 billion accelerated share-repurchase plan will be completed by November.

Don't succumb to short-term thinking
While Wall Street analysts obsess over whether Apple beat expectations by a wide enough margin, long-term investors shouldn't be discouraged. Apple stock shouldn't be viewed as a trading vehicle, but instead as a long-term investment in one of the world's strongest businesses. People still love Apple's products and services, and if anything, Fools can use the market's typical sell-first-and-ask-questions-later mentality to their advantage to buy Apple at a cheaper price.

Apple stock trades for 14 times trailing-12-month earnings per share and 12 times forward EPS estimates. And Apple offers a mountain of cash to its investors each quarter in buybacks and dividends. The one negative item from Apple's quarterly report was the continued decline of iPad sales, but other than that, the company had a nearly flawless quarter. The stock is cheap, and Apple has one of the best balance sheets around. Don't get caught up in Wall Street's short-term thinking. Apple remains a great company and a stock worth owning.