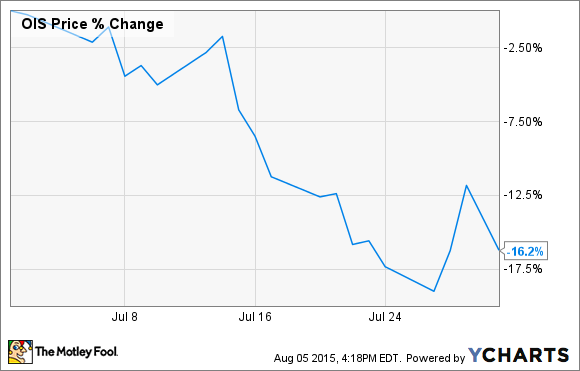 So what: There aren't many companies that were undeserving of a decline in price in July, but the case could be made that Oil States International is one of them. It was able to soundly beat Wall Street earnings estimates during its quarterly report, and the way the company's business is built, it has some ability to to maintain revenue through the down cycle of the industry.

Oil States mostly specializes in selling equipment needed for bringing developed wells into full production. It is tied almost entirely to more expensive barrels of oil because it serves offshore and shale production, but it's involved in the development and construction phase of the development cycle. This is an important distinction in the oil market today because most of the spending cuts from oil and gas producers today are in exploration of new sources rather than the completion of current projects. As long as comapnies are still working on their existing projects, Oil States International should be able to fend off the worst of the oil price decline as of late.

Now what: In the short term, Oil States will be OK as a company. It has a clean balance sheet, a decent amount of cash to cover any shortfalls in the future, and a decent backlog of projects to keep it busy for a while. So much of this oil price decline madness is just noise.

The real question for Oil States is how the decline in exploratory budgets will impact the amount of projects that will be under development three to five years from now. If companies continue to cut exploration budgets, there won't be a whole lot of projects to work on. That, though, is part of the trials and tribulations of investing in any company related to the commodities business. If you are willing to ride out this rough patch, then perhaps you should take another look at Oil States International.