Reflecting the temperature outside these days, the trend for dividend raises is hot. Last week, as in previous weeks, a slew of companies -- 25, by my count -- hiked their distributions.

So we're spoiled for choice in this installment of our continuing series. Nevertheless, we've managed to narrow it down to our usual three picks.

Marathon Petroleum (NYSE:MPC)
This oil refiner is a habitual raiser, and true to form, it's enacted another hefty increase, boosting its quarterly distribution by nearly 30% (adjusted for a recent 2-for-1 stock split) to $0.32 per share. 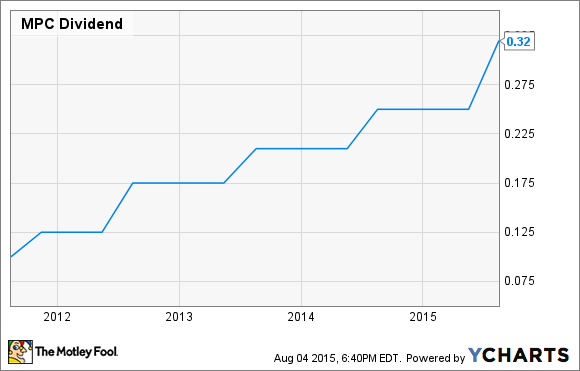 Given the sustained weakness in crude oil prices, the refinery segment is a relatively more secure corner of the energy market. This is because crude prices tend to fall much quicker than those for refined products.

As a result, Marathon Petroleum's numbers haven't been holding up too badly. Yes, in its most recently reported quarter, revenue was down 24% on a year-over-year basis to $20.6 billion, but net profit slid only 3% to $826 million.

What helps is that the company's refineries tend to be placed near sources of cheaper crude, such as the Eagle Ford and Bakken shale plays. This gives it a competitive edge over rivals, and is a key reason why it's been consistently in the black over the years.

As for the dividend, free cash flow in 2014 was over $1.6 billion, or more than three times its total dividend payout. It continues to be profitable, so there's more than enough on hand to support even this latest, chunky raise.

Its dividend will be dispensed on September 10 to shareholders of record as of August 19.

Expedia (NASDAQ:EXPE)
Among our three picks for this week, this online travel specialist is the winner for top raiser in terms of percentage. It's hiked its dividend a generous 33% to $0.24 per share.

Lately, its top-line growth and aggressive expansion have justified this. Q2 revenue rose by 11% on a year-over-year basis to nearly $1.7 billion, with adjusted net profit dropping 14% to $82 million ($0.89 per share).

The latter was comfortably higher than the average analyst estimate of $0.84, however.

This opportunistic firm likes to grow through acquisitions. So far this year, among other deals, it's inked agreements to buy Travelocity for $280 million and Orbitz for a total of around $1.6 billion. 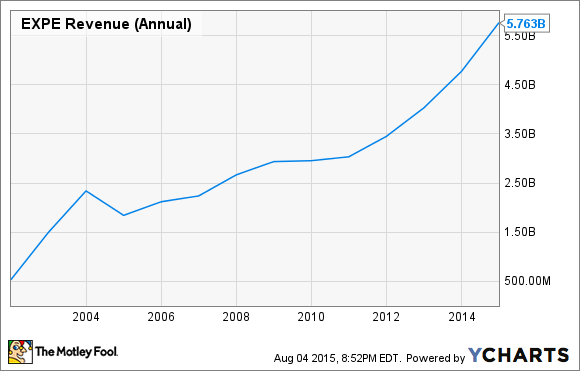 Meanwhile, Expedia consistently lands in the black, which helps maintain a nice level of free cash flow. It's a fairly cautious dividend payer; at the end of the day, it could probably crank it well higher without making too much of a dent in the finances (even with the raise, it yields a mere 0.8%).

Given that the payout is small relative to free cash flow, I'd say that it's sustainable, and that more double-digit raises are likely in store.

Expedia's upcoming dividend will be paid on September 17 to stockholders of record as of August 27.

American National Insurance (NASDAQ:ANAT)
This under-the-radar insurer is a reliable performer that likes to do things gradually. That certainly applies to its quarterly dividend, which has been bumped by 4% to $0.80 per share.

Like death and taxes, American National Insurance's payout is nearly a sure thing. The company's been distributing it for over 100 consecutive years.

What allows it to accomplish this is a conservative approach to its business. Revenue, premiums earned, and net profit have shown remarkable consistency over time, as evidenced by the flat (or at least not explosive) trajectory of all three metrics since 2010. 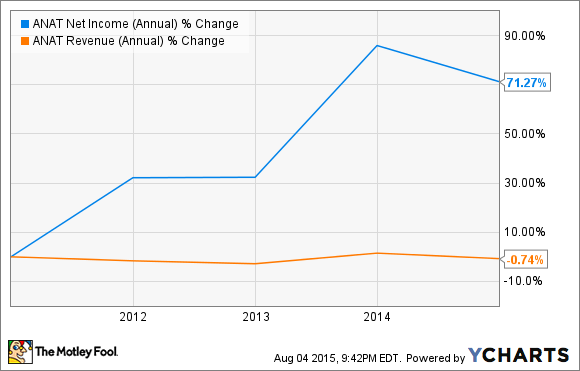 Meanwhile, annual free cash flow typically lands in the mid-nine-figure range every year, well exceeding the $83 million or so the company has handed out recently in dividends.

That sounds ungenerous but at current share prices, the payout yields just over 3%. This is well above market averages, not to mention the insurance segment. And I think the insurer's chance of having a catastrophic quarter are about as likely as a meteor destroying the earth at lunchtime tomorrow. So this payout, in my opinion, is safe.

American National Insurance's next dividend will be distributed on September 18 to shareholders of record as of September 4.