Is Microsoft (NASDAQ:MSFT) stock due for a correction? Although its performance in 2015 isn't particularly noteworthy (up just over 2%) it has modestly outperformed the broader S&P 500 over the last 12 months, rising nearly 10% during that time. 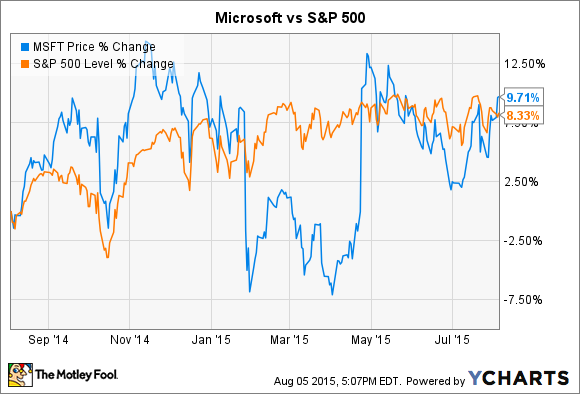 Below are three reasons why Microsoft shares could be headed lower. While a general market rally could buoy the stock even if all three scenarios come to pass, they aren't likely to excite Microsoft investors.

PC shipments continue to drop
Shipments of traditional PCs -- laptops and desktops -- have been in decline for most of the last three years. According to research firm Gartner, PC shipments fell 9.5% on an annual basis in the second quarter, and are on pace to finish the year down 4.4% overall.

Given that the overwhelming majority of traditional PCs run Microsoft's Windows OS, the steady decline of the PC has challenged the company. Last quarter, Microsoft's Windows OEM revenue slipped 22% on an annual basis. Among consumers, the loss has been particularly severe (down 27%), as more are relying on smartphones and tablets for their computing needs -- devices that typically don't run Windows.

Microsoft has successfully managed the transition, shifting its business to cloud services and bringing its software to other platforms. But Microsoft is still betting on a Windows comeback. On the company's most recent earnings call, CEO Satya Nadella laid out the company's expectations, stating that he hoped to have Windows 10 installed on 1 billion devices by Microsoft's fiscal year 2018. Nadella also expects Windows 10 to revive the PC platform, returning it to growth.

But if that doesn't happen -- if PC shipments continue to fall in the coming quarters -- Microsoft's stock could come under pressure.

But Microsoft's management isn't satisfied. By fiscal year 2018, it hopes to have its commercial cloud offerings generating $20 billion per year. Given recent trends, that's certainly possible, but any signs that it may fail to hit that target could weigh on Microsoft's stock. Revenue growth of 88% is significant, but that's down from prior quarters.

Bing remains unprofitable
Microsoft's search engine is less important than the health of the broader PC ecosystem or the demand for the company's commercial cloud offerings. Nevertheless, Bing could weigh on the stock if it fails to achieve the targets Microsoft's management has laid out for it. Bing has long been a source of red ink for the company, costing the Windows-maker billions of dollars since its inception. But Microsoft expects that to change in the near future: it believes Bing will finally become profitable in the next fiscal year.

Bing is an increasingly integral part of Microsoft's other products, as it underpins Microsoft's digital personal assistant, Cortana. Windows 10 includes Cortana, both within the operating system and in Microsoft's new browser, Edge. Microsoft also plans to bring Cortana to Android and iOS.

But if that doesn't happen -- if users continue to turn elsewhere for search -- Bing could remain disappointingly unprofitable, and that disappointment could weigh on Microsoft's stock.