Who can fault a restaurant chain for wanting to grow quickly, especially when growth looks this appetizing? Shake Shack burger and fries image courtesy of Flickr user m01229, under Creative Commons license.

The fast casual restaurant business has introduced a number of best practices to the overall restaurant industry, among them a focus on fresh, responsibly sourced ingredients. But it also has its foibles. Here are a few quotes from recent SEC filings of well known IPOs in the fast casual industry -- see if you can spot a pattern:

"We utilize a sophisticated site selection process using proprietary methods to identify target markets and expansion opportunities within those markets. Based on this analysis, we believe there is substantial development opportunity in both new and existing markets. We expect to double our restaurant base in approximately four years." -- Zoe's Kitchen Inc (NYSE:ZOES) S1 Filing

"Our selection process uses proprietary methods to identify target markets and expansion opportunities within such markets. Based on this analysis, we believe there is opportunity for substantial development in both new and existing markets, and we expect to double our restaurant base over the next four years. -- Habit Restaurants Inc (NASDAQ:HABT) S1 Filing

"With only 63 Shacks around the world, as of December 31, 2014, we have identified many attractive new markets for the Shake Shack experience...We currently expect at least 10 new domestic company-operated Shacks to be opened throughout the year, [and] at least five international licensed Shacks to be opened under the Company's current license agreements in the U.K. and Middle East..." -- Shake Shack Inc (NYSE:SHAK) 2014 Annual Report

Aside from the strange similarity between the wording of Zoe's Kitchen's and Habit Burger's statements (found in their respective pre-IPO prospectuses), all three companies have set their future store opening goals at a compound annual growth rate, or CAGR, of roughly 19%. So what's wrong with a little growth?

It's become a business cliche to point out that nearly every new entrant to the public markets in the fast casual sector wants to become the next Chipotle Mexican Grill (NYSE:CMG). Though it's slowed down a tad in recent years, CMG still boasts an annual store-opening CAGR of 15.46% since going public in 2006, and this number certainly drives the thinking behind the quotes above.

A rare bird, increasingly hard to sight
Chipotle proved that a quality product sold in a niche market (fast casual Mexican-themed food), offered at a reasonable price and prepared to socially conscious standards, could provide the means to rapid, profitable expansion. Yet many factors combined to create Chipotle's trajectory. The company was one of the first to exploit a change in consumer tastes away from prevailing fast food options, at the time dominated by McDonald's Corporation (NYSE:MCD). For a long while, Chipotle didn't have competition to speak of in the fast casual space.

In addition, Chipotle was, and still is, one of the very best restaurants in the industry at understanding the importance of throughput (the rate of sales in a given time period), and has improved its metrics in this area relentlessly. Finally, during the eight years running up to its IPO, Chipotle was able to hone its operational skills while backed and mentored by a deep pocketed investor with unparalleled industry experience -- McDonald's.

The chances of market demand, product innovation, investment, and execution aligning again as they did for CMG aren't non-existent, but they're slim, and realistically, untold numbers of investors will search in vain for "the next Chipotle." In fact, in various segments of the fast casual industry, there are now simply too many accomplished players -- higher-end burger joints, for example -- gunning for the same customers. At least Zoe's has some breathing room here in the relatively uncrowded Mediterranean fast casual space.

Is this really a promise we should believe?
Attempting to open stores at a CAGR in the very high teens in pursuit of market dominance is the single worst practice of fast casual restaurants. You'll find no lack of restaurants that want to promote this goal, and no shortage of investors who want to believe that such a rate is sustainable. Of the different ways to sell promise to investors, a crowded slate of store openings stretching into the future is much easier to put forward than, say, forecasting steady comparable store sales increases.

The reality is that ultra-brisk location launches eat up capital and take focus away from optimizing operations (although models in which restaurants are nearly 100% franchised can be an exception). Still, the drive to expand rapidly has permeated most of the fast casual IPOs of the last two years. For a reality check, I went back and reviewed all of Chipotle's annual reports going back to the year before its IPO. From 2005 to present, Chipotle managed a store opening growth rate higher than 18% in only three years. And during this period, the company hasn't been able to double its store count in any four year stretch.

Dangling these types of store growth rates in front of investors means that almost out of the gate fast casual chains burden themselves with unrealistic expectations and frothy valuation multiples. Take a look at the astronomic forward earnings multiples of Zoe's, Habit, and Shake Shack: 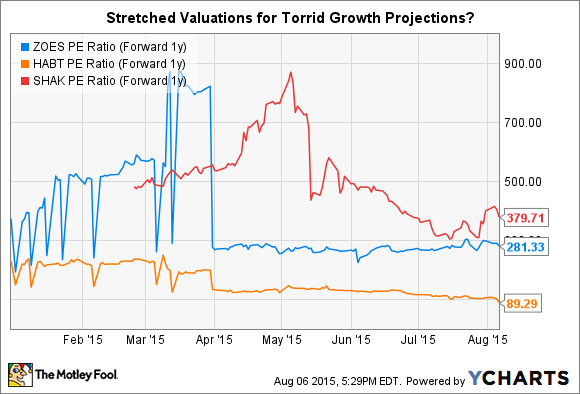 Clearly, such imbalances aren't sustainable. What rate of store openings, then, makes sense for the long-term? We can look to another recent fast casual IPO, El Pollo Loco Holdings Inc (NASDAQ:LOCO), for a possible answer. The company's management thinks that an annual store growth rate of 8%-10% is fairly aggressive, but achievable.

What might seem in normal times a lofty target, however, is quite unpopular with investors these days. "Loco" sells for just 23 times 1 year forward earnings -- even less than Chipotle's 36 times forward earnings. The company has faced tough comparisons with its peers from starry-eyed investors all year, and will have to earn its own appreciation. But for the patient and the risk averse, this may not be a bad promise to put faith and a little money behind.