What: Shares of GoPro (NASDAQ:GPRO) rose 17.8% in July, according to S&P Capital IQ data, on the heels of the action camera specialists' strong second quarter results and a number of new product announcements. As it stands, the recent rise has helped GoPro recoup nearly all its losses from earlier in the year. 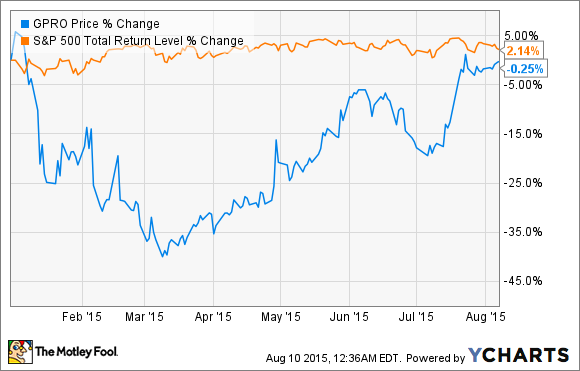 So what: First, on July 6, 2015, GoPro unveiled its smallest camera yet in the HERO 4 Session. With a premium price tag of $399 -- the same price as its higher-end HERO4 Silver model -- the HERO4 Session should afford GoPro relatively attractive margins going forward. Then on July 20, 2015, or the eve of its quarterly announcement, GoPro launched a new premium content licensing portal aimed at enabling global advertising brands and agencies to seamlessly license GoPro's massive library of video and images, while at the same time "reward its inspirational creator community." Perhaps most important for investors, this portal is a big step for GoPro in more effectively monetizing its content as it strives to become a media company, and not "just" a hardware device maker.

In addition, we can't forget GoPro CEO Nicholas Woodman confirmed in May that GoPro intends to launch a commercial quadcopter in early 2016, paving the way for it to seize a significant chunk of the estimated $1.9 billion consumer drone market. And as evidenced by its new multi-camera arrays and acquisition two quarters ago of "spherical media" company Kolor, GoPro is also moving aggressively to become an early leader providing content for the multibillion-dollar virtual and augmented reality industry. As long as GoPro's current hardware products continue to perform with such strength in the meantime, it's no surprise the market has driven shares of GoPro up so aggressively in recent months.