You can't be entirely upset with management at American Public Education (NASDAQ:APEI) -- the for-profit college that focuses primarily on military personnel. When the company announced earnings in May, it said that the second quarter would be a tough one. And they were 100% correct.

To get an idea for what we're talking about, look at the expectations laid out three months ago, compared with what the company provided when it released earnings Monday.

As you can see, the company actually reported numbers that came in on the favorable end of their range in almost every metric. But there are two problems with this picture. First, just because APEI met expectations doesn't mean it wasn't an ugly quarter. And second, the company's outlook moving forward is just as bad.

Analyzing a for-profit educator's income statement and balance sheet are only worth your time if you have a school that has a stable or growing base of enrolled students. Without that, long-term investors are just wasting their time by digging into the company's finances.

That's an important caveat, because it helps explain why APEI's stock is down more than 50% since early 2014. No metric is more indicative of where the school is headed than new student enrollments. Unfortunately, APEI doesn't break that number out, instead offering up net course registrations by new students. Here's how that figure has trended over the past two years. 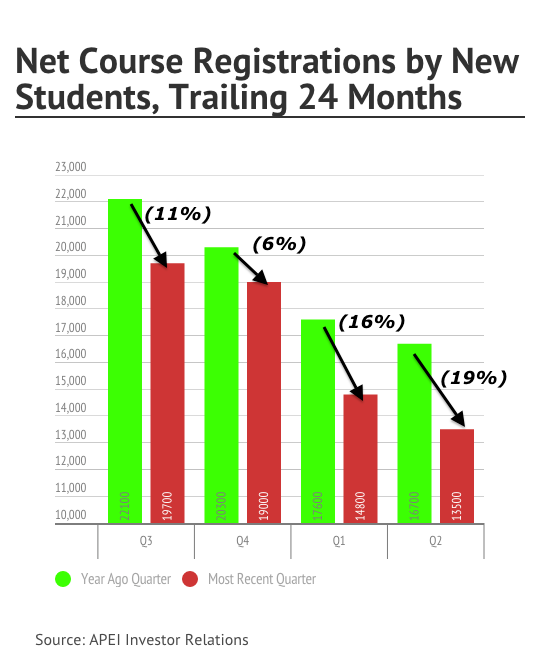 As you can see, this is decidedly not a good trend. Management said that the shortfall this quarter was due to a 32% decline in net course registrations by new students using Federal Student Aid (FSA) as their primary source of tuition funding. This is bad news on a couple of fronts.

APEI has been heavily reliant on funding from the military through its Military Tuition Assistance (TA) program for active duty personnel and Veterans Affairs (VA) benefits for retired personnel. Together, these two combine for over 55% of all funding.

Over the past few years, management has wanted to develop more stable revenue streams by attracting civilian students into its schools. Those students typically use FSA to help fund their education. With new student registrations using FSA dropping so precipitously, the company is becoming more reliant and vulnerable to any changes the military might put in place for future for-profit tuition assistance.

Not a pretty outlook
But perhaps the largest reason for Tuesday's stock-price drop (down nearly 14% at 1:45 p.m.) was APEI's outlook for the next fiscal quarter. Here's what Wall Street thinks the company should be bringing in, compared what management believes the next three months will look like.

CFO Rick Sunderland said that this was due to "increased competition for students and to challenges in the military market, as well as the implementation of a new admissions process in a more targeted and narrow geographical approach."

In other words, APEI is trying to get higher quality students who will actually complete college. As for-profit colleges as a whole (and to a lesser extent, APEI) have made a lot of money from students who couldn't attend traditional 4-year institutions and don't complete their degrees, this means the pool of potential students is shrinking. Not only that, but this smaller pool is likely more savvy, desires a degree from a traditional school, and is aware of the negative press surrounding for-profits.

Given these headwinds, investors should ready themselves for a tough end to 2015 and hope for better things to come in 2016.

American Public Education, Inc. Said There'd Be Days Like This, and the Market Doesn't Like It @themotleyfool #stocks $APEI Next Article
Current