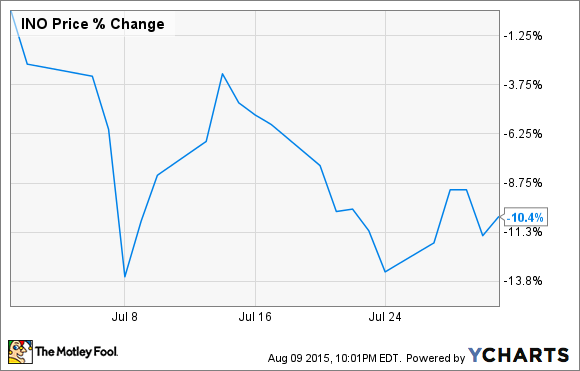 What: Shares of the clinical-stage DNA-vaccine maker Inovio Pharmaceuticals (NASDAQ:INO) shed more than 10% of their value last July. Interestingly enough, though, this downturn lacked a clear, company-specific catalyst. Inovio's double-digit drop, instead, appears to be linked to the sectorwide onslaught that saw approximately 60% of all small-cap biopharmas head lower during the month, presumably stemming from the Greek financial crisis. In fact, we saw nearly 27% of this entire cohort of stocks fall by more than double digits for the month. It's also worth noting that since the beginning of August, shares are back up almost 5%.

So what: Inovio's lead experimental product, VGX-3100, a DNA-based vaccine designed to treat cancer and pre-cancers of the cervix caused by human papillomavirus, is set to enter a pivotal late-stage study in early 2016. If all goes according to plan, this study is expected to report top-line data in 2018. So Inovio is most likely going to be dependent on its various research collaborations with bigger pharmas like AstraZeneca and government agencies, and unfortunately secondary stock offerings, as its main sources of revenue for at least the next two to three years. That's why this next-gen vaccine-maker's stock is probably going to remain volatile for the foreseeable future.

Now what: One wild card that could come into play before VGX-3100's pivotal data readout is a buyout. After all, vaccine makers are frequently snapped up by larger companies, and several major pharmas such as GlaxoSmithKline, Merck, and Pfizer have all been actively reshuffling their vaccine product portfolios of late. That said, buyouts in the pharma industry have been notoriously difficult to predict and often come out of left field. So you may not want to buy Inovio hoping for a quick profit via a buyout and instead keep the company's prospects of furthering its clinical pipeline firmly in mind before picking up shares.