What: Shares of Yelp (NYSE:YELP) fell 38.6% in July, according to S&P Capital IQ data, driven in part by the local business review specialist's disappointing guidance in spite of solid second-quarter results. So far in 2015, Yelp has fallen more than 50%: 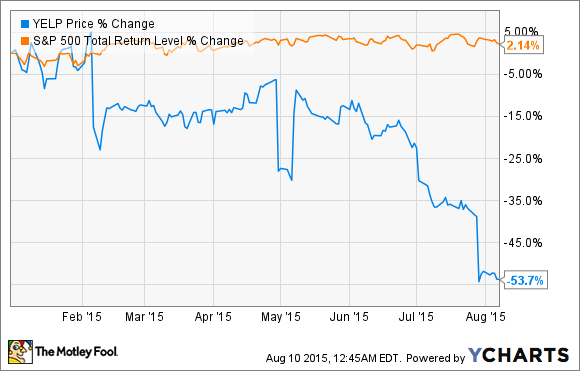 So what: It didn't help that Yelp had a rough start to the month, with shares dropping more than 11% after Bloomberg reported that the company had decided to hold off on chasing a possible sale. Specifically, Bloomberg quoted "people with knowledge of the matter" as stating Yelp had "several interested suitors" but that it wouldn't pursue a transaction unless co-founder and CEO Jeremy Stoppelman changed his mind.

But then toward the end of the month -- after Yelp's second quarter beat analysts' expectations on both the top and bottom lines -- Yelp stock plummeted another 25% after it issued full-year revenue guidance for a range of $544 million to $550 million, down from its previous expected range of $574 million to $579 million. By contrast, Wall Street's models had called for significantly higher 2015 revenue of $571 million.

Now what: Yelp CFO Rob Krolik blamed the reduction on slower-than-expected growth in Yelp's sales headcount, as well as the phase-out of its fledgling brand advertising products. In theory, the latter should allow Yelp to place more focus on its local advertising business, from which it aims to generate at least $1 billion in annual revenue by 2017. However, it's also worth noting that growth in mobile unique visitors -- one of Yelp's brightest spots in the report -- decelerated to 22% year over year, down from 29% last quarter, while declines in Yelp's desktop visitors remained steady at around 3.3%.

Arguably just as concerning was a separate press release that day announcing that Yelp's chairman and co-founder, Max Levchin, had resigned to "pursue other interests." To be fair, Levchin insisted in a statement that Yelp remains "well positioned to take advantage of the large local advertising market," while he intends to increase his focus as CEO of lending start-up Affirm.

But that's little solace to Yelp investors who've endured these losses so far in 2015. Until Yelp can prove it has what it takes to reaccelerate growth in its core markets, it seems fair to expect that the stock will remain under pressure.