Dividends are an investor's best friend. They can provide income, boost your returns, and provide your portfolio with stability through unstable times -- that is, so long as you choose your dividend stocks wisely.

Within the S&P 500, there are 54 stocks whose dividends stand head and shoulders above the rest. They're known as the Dividend Aristocrats, and they've each increased their annual dividend payouts for at least 25 straight years.

Even more impressive than that, the three stocks we'll highlight here are all financial stocks, meaning they've increased their dividends even through the worst financial crisis since the Great Depression.

T Rowe Price
First up is asset management company T Rowe Price Group (NASDAQ:TROW). T Rowe Price was founded in 1937 and makes its profits through the management of mutual funds sold to individual and institutional investors. The company has increased its dividend for 29 consecutive years and counting. The dividend currently yields 2.7%.

The company's second quarter was impressive, boding well for the future of this long-running dividend. Earnings per share for the quarter were $1.24, beating analyst expectations and representing a solid increase from the year-ago quarter's EPS of $1.13.

Driving the improvement were higher fees associated with a 3.5% rise in assets under management, offset slightly by a 10.4% jump in year-over-year operating expenses.

Even more enticing for the long term is T Rowe Price's balance sheet and free cash flow. The company reports no debt, $1.27 billion in cash on hand at quarter end, and $1.31 billion in free cash flow over the past 12 months.

These numbers are critical for the long term health of the dividend. Because the numbers are so strong, the company is well positioned to pass all that cash flow on to shareholders quarter after quarter instead of being forced to use cash for debt service or building reserves,. 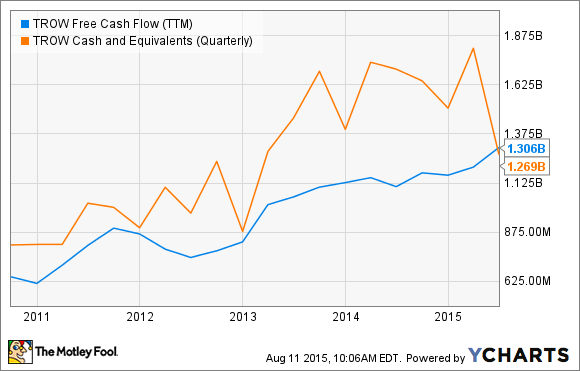 Aflac
Next, let's zero in on an insurance company in the ranks of the Dividend Aristocrats, Aflac (NYSE:AFL).

Aflac has increased its dividend for an impressive 32 consecutive years, with the current dividend yielding 2.5%.

Aflac reported a tough quarter ending June 30, with total revenue declining 9.4% year over year and earnings per share dropping to $1.32 from $1.78 last year. It's worth noting, however, that Aflac does a considerable portion of its business in Japan, and a large part of the second quarter's financial decline was driven by currency fluctuations between the U.S. dollar and Japanese yen.

Excluding the currency fluctuations, the fundamental business is performing well, prompting the company to raise its earnings outlook for the rest of 2015 by 4%-7%, with the caveat that changes in the dollar/yen exchange rate could impact the outlook.

Looking longer term, Aflac's brand, business model, and market position all remain stable. One in four Japanese households owns an insurance policy written by Aflac. The company is also the largest provider of supplemental insurance in the U.S.

Some investors were concerned that changing legislation in the U.S. driven by the Affordable Care Act would hurt Aflac's prospects long term. So far those regulatory changes haven't had a notable impact on the company's financials. Revenue, cash on hand, and free cash flow are all in line with long term levels with no signs of breaking the trend.

Franklin Resources
Finally, we return to the world of asset management with Franklin Resources (NYSE:BEN), better known as Franklin Templeton Investments. Franklin has been steadily increasing its dividend for 35 consecutive years. The dividend currently yields 1.3%.

Franklin's quarter ending June 30 was pretty disappointing at first blush. The company reported profits of $0.82 per share, missing Wall Street estimates by about a nickel.

The root problem could very well be short-term in nature, driven by exposure within Franklin's various funds to energy companies that have been hammered this year by falling oil prices.

One example to illustrate the issue is Franklin's positions in the debt of Peabody Energy. The price of that debt has fallen by over 50% this year, and Franklin is one of its largest holders.

Energy prices are volatile by nature, and it is not unreasonable to expect this year's trend in that sector to reverse and return to prior levels. Energy prices have gone down and back up time and again throughout history. At the same time, management at Franklin is certainly taking steps to mitigate the problem; you don't increase your dividend for 35 consecutive years without knowing a thing or two about weathering a tough, short-term storm.

In the meantime, Franklin has $8.4 billion in cash on its balance sheet and $2.5 billion in free cash flow on a trailing twelve month basis to lean on to keep the dividend checks coming. 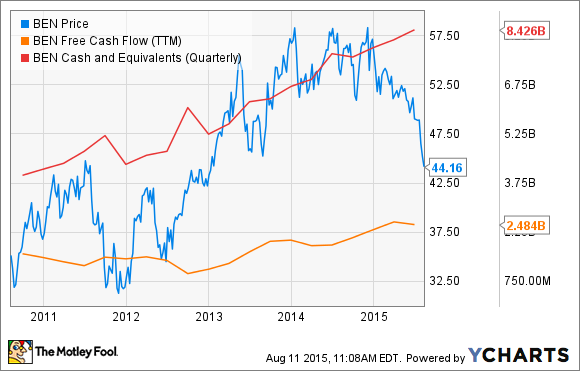 Whichever of these three financial stocks you like the most, their individual accomplishments over the past few decades are extremely impressive. While banks, money managers, and other financial firms were cutting dividends or even going bankrupt during the financial crisis, these three firms kept the shareholder payments coming.

To me, these three stocks truly are the Aristocrats of the financial sector.