Please ensure Javascript is enabled for purposes of website accessibility
Log In Help Join The Motley Fool
Free Article Join Over 1 Million Premium Members And Get More In-Depth Stock Guidance and Research
By Tyler Crowe, Dan Caplinger, and Jason Hall – Aug 16, 2015 at 11:05AM

It may not be the bottom for metal prices yet, but when it comes, you might want to be ready to pounce on these three stocks.

For the past couple of years, anyone with an investment in the metals and mining sectors has been saying to themselves, "The market has to turn around." Despite this optimistic thought, prices for almost all commodities, from precious metals like silver and gold to base metals like iron ore and copper, have steadily declined. Perhaps we're close to an inflection point for the metals and mining sectors, or perhaps were not. With so many factors influencing prices, it's almost impossible to say.

That doesn't mean, however, that you should ignore this sector entirely. So we asked three of our contributors to each share a company that they are keeping a close eye on as a potential buy when the market turns.

Tyler Crowe: Steel, like any other commodity, is a cyclical product. That doesn't mean, however, that the industry is devoid of structural changes. The biggest change is the transition away from the traditional blast furnace methods of manufacturing steel to more efficient electric arc furnaces and direct-reduced iron, and there is one company that has been at the forefront of this transition: Nucor (NUE 6.86%).

In the middle of this downturn, Nucor has been making several moves to improve its position in the steel market, such as the 2012 acquisition of Skyline Steel and its $750 million investment in a direct-reduced iron (DRI) manufacturing facility in Louisiana. All told, the company has spent close to $6 billion on strengthening its position over the past five years. Not only will this pay off when the market does rebound, it's actually starting to pay off now. Over the past five years Nucor has doubled its cash generated from operations, and its most recent quarters have been some of the best on record.

Slowly but surely, the transition from blast furnaces to electric arc and DRI is taking hold. About 60% of all steel manufactured in the U.S. today is from DRI and electric arc furnaces, and that is expected to increase to more than two-thirds in a couple of years. Of all the companies in the U.S. steel-making market, Nurcor is in the best financial position to capture market share during this transition. Its $1.6 billion in cash on the books and very manageable debt position give it plenty of wiggle room to make even more investments to solidify its position.

Even if the market for steel doesn't turn around anytime soon, I'd still be comfortable owning shares of Nucor today.

Dan Caplinger: Precious metals have gotten hit hard by the downturn in commodities generally, and silver has lost more ground than gold over the past year. That has been bad news for silver-streaming specialist Silver Wheaton (WPM 3.92%), which offers financing to mining companies in exchange for interests in the streams of bullion that they produce. As a result, when metals prices fall, Silver Wheaton's profits from its deals go down.

Silver Wheaton offers two ways to reap investment gains when the metals markets hit bottom. First, its direct exposure to silver and gold prices causes profits to rise along with those precious metals when conditions are favorable. Moreover, Silver Wheaton also profits from being able to do new deals with mining companies that are eager to start producing on promising mining properties. The downturn in silver and other metals has dramatically reduced the willingness of most miners to move forward with new projects, but once they hit bottom, pent-up demand could lead to a need for more financing and help bolster Silver Wheaton's range of possible opportunities.

Silver Wheaton is far from risk-free, as its roughly 40% drop so far in 2015 shows quite well. Nevertheless, if metals hit bottom, Silver Wheaton should rebound even more sharply than its peers in the mining industry.

Jason Hall: Just about every kind of metal, whether precious or industrial, has fallen sharply over the past half-decade, and ArcelorMittal (MT 5.88%) has been doubly exposed. This global giant is both one of the world's largest steelmakers and a key iron producer, and it's been ugly out there: 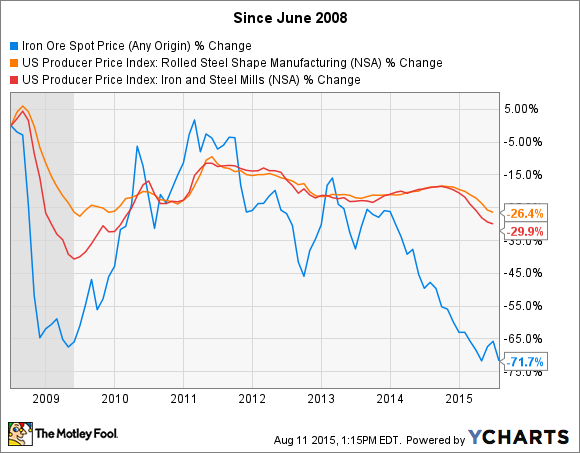 The chart above shows U.S. prices, and while ArcelorMittal does much of its business outside the U.S., global iron and steel prices are down just as much, and weak demand in Europe has especially weighed on the company. Over the past few years, the company has reported massive losses, but most of those losses have been non-cash in nature as the company went through a major restructuring.

While the downside of that restructuring included shuttering several plants and cutting jobs, the company is now leaner and better scaled based on current demand. Once the cycle of demand rebounds and prices for steel and iron recover, ArcelorMittal is positioned to be a big beneficiary.

Dan Caplinger has no position in any stocks mentioned. Jason Hall owns shares of ArcelorMittal. Tyler Crowe has no position in any stocks mentioned. The Motley Fool recommends Nucor. Try any of our Foolish newsletter services free for 30 days. We Fools may not all hold the same opinions, but we all believe that considering a diverse range of insights makes us better investors. The Motley Fool has a disclosure policy.