Because of the importance of the annual iPhone upgrade cycle to Apple's (NASDAQ:AAPL) business, this question comes up each and every year. Without fail, Apple has been able to enjoy meaningful unit growth every year with iPhone refreshes. The company does so by cleverly utilizing the tick-tock product cycle that it adopted years ago, while highlighting a headline selling feature (or two) with each new model.

People have been talking about the law of large numbers for years as it relates to Apple's seemingly limitless ability to continue growing, but this discussion is not misplaced. As Apple continues marching higher with iPhone unit sales, eventually it has to face some deceleration, right?

What if that's this year?
To be clear, when Apple inevitably posts negative iPhone unit growth (gasp!), investors should not fret too much. But they will. "iPhone sales post first-ever annual decline" is simply too enticing of a headline, and it'll surely rattle some investors when it hits the press. Eventually, it will happen, as growth off such a large base becomes increasingly difficult each year. In fact, it's a wonder that Apple has been able to put up positive unit growth quite literally every single quarter since the iPhone's inception.

It's conceivable that this might even happen this year. The iPhone 6 and 6 Plus upgrade cycle has been utterly massive. The double-edged nature of that statement is that while Apple is selling more iPhones than ever before, it creates a tough comparison for the subsequent cycle. Consider this chart of unit growth over the past few years (I omitted the earliest years because the growth of over 500% in some quarters off extremely small bases skewed the chart). 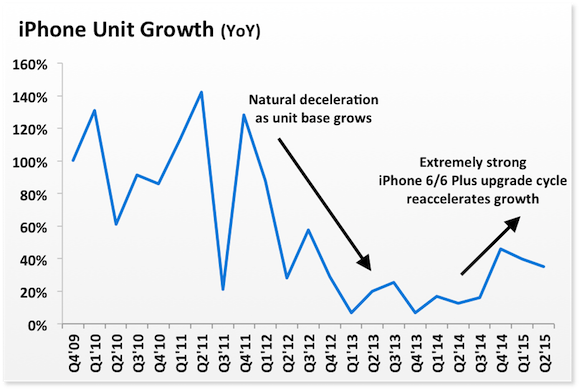 Looking at growth in percentage terms only paints part of the picture though. Let's look at the actual numbers in absolute terms. Here is an approximate representation of iPhone unit sales characterized by the flagship of that product cycle. Starting in 2012 with the iPhone 5, Apple moved its iPhone launches from October to September, which also moves the launch to an earlier fiscal quarter. Since Apple typically announces launch weekend sales figures, I've accommodated for the timing discrepancy by shifting those totals into the appropriate cycle. 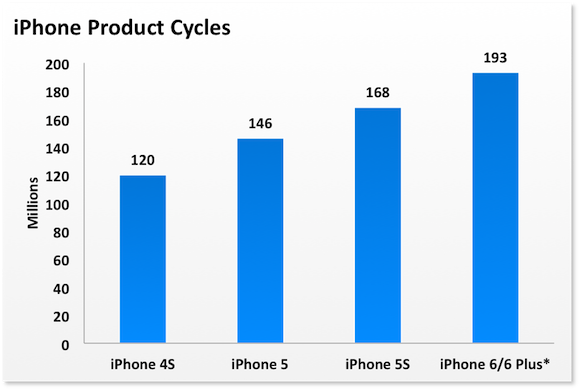 Source: SEC filings and author's calculations. Calendar quarters shown. *iPhone 6/6 Plus cycle is not yet complete.

Notice how strong the 6 and 6 Plus cycle has been, and it isn't even over yet. After everything is said and done, the 6/6 Plus cycle will easily be over 200 million units. There should be no question that Apple's move to larger displays has been incredibly successful.

Back to our initial question: Can the iPhone 6s upgrade cycle drive growth off such a large base?

Brace yourselves, Apple investors
KGI Securities analyst Ming-Chi Kuo, one of the more accurate analysts of the Apple bunch, estimates that Apple may sell between 65 million and 75 million iPhone 6s and 6s Plus units in the fourth quarter. If that plays out, that would at best represent about 0% growth since Apple sold a mind-boggling 74.5 million iPhones in Q4 2014. There are two primary reasons why Kuo is playing it relatively conservatively.

First off, China's economy continues to experience a macro slowdown, and China has been largely driving iPhone unit sales recently (up 87% in China last quarter). While China is still very likely to become Apple's largest market some day soon, despite the recent yuan devaluation, a near-term speed bump is entirely possible. Especially if a large portion of the user base there just upgraded to the 6 or 6 Plus for the larger display.

Additionally, Force Touch looks like it will debut on the 6s and 6s Plus, which may be a weak selling feature compared to prior years. If it wasn't clear by now, the larger display in the 6 and 6 Plus has been a very strong selling feature. Thus far, Apple has introduced Force Touch on Apple Watch and MacBooks, and the initial response has been fairly tepid, since most software applications only make limited use of the new interface function.

The point here is that it's entirely feasible (although not necessarily likely) that the iPhone 6s and 6s Plus cycle fails to generate positive unit growth, but that's totally fine. Just maintaining unit volumes of this magnitude while enjoying nearly all of the smartphone industry's profits is accomplishment enough.