Wall Street switched into freak-out mode after Disney (NYSE:DIS) revealed in its latest earnings report that ESPN isn't bulletproof after all. It turns out that subscriber numbers are drifting lower as TV watchers shift away from bundled cable packages and get pickier about the channels they want to pay for. CEO Bob Iger said in a conference call with investors that, while technology is disrupting the media business, executives still have "enormous confidence in ESPN's future."

It's a challenge worth watching since a big slice of Disney's profits come from the fees it charges broadcasters for the rights to carry the sports network. But The House of Mouse isn't exactly struggling to produce earnings growth right now. In fact, it has generated 15% higher profits over the last nine months, equating to $900 million of extra income.

The biggest contributor to that gain isn't Disney's ESPN-anchored media empire, or the Pixar and Marvel-fueled studio business, or even the blockbuster parks and resorts segment.

It's actually merchandise sales that are powering record results at Disney these days. Despite accounting for less than 10% of all revenue, the consumer products unit is kicking in 39% of profit growth so far this year: 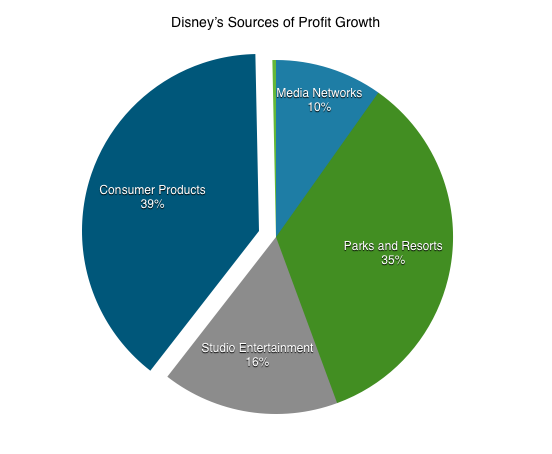 Disney's business is heavily tilted toward media networks, which accounts for 45% of sales. Next comes parks and resorts with 30%, and then studio entertainment's 15%.

The consumer products business
The consumer products segment is the company's fourth largest business unit. Last quarter, revenue tied to brands including Frozen and Avengers rose by 6%, continuing the strong 13% growth experienced over the past nine months. That makes consumer products the fastest-growing of Disney's five divisions. But profits have spiked even faster than revenue: up 37% over the last three quarters. The resulting 40% operating margin also makes this segment Disney's most profitable, by far:

Disney counts 11 brands that are each responsible for over $1 billion in annual retail sales. Frozen and Avengers were added to that impressive list this year, joining Pooh, Disney Junior, Spider-Man, Monsters, Cars, Mickey, Minnie, Princess, and Star Wars.

A forceful end to the year
The Star Wars brand is the one with the most potential to expand through the rest of this year. Ahead of the launch of the Star Wars: Episode VII movie, Disney has planned a global retailing event on Sept. 4 aimed at introducing thousands of products related to the LucasFilm franchise.

But that's just the beginning of a Star Wars licensing bonanza that stretches across toys, merchandise, and even video games. Starting next quarter, Disney will be collecting royalty checks from game publisher Electronic Arts tied to its Star Wars: Battlefront game that also launches in December. The licensing payments are projected to be so big that EA's management believes they'll push the company's overall profitability lower. But they think it's worth the earnings pinch to establish a new franchise around this hit brand.

Since retailers around the world are loading up on Star Wars merchandise ahead of September's product launch, the brand is already helping Disney's consumer products sales. Investors can expect that licensing momentum to build as we get closer to the movie's actual Dec. 18 launch date.