Please ensure Javascript is enabled for purposes of website accessibility
Log In Help Join The Motley Fool
Free Article Join Over 1 Million Premium Members And Get More In-Depth Stock Guidance and Research
By Adam Levine-Weinberg - Aug 16, 2015 at 10:20AM

Macy's is starting to get serious about monetizing its real estate, but can that offset the impact of weak sales performance?

Top department store-operator Macy's (M 1.73%) has come under increasing pressure to get some value out of its real estate this year. Recently, other department store chains, such as Sears Holdings (SHLDQ), have gotten huge windfalls from selling and spinning off their valuable real estate holdings.

Activist investors want Macy's to sell or spin off its real estate. Photo: The Motley Fool

Most notably, Starboard Value -- a hedge fund known for its activist approach -- announced last month that it had purchased a stake in Macy's and started pushing for it to separate its real estate from the rest of the company. In the past, Macy's had resisted the idea of spinning off its real estate.

However, with sales continuing to stagnate, a real estate spinoff -- or some similar transaction -- is starting to look more appealing. Starboard chief Jeff Smith estimated the value of Macy's real estate at $21 billion last month -- and that's almost exactly what the entire company's market cap is today.

Sales growth grinds to a halt
While struggling rivals like Sears have been doing big real estate deals for several years now, strong sales and earnings growth insulated Macy's from the need to try this in the past few years.

As the chart below shows, revenue and earnings per share bounced back strongly in the first few years after the Great Recession. However, sales growth slowed to a crawl starting in 2013. For a while, EPS continued to grow as Macy's closed some underperforming stores and bought back stock to shrink its share count, but now EPS growth has also stalled out. 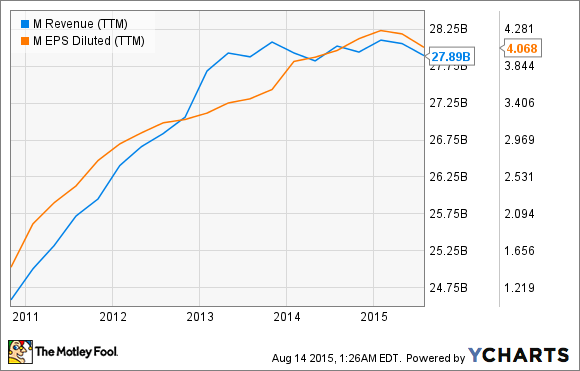 This week, Macy's reported its second straight quarterly earnings miss. For the first half of the year, EPS declined 15% year over year, from $1.40 to $1.19. Due to weak sales in the first half of 2015, Macy's cut its full-year guidance. It now expects comparable store sales to be about flat for the full year, compared to its original guidance for 2% comp growth.

In spite of the weaker-than-expected sales performance, Macy's maintained its guidance for full-year EPS to rise to $4.70-$4.80. The reason? You guessed it: real estate.

Real estate saves the day?
On the same day as its Q2 earnings release, Macy's also announced plans to sell the upper floors of its store in Brooklyn and an attached parking garage to real estate company Tishman Speyer. It will net a gain of $250 million on the sale, bringing in total proceeds of $270 million: $170 million in cash and $100 million to fund a full renovation of the remaining 310,000 square foot store.

A month earlier, Macy's had announced another real estate transaction, selling its downtown Pittsburgh store to Core Realty. In that case, the Macy's store is being shut down.

These moves show that Macy's is starting to take a more active approach toward monetizing its real estate. Both of these transactions were one-off deals that by themselves will have only a small impact on Macy's value. However, the company has also started working with advisors to formulate potential strategies for maximizing the value of its real estate, according to CFO Karen Hoguet.

Sears has sold or spun off most of its best real estate in the past few years. Photo: Sears

Sears has gone much further down the road of monetizing its real estate. In 2012, Sears sold 11 stores -- including a highly desirable location in Honolulu's Ala Moana Center -- to General Growth Properties for $270 million. Between 2012 and 2013, Sears sold the leases for about a dozen high-profile stores in Canada back to the landlords for well over $0.5 billion.

To cap it all off, Sears created a REIT called Seritage Growth Properties, with interests in nearly 300 Sears properties. Sears executed a giant sale-leaseback agreement with Seritage -- generating proceeds of $2.7 billion -- and spun it off to shareholders last quarter.

These lucrative real estate transactions are almost certainly the only reason why Sears has managed to survive this long despite its terrible sales trends. Given that Macy's doesn't have a money-losing retail operation dragging it down, does this mean that by selling or spinning off its real estate, it could generate a big windfall that could be returned to shareholders?

Unlocking real estate value isn't magic
To some extent, the answer is yes. However, investors need to recognize that there's no magical way for Macy's to get value out of its real estate. Its New York, Chicago, and San Francisco flagships are all extremely valuable buildings, but no matter how their ownership is structured, they will still generate the same amount of profit. The only question is how to divide that pie between Macy's and (theoretically) a real estate company.

The way that retail real estate separations create real value is by converting properties to more efficient uses. That's what's happening in Brooklyn and Pittsburgh, where Macy's is downsizing and closing its stores, respectively.

That's also what Sears has done across the U.S. and Canada, vacating high-profile malls in favor of more successful retailers (primarily Nordstrom) that can afford higher rents. Insofar as Macy's is already earning good returns on most of its stores, the upside from selling or spinning off its real estate is correspondingly lower than for Sears.

That said, there are tax benefits to separating the real estate as a REIT. And since a REIT would generate more stable earnings and cash flow than Macy's, it could attain a higher valuation.

Macy's ultimately may split its retail operations from its real estate in order to capture these tax and valuation benefits. However, the 70% stock upside that Starboard's Jeff Smith touted last month seems like a stretch. The real value of Macy's real estate is as a parachute to ensure a smooth landing for investors if its retail business eventually falters.