Dominant Chinese search engine Baidu (NASDAQ:BIDU) is no stranger to volatility. After hitting an all-time peak of around $252 late last year, the company has severely underperformed the market in 2015, down 28% year to date. There are a couple of prominent reasons the stock has been lagging lately, but overall I think the current share weakness presents a very compelling entry point. This is why I've decided to take a Foolish options position on Baidu.

Why it's down
Shares had been trending lower throughout the first half of the year, after two earnings reports that failed to impress investors, but the second-quarter earnings report was the real kicker that crushed Baidu last month.

While total revenue jumped 38% to $2.7 billion, investors were overly concerned about the company's heavy investments in online-to-offline, or O2O, services: things like ordering food for takeout or buying movie tickets online. That spending is largely why operating income and net income were down modestly year over year, despite the healthy jump in sales. Naturally, there will be risks with expanding into the O2O market, and those investments could fail to pay off, but CEO Robin Li is very confident that O2O could represent Baidu's next stage of growth, even as the core search business remains robust.

On the conference call, Li pointed out that local commerce in China remains highly fragmented, online penetration of O2O remains in the single digits, and the opportunity could expand Baidu's addressable market by tenfold. Li summed up why Baidu has such a good chance of succeeding:

We are optimistic on the outlook of O2O, and Baidu has all the key pieces in place to win: Indispensable foundational products, like Baidu Maps and Mobile Baidu, the strength of Baidu's brand, our enormous traffic resources, powerful data-driven technologies like recommendation and logistics optimization, a large and well-trained sales force, and perhaps most importantly, the vision and unshakeable commitment to see it through.

There was, of course, also the news of the yuan devaluation, which hurt a wide range of multinationals and Chinese companies. While the devaluation's implications aren't specific to Baidu, the concern is that China's macroeconomic conditions are weaker than expected.

Even amid macro uncertainty, I have confidence that Baidu will continue to execute well on the micro level and that its long-term potential is intact.

The trade
Generally, I'm a big fan of synthetic options positions, although I like to modify them for a couple of reasons. The position that I plan on opening may not technically qualify as a synthetic, but it's strategically similar.

I plan on selling a vertical put spread for December 2015 expiration while simultaneously buying a LEAP call for January 2017 expiration. Here are the current prices and some of the relevant Greeks that I'm looking at.

By the time I execute this trade, these figures may differ slightly, but you get the picture.

Using this example, my net credit for the put spread is about $1.80, and since I'm selling two spreads I'll bring in $3.60. That's enough to cover over 10% of the cost of the call, bringing my overall net debit to around $27.50. This would make my breakeven for the trade $187.50 (the $160 strike plus the net debit) by January 2017. I'm fairly confident that Baidu will be able to recover by then, making the position profitable.

The reason that I'm selling a nearer-term put spread is because time decay accelerates closer to expiration, hence the larger negative theta. Meanwhile, the LEAP will decay at a slower rate (the smaller negative theta). The overall theta for these three legs is -0.009, which means I'm close to time neutral.

I also don't believe that Baidu will decline to $140 or less, which is why I chose those strikes. Baidu hasn't traded that low since April 2014, and if shares were to retrace that far Baidu would be trading at "just" 23.5 times earnings. In the context of Baidu's historical valuation and future growth opportunities, that's actually fairly cheap. 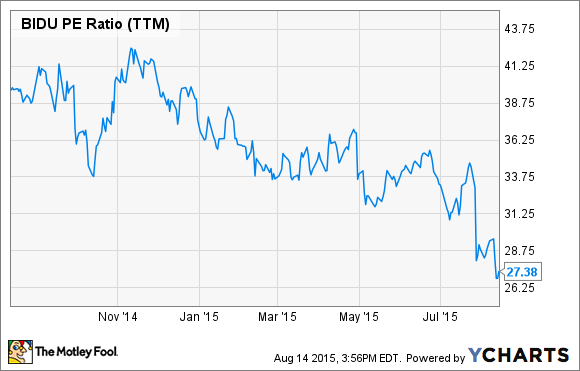 Ideally, the December put spread will expire worthless in a matter of months. If that happens, then I would consider selling yet another put spread depending on where shares are trading, with the goal being to bring my net cost down even further. If I can recoup 10% of my initial cost each quarter, it will reduce my capital outlay and risk. As soon as the Fool's trading policy allows, I'm putting this trade on.