Please ensure Javascript is enabled for purposes of website accessibility
Free Article Join Over 1 Million Premium Members And Get More In-Depth Stock Guidance and Research
By Ted Cooper - Aug 17, 2015 at 9:53AM

Investors who only look at Royal Caribbean's income statement may be too optimistic about the stock's future.

Royal Caribbean ( RCL -3.08% ) has emerged as a stock market darling, rising roughly 60% since mid-October. It also was named one of Barron's top picks for 2015. Barron's argued that paying 24 times earnings was not too much because it predicted earnings per share would double in three years.

However, investors who only look at Royal Caribbean's income statement may be too optimistic about the stock's future. A look at the company's cash flow statement provides a more sober approximation of its earning power. The company's free cash flow is significantly lower than reported earnings, potentially causing investors who rely on Royal Caribbean's price-to-earnings ratio to overvalue the stock.

Although industry leader Carnival Cruises ( CCL -3.86% ) trades at 28 times earnings, Royal Caribbean's 24 price-to-earnings ratio is already high, and is even higher if you substitute free cash flow for earnings. If the market loses faith in Royal Caribbean's ability to grow into its lofty valuation, the company's stock price could come crashing down.

Overstated earnings
Royal Caribbean's and Carnival Cruises' stock prices have both experienced appreciable gains since oil prices collapsed late last year. Fuel costs are an important determinant of profitability in the cruise industry. Last year, Royal Caribbean spent 11.7% of revenue on fuel and generated an 11.7% operating margin. Even a small reduction in fuel costs has a meaningful impact on earnings. Thus, the market responded favorably to this development.

However, a closer look at Royal Caribbean's earnings might make you think twice before paying a high multiple. The cruise industry is capital-intensive. Cruise operators make massive cash outlays to build new ships to maintain market share. The cost of those ships is deducted from earnings over time via depreciation, but the company makes a large cash payment up front.

For example, when the company took delivery of the massive Quantum of the Seas last October, it began charging off the ship's $935 million cost as depreciation expense on the income statement. Royal Caribbean has already paid nearly $150 million for the ship -- it borrowed the rest -- but the company's operating income will be affected by just $26 million per year for the next 30 years until 85% of the ship's cost is expensed. 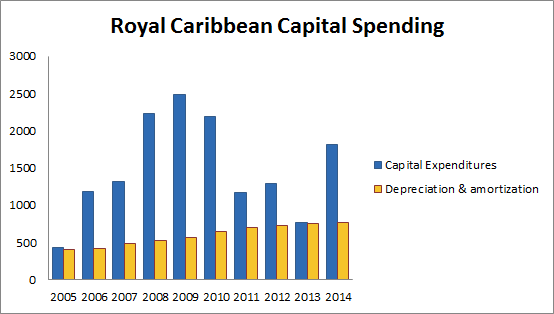 In theory, Royal Caribbean could stop building new ships and simply maintain its existing fleet while reaping large free cash flows. In reality, this is unlikely to ever happen. If Royal Caribbean were to stop growing its fleet, Carnival Cruises would likely continue expanding its own capacity with larger and more efficient ships, eventually allowing Carnival to undercut Royal Caribbean on price.

That may be why Royal Caribbean CEO Richard Fain pledged to continue newbuilds to maintain market share. The company will introduce two almost-billion-dollar ships in 2016 -- Ovation of the Seas and Harmony of the Seas  -- both heralded as larger and more efficient than earlier classes of cruise ships. Carnival is adding the same, with an $800 million ship of its own set for a 2016 debut.

This creates a vicious cycle where Royal Caribbean must continue spending to maintain profitability, but the large capital outlays only help it tread water as returns on capital are forever held in check by price competition. As a result, Royal Caribbean's reported earnings likely overstate the cash that can actually be distributed to shareholders.

Show me the money
Royal Caribbean's dividend history shows the limits on how much capital can be returned to shareholders. From 2005 through 2014, the company paid $952 billion in dividends and reported $5.1 billion in net income. It also repurchased $585 million of its shares. Meanwhile, it spent over $14.8 billion to maintain and grow its fleet -- nearly three times as much as it reported in earnings. With such an enormous capital spending program, it will be difficult to grow its measly 1.3% dividend yield.

The current dividend would be a trivial concern if Royal Caribbean could eventually turn reported earnings into cash flow, but continued high spending on ships makes that unlikely. Even if it cuts capital spending by two-thirds, capital expenditures would still consume all of the company's net income. Moreover, the debt added to finance newbuilds makes it more difficult to raise the dividend in the future since debt increases interest expense. This makes it unlikely that Royal Caribbean will be able to distribute significant capital to shareholders any time soon.

The market appears to be placing too much emphasis on near-term earnings growth and not enough on long-term capital return potential. Royal Caribbean's 24 price-to-earnings ratio accounts for expected earnings growth over the next few years, but ignores the company's struggle to produce positive cash flow. Until Royal Caribbean shows it can produce meaningful free cash flow, investors would be wise to leave this stock to momentum traders.