What: Shares of Avalanche Biotechnologies (NASDAQ:ADVM) a clinical-stage gene-therapy company focused on developing treatments for diseases of the eye, move higher by about 10% today after the stock received an analyst upgrade.

So what: The strong upward move today is attributable to Chardan Capital Markets, which rated the shares a buy and set a price target of $17.50, which is well ahead of the $10.99 that shares closed at today. Investors were probably relieved to hear a bullish note about the company after such a difficult year and bid the shares up accordingly.

Now what: Shares of this once promising company have been in freefall since the start of the year, with the one-two punch of a CEO resignation followed by pulling the plug on a second phase 2 clinical trial for its lead product candidate AVA-101. The product candidate was being researched as a treatment for wet age-related macular degeneration, and the company's decision to not move forward with phase 2b trials has put tremendous selling pressure on the stock. 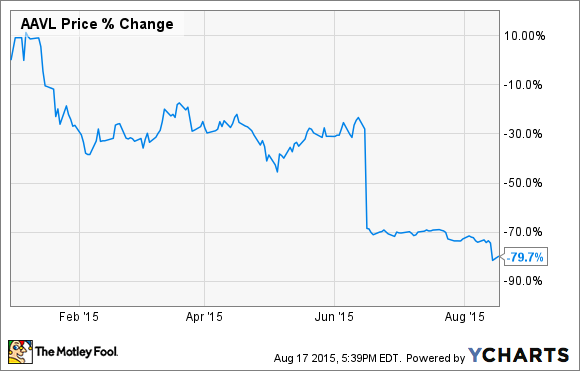 While these setbacks have been a huge blow to the company, long-term bulls should be a little relieved to know that the company has $279.6 million in cash on its balance sheet, which is about equal to the current market cap of the entire company. This means the market is currently assigning nearly zero market value to the company's entire pipeline, which it should be noted does include four other product candidates beyond AVA-101.

Avalanche is far too speculative for my investing taste, but with so much cash on the balance sheet it's at least good to see that this company won't be needing to tap the markets for fresh capital for a long time. Still, until this company gets its leadership situation straightened out, it's hard for me to feel bullish on the stock.