Motley Fool contributors explain why these five stocks will reward shareholders for decades to come.

Reliable dividend stocks are a rewarding way to unlock income from your investments, and dividend-paying stocks have historically outperformed non-dividend stocks over time. With this in mind, we've put together a list of five winning dividend stocks that promise to reward investors for the next 25 years. In the article below, Motley Fool contributors explain why Starbucks (SBUX -0.76%), PepsiCo (PEP -0.93%), Mastercard (MA 0.23%), Disney (DIS 3.49%), and Procter & Gamble (PG -0.71%) are winners through-and-through.

Tamara Walsh (Starbucks): Not only does Starbucks boast a reliable dividend of $0.64 per share, but it is also growing its business and dividend at a breakneck pace these days. It's worth owning for the next 25 years because it offers investors both income and growth -- a winning combination. Sure, the coffee retailer's dividend yield is a modest 1.12% today, but with a payout ratio of 26% and a history of delivering record quarterly earnings, investors can rest easy knowing their dividends will not only get paid, but will also grow over time.

In its recent third quarter, Starbucks generated record revenue of $4.9 billion and posted a 21% spike in profit to $0.41 per share in the period. Starbucks' tremendous ability to generate loads of cash should help the java giant continue to reward shareholders for many more years to come. On top of this, the company's board of directors said it plans to repurchase an additional 50 million shares of Starbucks stock as part of its existing share repurchase plan.

For those keeping score at home, Starbucks has repurchased $7.4 billion since 2001. This is yet another way that the coffee retailer is creating shareholder value today.

Nevertheless, if you plan to own a stock for the next 25-years you need to know that the business will continue to grow. This is where Starbucks really shines. The company is growing its business today through mobile and digital technology, including its game-changing Mobile Order & Pay, while also growing its business in key markets overseas such as China. Ultimately, this is a long-term bet that you can almost be certain will pay off down the road.

Bob Ciura: (PepsiCo) Diversified food and beverage giant PepsiCo is a dividend stock I'm going to confidently hold for the next 25 years, and perhaps even longer. I have little doubt that generations from now, millions of people across the world will still be consuming PepsiCo's products each and every day. PepsiCo has a massive portfolio of strong brands, including Frito-Lay and Quaker on the food side and Pepsi and Gatorade on the beverage side.

PepsiCo's revenue is evenly split between food and beverage, which is an advantage that I believe provides the company stability. PepsiCo was urged last year to spin off its beverage business from its higher-growth food and snacks business, but resisted. I believe this was a wise move by management, because having the consolidated operations gives PepsiCo a great deal of leverage with retailers.

Last quarter, PepsiCo grew organic revenue by 5% and organic diluted EPS by 11%. The company is growing, and shares its profits with investors. PepsiCo is on track to return $8.5 billion-$9 billion to shareholders this year through stock buybacks and dividends.

Speaking of dividends, PepsiCo is about as rock-solid as they come. The stock offers a hefty 2.8% dividend. And the company has raised its dividend for 43 years in a row, a streak I fully expect to continue for decades to come.

Brian Stoffel (Mastercard)
It's probably a shock for most Americans to hear, but cash is still used for the overwhelming majority of all transactions worldwide -- 85%, according to one report. That means there's a long growth runway for entrenched players in the cashless economy.

Given this, Mastercard is staring an enormous opportunity right in the face. Though the company only offers a 0.7% dividend yield right now, I think that the stock is (1) definitely worth holding for the long-run, and (2) going to see its dividend yield increase as the years pass.

Because Mastercard already has robust payment networks set up in most developed economies, small bumps in revenue can translate into outsized gains in earnings. And the potential for future growth in both Asia and Africa is enormous.

When it comes to the dividend, growth has been the name of the game. In 2011, the company's payout was $0.06 per year. Fast-forward to today and the payout has grown tenfold, to $0.64 per year. Over the last twelve months, the company has brought in $3.65 billion in free cash flow, while using just 17% of that to pay out its dividend. If the company continues to execute, there's lots of room for the dividend to grow.

Joe Tenebruso (Disney): Companies with dominant competitive advantages can reward their shareholders for decades, and that's certainly been the case with Disney (DIS 3.49%). 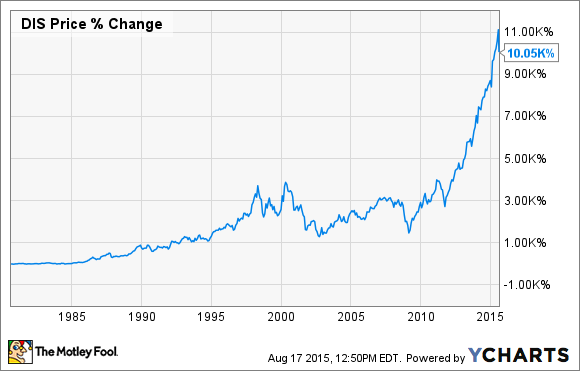 The entertainment titan's unequalled collection of timeless characters and storylines has delighted millions of people around the world for generations, and will likely continue to do so for generations to come. In fact, with powerhouse properties that now include Marvel, Pixar, and LucasFilm, Disney's stable of brands has never been stronger.

Yet what truly sets Disney apart from its rivals is its unparalleled global distribution system. Disney is able to monetize its brand assets -- to a far greater extent than any of its competitors -- through its vast system of theme parks, media networks, and powerful consumer goods licensing channels.

Moreover, these diversified revenue streams help Disney generate enormous cash flow, which the company has passed on to shareholders via a string of rising dividend payments over the last decade. And thanks to its powerful competitive advantages, it's quite possible that Disney could continue to pay out steadily increasing dividends to its shareholders over the next quarter-century and beyond.

Keith Noonan (Procter & Gamble): With a strong dividend yield, an established history of annual payout increases and share repurchases, and a strong line of brands, Procter and Gamble is a compelling long term investment option. The company's share price has dipped roughly 11% over the last six months owing to a lack of sales growth and a relatively small dividend hike, but the depreciation has pushed the company's dividend yield to roughly 3.5%, and its efforts to deliver innovations within established brands, including Crest, Tide, and Bounty have the potential to put the company back on the sales growth track.

Even if low revenue growth were to result in slow dividend growth, P&G's current yield is already attractive, and the company can tap into its roughly $8.6 billion cash and equivalents reserve if dividend payouts and share repurchases exceed cash flow.

The company's share price is up roughly 42% over the last 10 years, with total returns over the period coming in at roughly 88%. So, while history suggests the stock probably won't deliver staggering capital increases, its dividend and buyback histories show that the company is committed to returning value to shareholders, furthering the appeal of the stock as a long-term, relatively low-risk play.