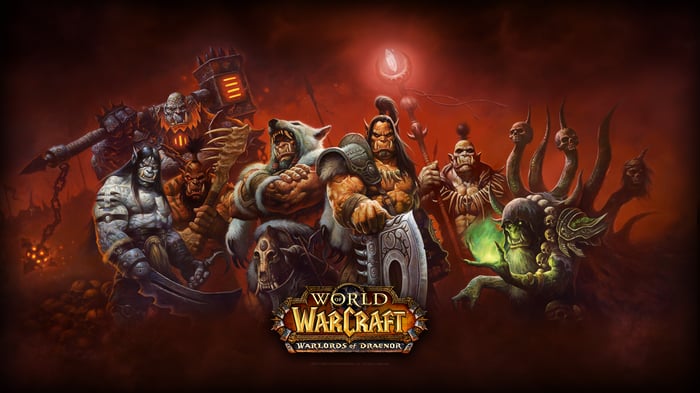 Last year's WoW expansion attracted millions of new subscribers to the game, but the bounce has proved short-lived. Source: Activision.

Activision Blizzard's (NASDAQ:ATVI) World of Warcraft game has shed half of its subscriber base over just the past six months: The player count dove from 10 million paying customers in January to less than 6 million at the end of June. Sure, WoW is still the most popular role-playing game of its kind in the world. But it now has less than half of the 12 million active gamers it counted at its peak in late 2010.

Yet it's hard to find evidence of that collapse in Activision's operating results. In fact, the business is posting near record growth. Revenue rose 15% last quarter as profit doubled. Activision entertained 25% more active players across all of its franchises last quarter, which equates to 3.5 billion hours of gameplay over the past three months. The publisher just raised its full-year sales and profit forecasts as the stock hit a new all-time high.

Life without World of Warcraft
Here's the most impressive thing about those second-quarter results: They include a 29% increase in sales on the Blizzard side of Activision's business. In short, Activision had no trouble navigating a huge drop in the player base of one of its tentpole franchises.

Destiny is one of the five new major franchises ATVI plans to have in place by the end of 2015. Source: Activision.

That's incredible when you consider that as recently as 2011 the World of Warcraft franchise was worth a whopping 90% of Blizzard's sales. The reliance on that game along with the publisher's other two hits, Call of Duty and Skylanders, was so big that it created what Activision's management described as one of the biggest risks for investors.

"We depend on a relatively small number of franchises for a significant portion of our revenues and profits," executives warned shareholders in the 2011 annual report. We can put an actual dollar figure on that dependence: Call of Duty, World of Warcraft, and Skylanders accounted for two-thirds of Activision's sales in 2014 and an even higher proportion of profits.

But last quarter marked an important turning point on that score. Warcraft wasn't responsible for anything close to 90% of Blizzard's revenue. It didn't even account for the majority of sales. For the first time, that honor went to a batch of different titles: Diablo and two new brands, Hearthstone and Heroes of the Storm. "The franchise diversification inside Blizzard is happening rapidly," Chief Financial Officer Dennis Durkin explained in the company's recent quarterly conference call.

Developing a deeper portfolio
Activision is on track to double the number of major franchises in its overall portfolio to 10 by the end of this year. Guitar Hero and Overwatch each have a shot at joining Hearthstone and Destiny as important new contributors to the publisher's results.

The company hasn't given up on World of Warcraft. Activision just released one of its biggest non-expansion updates to the game in June. Management said the fresh content succeeded in helping stabilize subscriber losses toward the end of the second quarter. Meanwhile, Activision last week unveiled details on its sixth big expansion to the title, called Legion, that includes feature upgrades such as a new hero class and weapon system.

That expansion should boost subscriber numbers, at least for a short time. But the deeper portfolio of franchises makes a Warcraft spike much less critical to Activision's future. Investors can expect to see dozens of launches and expansions across key franchises, including Diablo, Heroes of the Storm, Hearthstone, and StarCraft, over the next few quarters. And they have less reason to worry that weak results out of any single game will sink Activision's business results.