What if I told you that the cable guys have been sitting on a way to defeat the Netflix (NASDAQ:NFLX) army of cord-cutters since forever? That this secret weapon could instantly reverse the outflow of TV service customers from AT&T (NYSE:T) subsidiary DirecTV or Comcast (NASDAQ:CMCSA) in a heartbeat?

...and that the cable and satellite companies have a perfectly legit reason not to pull the trigger?

Read on for the dirty details. It's all very simple, yet extremely frustrating for both consumers and broadcasters.

So-called video on demand, or VOD, services have been a popping up inside the cable and satellite TV packages since the late 1990s. When true broadband networking became popular, those VOD features also started to make sense. Even if you only subscribe to your cable company's TV services with no broadband whatsoever, your cable box can still extract on-demand video data like a champion.

It's so seductively simple:

In many ways, that's exactly how we consume Netflix or Hulu today. Very similar on-demand streams have been part of your standard cable TV subscription for ages. Satellite providers like DirecTV need a separate broadband service plugged into the cable box, but it's all seamless and easy for the subscriber either way. 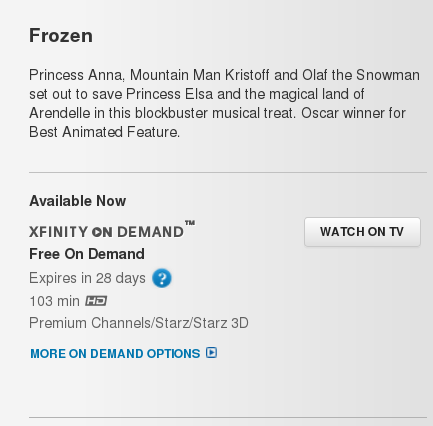 Yep, you can watch Frozen through Comcast's on-demand system -- if you're willing to dig it up in a cumbersome menu system. Source: Comcast Xfinity.

This way, you can watch the next episode of your favorite TV show without setting up the DVR to record it first. As a subscriber to premium TV channels such as HBO or Starz(NASDAQ:STRZA), you can pick and choose among this month's content collection rather than waiting for the live TV schedule to deliver the goods.

If done correctly, VOD services can clone the Netflix model to perfection. But wait -- there's more! Given the long-standing, cozy relationships between content producers and their favorite broadcast partners, someone like Comcast or AT&T/DirecTV could very well extract more attractive terms and fees for this service than Netflix can.

Let's say Comcast decides to go all-in on VOD offerings. First, the cable giant would pull every string at its disposal to set up the proper back-channel licensing contracts. Then, the revamped on-demand service would get a national marketing push of epic proportions, complete with marching bands on Times Square and 30 minutes of Super Bowl ad space. The Most Interesting Man In the World would be on board, next to that Old Spice guy.

Consumers would be showered in both eyeball-grabbing attention magnets and solid selling points. "This is what we have, here's how easy it is to use it, and look at that dancing platypus!"

That's where Netflix shares drop through the basement floor as customers flee the service in favor of better and brighter VOD vistas.

Where's the kill shot, then?
Scary, right? I mean, all of this sounds awesome from a consumer's point of view, but Netflix investors are reaching for the nearest self-defibrillator right now. Yes, even the young 'uns.

So, let me tell you why neither DirecTV nor Comcast have pulled this game-changing trick yet -- and why they won't for many years to come.

You see, going through with this plan would be tantamount to killing the old cable/satellite broadcasting model. You know, the one that helped Comcast double its annual revenue and almost triple earnings per share during the last five years. The one that lifted Comcast shares 240% higher across the same period.

If you want to understand business practices in the real world, just follow the money. And there's a ton of that supporting the current cable model. None of the players involved in that lucrative game are terribly interested in hitting the reset button and starting over with a relatively unproven business model.

Imagine the storm of shareholder protests DirecTV or Comcast would endure the moment they announced this (hypothetical) radical strategy shift:

Hey guys, we're about to throw this cash machine out with the bathwater, because we want to take video on demand seriously. Sure, the studio licenses cost an arm and a leg as risky new ideas are replacing time-honored and battle-tested concepts. And who knows if we can actually make consumers think of the cable box as just another Netflix-like click-and-watch service? But we think it may be worth the risk, and... come on, stop it with the rotten tomatoes and shareholder lawsuits already!

You know what I'm saying?
This strategy shift is probably inevitable in the end, but it's also too big of a market makeover to be accepted quietly at this point. If and when the cable guys come around to this point of view, it will be because Netflix and similar services already paved the way into treating on-demand video as a standard content consumption model. That road may be paved with gold and all, but it'll also be under new ownership. And by the time the current incumbents take that desperate plunge, it might already be too late to win those lost consumers back.

Netflix investors must indeed keep an eye on how cable companies develop and promote their on-demand services. But today, there's very little marketing going on, and some cable systems still ask you to dive through several levels of clumsy menu systems before reaching their limited and diluted on-demand offerings -- only to suffer through advertising and pay-per-view tactics as well.

It's the inescapable revolution that never comes. Call back in five years, or maybe another decade.