It's possible that to be the head of investor relations at ExxonMobil (NYSE:XOM), you have to go through the CIA's interrogation training so you don't specifically answer anyone's questions during its conference calls. It's almost comical to listen to analysts ask specific questions, only to get deflected with broad-stroke comments. Ultimately, ExxonMobil's conference calls boil down to two things: "We are always looking to control costs," and "We have a long-term vision for this company."

Every once in a while, though, a couple nuggets of information make listening in on these conference calls worth it. Here are five things that really stood out as key elements related to ExxonMobil's future. All comments are from Exxon's vice president of investor relations, Jeff Woodbury.

1. We're getting pretty good at producing shale development
A major critique of ExxonMobil and its other large integrated peers was that they were unable to achieve the cost efficiencies some of the independent oil and gas producers were in U.S. shale drilling. It looks as though that's starting to become a myth, because this company has been able significantly lower its capital costs. Says Woodbury:

We also demonstrate the capability to respond quickly in a rapidly changing environment and, to date, have captured incremental savings of about 30% in drilling completion costs from the peak in 2014. These savings include market benefits as well as ongoing structural cost efficiencies and productivity improvements across our operations.

This is one thing that really sets ExxonMobil apart from its peers. The other integrated majors that reported this past quarter showed that they all took significant losses on their U.S. operations, whereas ExxonMobil's operations took only a $47 million loss for the quarter. One thing that's also working heavily in ExxonMobil's favor is that is has some large legacy acreages in places such as the Permian Basin, which gives it a significant cost advantage in exploration and development costs since it doesn't need to pay royalty fees and other elements involved in acquiring acreage today. 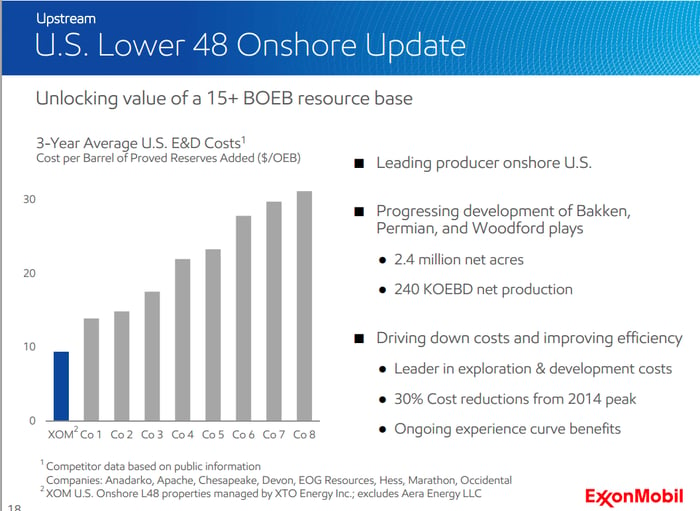 2. Our shale production plan is more than just "go, go, go"
As you might expect, ExxonMobil has taken a much more measured approach to the growth of its shale acreage than what we've seen from other companies. It's able to do so, though, because it has the financial flexibility that so few other companies have. Longer term, ExxonMobil sees the development of its shale acreage as a two-step process. From Woodbury:

Longer term, gas investment is paced with anticipated demand growth, whereas near-term emphasis is on the development of 2.4 million net acres in the liquids-rich Bakken, Permian, and Woodford Ardmore/Marietta, where investment opportunities remain attractive in today's price environment.

This statement hints at the idea that the U.S. natural gas market is at its upper limit in terms of supply and demand. However, once some of the major chemical manufacturing and LNG export facilities come online in the Gulf Coast region, there will be an uptick in demand. In the meantime, it still sees plenty of opportunity in developing its tight oil acreage positions in the Permian Basin and Bakken formation, even in today's market.

Rig rates are down across the board, both land and floater. On floater, the day rates and mobilization costs are down anywhere from 25% to 40%. And so we're well positioned to capture that both on the cost as well as the capital side.

While he wanted to be conservative in his estimate, since putting a precise number on the amount saved across a $34 billion capital investment plan is a little tough, Woodbury estimated that the company has realized 9% long-term structural cost savings across its entire portfolio.

4. We're realizing other benefits from the U.S. shale boom
Another misconception is that by not producing gobs of oil and gas from American shale plays, companies such as ExxonMobil aren't realizing the full potential of this newer opportunity. One thing management wants to remind you, though, is that it can realize other benefits from shale. For example, according to Woodbury:

Our Mid-Continent and Gulf Coast refiners have increased processing of advantaged North American crudes. Currently, about 45% of the slate was North America in 2011, and currently, we're at about 70% in 2014.

Today, the lower cost of crude oil from the U.S., not to mention oil sands from Canada, has been immensely lucrative for U.S.-based refineries. So ExxonMobil has been retooling its refineries to handle these kinds of crude instead of other imported sources.

5. The market is down, but we see immense opportunity here
All around, exploration and production companies have been cutting their capital-expenditure budgets to conserve cash. This past quarter alone we saw many of ExxonMobil's peers announce even deeper cuts to their 2015 budgets than before. ExxonMobil doesn't see this price crash as a long-term existential threat to what it does, and so the company is keeping the "steady as she goes" mantra when it comes to maintaining capital investment through the down cycle in the market. Woodbury:

And when we have a down-cycle like we're seeing right now, we further are well positioned to quickly lead that cost curve in capturing market savings. Now on top of that, we've got that financial flexibility to invest through the cycle, and that does very much very well position us to capture those market savings in the down-cycle.

While it may sting a little now, as prices are really cheap and profitability is a bit lower, maintaining development spending will ensure that the company has plenty of irons in the fire several years from now to grow production. If you're willing to wait for the payoff, this is something that should be encouraging to long-term investors in ExxonMobil.

What a Fool believes
The steadfast consistency of ExxonMobil's management team is probably the only thing that resembles calm in today's oil market, and for long-term investors that should offer a certain amount of comfort. The company is perpetually looking to keep its costs low while investing in the future no matter what the short-term outlook is today. Without any certainty as to where oil and gas prices will be in the near term future, this is the best way to look at investing in the oil and gas space.