Last summer I returned to Walt Disney's (NYSE:DIS) Disney World theme parks in Orlando, Florida for the first time in around 15 years. This followed a visit to Comcast's (NASDAQ:CMCSA) Universal Studios the year before.

At the Disney Parks I was stunned by how little had changed from my previous visit. Yes, the technology had improved and FastPass+ noticeably made visiting each park more enjoyable, but three parks I visited -- Epcot Center, Disney Hollywood Studios, and Animal Kingdom -- seemed mostly the same and a little dated.

It's not that there were no new rides. Epcot had Soarin', Test Track, and Mission: Space, which were all new since my last visit. Hollywood Studios added the enjoyable Toy Story Mania! and Animal Kingdom had expanded since my last trip there, which was fairly close to its 1998 opening.

Still many parts of Epcot and Hollywood Studios were very dated and both parks had noticeably fewer top-tier rides in line with the best ones at Universal. Most importantly neither park had anything approaching the immersive experience offered by Universal's Wizarding World of Harry Potter land.

The problem was most noticeable at DHS, which seemed to lack focus now that it's no longer billed (or functioning) as a working movie studio. That park still had some great rides, but while its movie-driven theme is similar to the one at Universal the park, even more than Epcot seemed ready for a refresh.

Disney clearly agrees and has announced major changes to Hollywood Studios including a 14-acre new land devoted to Star Wars that will also be added to Disneyland in California.

What is Disney doing?
The dual Star Wars lands will be the company's largest single-theme expansions ever. It's not just building a new ride or a ride and show, it's creating immersive new sections of DHS and Disneyland that will be worlds unto themselves -- in the same fashion as Universal's Florida and Hollywood Potter lands.

Each Star Wars land will feature multiple new rides, shows, shops, and other features that immerse visitors in the experience. Disney CEO Robert Iger explained the concept in a blog post.

"These new lands at Disneyland and Walt Disney World will transport guests to a whole new Star Wars planet, including an epic Star Wars adventure that puts you in the middle of a climactic battle between the First Order and the Resistance," he said.

The land will also feature a ride where people get a chance to take control of the Millennium Falcon and an expansion of the existing Star Tours and Jedi Academy attractions. 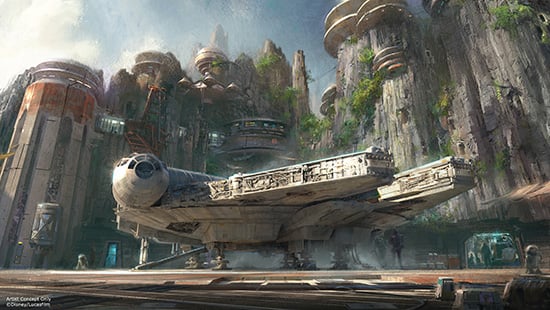 It's not impossible. I used to bullseye womp rats in my T-16 back home, they're not much bigger than two meters. Source: Disney

Why is Disney doing this?
For many years Universal was a bit of a lazy competitor and Disney was able to coast on its reputation. The addition of Wizarding World however has made Universal a bigger player since the Potter universe appeals to kids of all ages and their parents in a way that few stories do. The addition and later expansion of the Potter attraction has been a boon for the company, which Comcast specifically cited in its most recent earnings release as the reason its theme parks posted improved results.

Potter has been a big draw for Universal, which has to be a concern for Disney which saw 4% growth for its theme park business during its just-completed third quarter.

Use the Force, Disney
Harry Potter and Star Wars are very rare properties -- enduring universes enjoyed by the whole family. It's very likely that Wizarding World was the deciding factor in some people's decisions to go to Universal parks over Disney parks or at least devote less time to Disney properties.

Launching two Star Wars lands in its east and west coast parks gives Disney a clear answer to Wizarding World. The fan bases may not be the same, but they're similar in the fact that father and son, mother and daughter, maybe even grandma and grandpa could all be fans. The amazing thing here is not that Disney is doing this, but that it waited so long.