The past two weeks saw a reversal of fortune for Apple (NASDAQ:AAPL) shares.

Clichéd headlines aside, Apple will need to dispel doubts that its iPhone supercycle could lose momentum to keep investors' confidence intact. So, as focus shifts from its recent earnings report to its current fiscal quarter, how should investors set their expectations for iPhone sales in Apple's fiscal year fourth quarter? After handily outperforming the market over in the first half of 2015, the Mac maker's shares stumbled lately, leading to a humorous, if-not-technically correct surge in "Apple Bear Market Territory"  stories from some media outlets.

One bank's take
Barring an improbably bad quarter, Apple will again set fresh records for virtually every meaningful financial metric in its current fiscal year, a trend fueled primarily by the tremendous success of iPhone 6 and 6 Plus. However, as we saw from Apple's recent record-setting report, a historically strong quarter can still trigger a sell-off in its shares should iPhone shipments register below consensus estimates.

So what should that consensus be, you ask?

In a recent note to clients, UBS veteran Apple analyst Steve Milunovich raised his estimate of iPhone sales from 46 million to 49 million in Apple's current quarter, citing the firm's proprietary Evidence Lab iPhone Monitor, which tracks search volume surrounding a set of iPhone-related keywords as a way of inferring future demand. The backtesting evidence presented in UBS' note indeed appears compelling, but it's by no means a given or the only way to frame our thinking about current-quarter iPhone sales.

What does history say?
As you can see, Apple's fiscal fourth quarter typically produces the second-lowest level of iPhone sales in Apple's fiscal year. 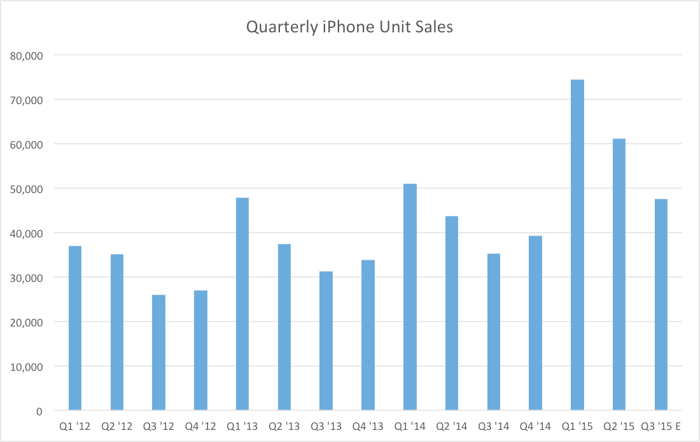 Taking this one step further, looking at the historical Q3 to Q4 increase as a means of also possibly gleaning some kind of insight into this historical pattern for iPhones sales. Here's what the data show:

Taking the average of the past three years of iPhone data suggests Apple will sell over 51 million iPhones this quarter. This estimate sounded initially aggressive to me, but upon further reflection, 51 million iPhone sales seem plausible for three primary reasons.

First, selling 51 million would represent an actual slowing of iPhone's sales growth, keeping the historical trend mentioned above of Q4 producing the second-lowest level of iPhone sales. See for yourself.

Second, per the UBS estimates, the bank believes that a whopping 73% of Apple's overall iPhone installed base has yet to upgrade to the latest iPhone . Undoubtedly, not every iPhone owner will upgrade with every new iPhone, or even with every new iPhone form factor, but this still implies that plenty of potential buyers exist for Apple's iPhones. And lastly, Apple should, barring a departure from its past iPhone launch windows, begin selling its next version of the iPhone at the tail end of Apple's current quarter. So considering these three drivers, it certainly seems reasonable that Apple could in fact surpass 51 million iPhone sales in the coming quarter.

Don't lose your head
Lost in the discussion, and eminently more impactful for those investing to fund their retirement, is what this isolated discussion implies for Apple's long-term outlook. The answer is: very little. However, a few relevant points do bear mentioning.

Importantly, the disproportionate focus on iPhone sales reflects the fact that the iPhone drives the bulk of Apple's financial performance today. Sales tailwinds in other categories like the Mac, Apple Watch, and possible other new products like an over-the-top TV service should help to diversify Apple's revenue mix in coming years. However, in the short term, the market's myopic focus on iPhone shipments makes sense to a certain extent.

As I mentioned in the opening, Apple's results will almost assuredly break records by nearly every measurable metric. So should iPhone sales come in short of estimates, it could also again create an attractive entry point into one of technology's most dominant companies.