It's not too often that a company can grow at a 20%-30% annual rate and still have a cheap valuation. Many times, companies with exceptional growth will command price-to-earnings ratios in the hundreds simply because they're growing so rapidly.

This is not the case with First Citizens Bancshares (NASDAQ:FCNCA)and Investors Bancorp (NASDAQ:ISBC) two regional banks with industry-leading growth rates and dirt-cheap valuations. Is this an example of Mr. Market getting it wrong, or is there something else to the story?

Breaking down the numbers
One thing we can say for certain: Both First Citizens and Investors Bancorp are growing like weeds.

On a trailing-12-month basis, First Citizens saw its revenue grow 29%. Investors Bancorp grew 17% by the same measure. These numbers compare with an average growth rate of just 5% for a group of 60 comparable regional banks over the same period.

Exceptional growth and dirt cheap prices. It almost seems too good to be true, right?

Why so cheap?
The root of the problem for both banks is weak earnings, but the details as to why vary.

First Citizens reported a return on equity of 6.4% and return on assets of 0.58% in the second quarter. Its dividend currently yields a paltry 0.5%.

Growth at First Citizens since the financial crisis has been opportunistic and aggressive, driven by acquisitions of failed banks all over the country. It has expanded out of its North Carolina base and into South Carolina, Florida, and several western states.

This aggressive strategy can be very effective -- BB&T is a great example of another North Carolina bank that has gained prominence with the same strategy -- but it can also be risky.

Sticking with North Carolina banks, Bank of America's aggressive growth under former CEO Ken Lewis is a fine example of how it can backfire. B of A's acquisition of Countrywide Financial nearly bankrupted the entire enterprise.

Thus far, First Citizens' aggressive growth strategy has not translated into shareholder value. Until the bank's growth translates into higher returns on assets and equity, the stock will most likely continue to struggle. 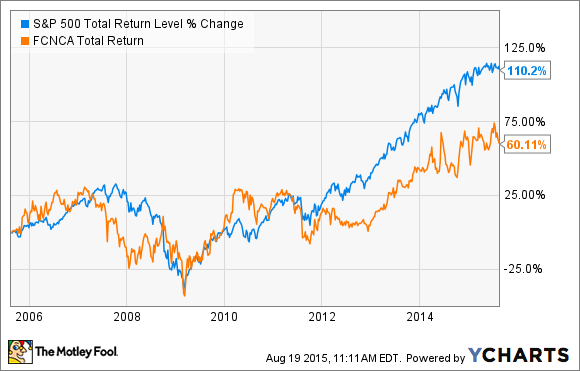 The company raised new funds in an offering in 2014, bloating its balance sheet with excess capital. The new money is to be used to transition the bank from a consumer bank to a commercial bank and will support new growth opportunities and pay for the one-time expenses associated with the transition (such as an upgrade of the bank's back office core technology, for example).

The combination of low ROE and ROA, along with the uncertainty of this kind of a major strategic shift, are the most likely culprits holding Investors Bancorp's stock back. Fortunately for investors, those problems should all dissipate over time as the company moves forward with the evolution.

Its impressive growth rate is a fantastic indicator to me that the company's new strategy is working. The marketplace has proved itself receptive to Investors Bancorp as not only a community bank, but now as a commercial bank as well.

Fast-growing banks present a unique set of challenges
Growth at banks is important, yes, but it is a different animal from growth in other industries. When banks grow, they must maintain credit quality. They must build capital along with their new assets and liabilities. And as these examples illustrate, the growth must deliver results to the bottom line.

In these cases, growth is obviously strong. What's missing is the translation to returns. It's not a permanent problem, but it is a serious one. Shareholders would probably appreciate a little slower growth, and a little more focus on delivering earnings. Until that happens, I think both of these stocks will remain cheap.