What does this book have to do with Intuitive Surgical? Photo: Sam Bebee, via Flickr

For those who haven't read it, Nassim Taleb's Antifragile is a must-read. The book describes how anything in life can fit into one of three categories: fragile (will break amid chaos), robust (will stay the same amid chaos), and anti-fragile (will actually strengthen amid chaos).

Taleb may have earned his fame based on correctly calling out the fragility of banks prior to the Great Recession -- in his The Black Swan -- but Antifragile may be his true masterpiece. Once I was done reading it, I set out to evaluate my own stock holdings to see how fragile, robust, or anti-fragile they are.

Intuitive Surgical (NASDAQ:ISRG), maker of the daVinci robotic surgical system, has presented a clear case I'd like to share with readers. Currently, Intuitive shares account for 5% of my family's real-life holdings. After reading the book, I will be reducing that allocation. Here's why...

You can be forgiven if this is a new word to you. I'd never heard of it before reading Taleb's book. He defines iatrogenics as, "harm done by the healer, as when the doctor's interventions do more harm than good ."

I can't capture all Taleb has to offer on the matter. Suffice it to say that he believes medical interventionism should be avoided at all costs unless it is a life-or-death situation. That's largely because there are often unseen, long-term risks associated with non-life-threatening interventions.

Without a doubt, this is one of the most controversial of Taleb's ideas.

For a particularly egregious example of iatrogenics, consider how it was once considered normal to give children cocaine for toothaches.

In Intuitive Surgical's case, thinking of iatrogenics as a long-term risk for shareholders was an entirely new concept for me. Because the daVinci doesn't go through decades-long testing prior to approval, it isn't possible to accurately evaluate long-term consequences of using the machine.

And in fact, reports have already started pointing out instances of iatrogenics with the machine. A 2013 analysis showed that complication rates were actually higher in hysterectomy operations when the daVinci was used as opposed to traditional surgery.

But iatrogenics isn't just a risk for the daVinci, but surgery in general. Some are beginning to question whether or not the number of operations performed in the United States -- whether from the daVinci or traditional methods -- is really necessary or helpful.

In 2012, the U.S. Preventative Services Task Force recommended, "against PSA [Prostate Specific Antigen] screening, as well as suggest[ing] changes in treatment pattern for low risk prostate cancer away from definitive treatment ." In other words, the agency saw more risk than benefit (both health-wise and financially) from intervention -- classic iatrogenics. The number of prostate operations performed using the daVinci fell significantly following this recommendation.

If only management had more skin in the game
Taleb warns that no one knows about the hidden risks of something -- like iatrogenics -- better than those who have designed it.

Given that, he thinks that, "every opinion maker needs to have 'skin in the game' in the event of harm caused by...his information. Anyone producing a forecast...needs to have something to lose from it."

This relates directly to the way that publicly-owned companies like Intuitive are run. Since it is impossible for anyone to know all of the risks in a business better than those who actually run it, individual shareholders should look for management that is heavily invested in its own company. That way, they are in the same boat that you are -- with exposure to poor results.

At Intuitive Surgical, it seems like management doesn't have a whole lot of skin in the game.

While Lonnie Smith, the Chairman of Intuitive's board and a former CEO of the company, holds a rather significant amount of Intuitive shares, he isn't involved in the day-to-day operations of the company. As a whole, less than one-fifth of one percent of the company is owned by C-level executives.

Even worse, Dr. Myriam Curet, Intuitive's Chief Medical Officer, and Colin Morales, the company's senior vice president for manufacturing and service operations, own just 21 and 54 shares of the company, respectively.

With iatrogenics surfacing -- for myself -- as a new risk to think about, I want to see management that is exposed to the long-term consequences of the medical community deeming such intervention unnecessary. With the company's chief medical officer owning just a bit more than myself, I am not reassured.

Why I'm not selling it all
One of the central tenets of Antifragile has to do with the advantages of convex optionality. Taleb sums this idea up by saying:

"When [something] has more upside than downside in a certain situation, [it]...tends to gain from...errors...[and] time."

The Motley Fool's own David Gardner has his own word for the same concept: multiple futures. While Intuitive Surgical might not have the type of optionality that could make it a force in multiple industries -- think Tesla branching into energy, or Amazon and cloud computing -- it does have multiple futures when it comes to the type of operations its machine can be used in.

After being trained on the machine, doctors begin experimenting to see what new procedures might benefit from the daVinci (pictured below). This is the basis of anti-fragile optionality: overtime, use of the daVinci benefits from tinkering -- and the upside potential (revolutionizing the global market for certain procedures) is enormous. 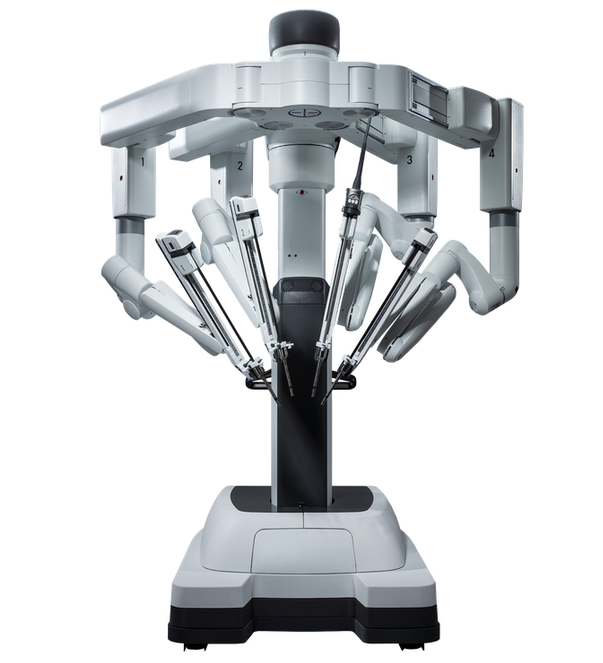 Over time, the thinking goes, the more tinkering, the greater the chance of finding evermore procedures that can benefit from the use of the daVinci, helping hospitals, doctors, patients, and shareholders alike.

That's why I still think its worth holding shares of the company, albeit at a lower level of exposure.