Please ensure Javascript is enabled for purposes of website accessibility
Log In Help Join The Motley Fool
Free Article Join Over 1 Million Premium Members And Get More In-Depth Stock Guidance and Research
By Bob Ciura – Aug 20, 2015 at 9:40AM

In typical Buffett fashion, here's why the Oracle of Omaha isn't worried about his huge IBM investment.

When Warren Buffett speaks, the entire investing world listens. There is good reason for this, as the Oracle of Omaha has proven himself to be one of history's greatest investors, having built Berkshire Hathaway (BRK.A 0.35%) (BRK.B 0.40%) into a massive conglomerate with a roughly $350 billion market capitalization.

In a recent interview, Buffett offered some interesting thoughts on several of his top investments. I was particularly intrigued by Buffett's comments on his investment in International Business Machines (IBM -0.26%). IBM stock has performed very poorly in the past few years. 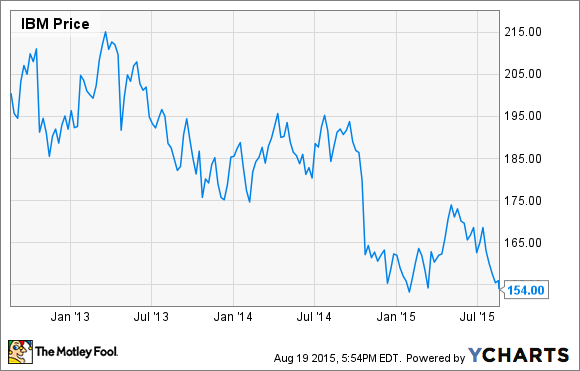 Surprisingly, Buffett said he loves IBM's declining stock price. If that sounds crazy, investors should know that there's a method to his madness.

IBM leaves a mark
As of June 30, Berkshire Hathaway held slightly more than 79 million shares of IBM. That represents approximately 8% of IBM's shares outstanding, which amounts to a $12.3 billion investment today.

This makes Berkshire Hathaway IBM's biggest shareholder. As a result, Buffett has a lot at stake in the technology giant. Buffett recently said that his cost basis is around $170 per share. IBM currently trades for about $154 per share, meaning that Berkshire's position is down roughly 9%.

That might not seem like much, but considering how many shares Berkshire owns, the position is suffering a paper loss of roughly $1.3 billion. That's a whole lot of money, but Buffett's not sweating it at all. Rather, in the same interview, he said, "I love it when a stock goes down." Although that sounds counterintuitive, here's why Buffett's sentiment is right on the money.

Don't count out IBM's turnaround
IBM's stock price is down because its revenue has been stuck in a prolonged decline. In fact, IBM's revenue has fallen for the past 13 quarters in a row. That is an infamous track record that makes IBM a scary proposition as an investment. Thus far, the company has suffered from an inability to expand quickly enough into higher-growth areas like Big Data, security, and the cloud, and it has been dragged down by less-profitable hardware businesses like semiconductor manufacturing.

But all of this is changing, albeit extremely slowly. IBM categorizes its newer growth ventures as its "strategic imperatives," which collectively grew revenue by 30% in the first half of the year, adjusting for currency and divestments. These businesses represented 27% of IBM's total revenue last year, compared to just 13% back in 2010.

The takeaway here is that IBM's turnaround remains intact, but it's taking a lot longer than many investors would like. However, in the meantime, IBM is still doing some good things for shareholders.

The beauty of buybacks
As IBM's stock price has declined in the past few years, its valuation multiples have contracted significantly. IBM now trades for 13 times trailing earnings and less than 10 times forward EPS estimates.

Importantly, IBM's stock decline has been the result of multiple contraction more than deteriorating EPS. This is an important distinction that explains why Buffett isn't worried about IBM's stock price. There is a vast difference between a stock price going down because investors aren't willing to pay a higher multiple, versus a stock price declining because of severe earnings deterioration.

The truth is, IBM's earnings have risen over the past five years, which puts its stock price decline into a different perspective. IBM shares are down 22% in the past three years, but IBM's earnings per share grew 8% from 2012-2014. That's largely the result of IBM's aggressive share buyback program. 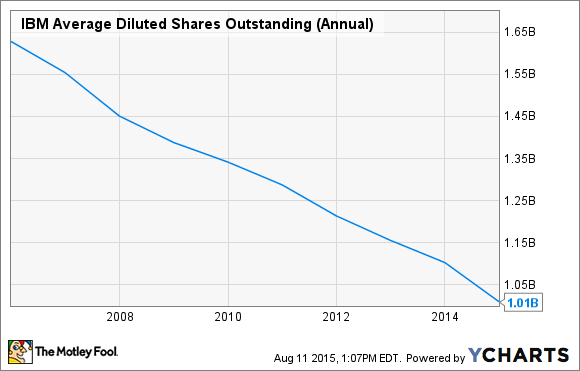 For all of its top-line struggles, IBM still generates a lot of cash. That's a testament to its strong business. It returns a great deal of this cash to investors through its share buybacks and dividends. From 2000-2013, IBM spent $108 billion on net share repurchases. This has reduced IBM's share count, which helps increase EPS, even if revenue is in decline.

Furthermore, while IBM has cut back on its share repurchase activity this year, its falling stock price allows it to buy back more shares with each dollar it spends on buybacks.

That's why Buffett isn't worried about his IBM investment, and neither am I.