Biofuels are no longer limited to hippies and high school science projects. They're clean, cost-effective, and increasingly important in our energy economy. Here's how United Parcel Service (NYSE:UPS), FedEx Corporation (NYSE:FDX), and United Continental Holdings (NASDAQ:UAL) are all buying up biofuels.

1. United Parcel Service
With around 240 aircraft and 106,000 cars, vans, tractors, and motorcycles to its name, UPS guzzles a lot of gas. In fiscal 2014, the company spent $3.8 billion on fuel, equivalent to 7.3% of all operating expenses.

But not all of that fuel has been from fossils. UPS has been at the forefront of alternative transportation energies to fuel its fleet. It has logged over 500 million miles on its more than 5,000 "alternative fuel and advanced technology" vehicles, a catchall for compressed natural gas, liquefied natural gas, hybrid electric, hybrid hydraulic, biomethane, ethanol, and full electric vehicles. 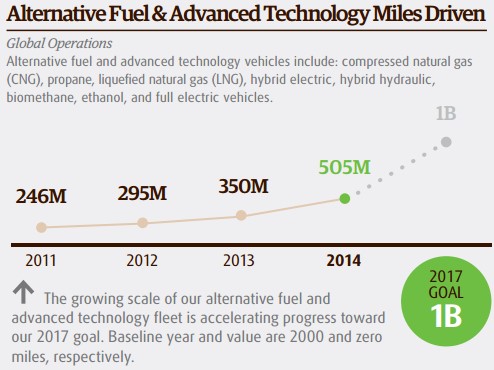 Last month, the company announced new agreements to purchase up to 46 million gallons of renewable fuels over the next three years. The company will source from three different suppliers: Neste, Renewable Energy Group, and Solazyme. Neither the financial details nor the slices were disclosed.

For many, this deal unofficially marks renewable fuel's transition from pilot project to scalable solution, and will help UPS transition more than 12% of its conventional diesel and fuel purchases to alternative fuels by the end of 2017.

2. FedEx Corporation
FedEx may have a smaller sales footprint than UPS, but its carbon footprint is unfortunately impressive. For fiscal 2015, it spent $3.7 billion on fuel, equivalent to 8.2% of its overall operating expenses.

At the end of fiscal 2014, FedEx laid claim to just over 1,000 alternative fuel vehicles. The company has also been hard at work replacing its air fleet with more fuel-efficient models, and hopes to rely on biofuels for 30% of its jet fuel by 2030.

In a 2012 sustainability report, it first noted that it had commissioned The Nature Conservancy to create a biofuels road map for the long-distance transportation sector. That road map seems to have paved the way for FedEx biofuels, as the company announced last month that it would purchase 3 million gallons of biofuel a year for the next eight years. That's a fraction of UPS' commitment of 15.3 million gallons per year, but it's enough to signal the start of real commitment. FedEx picked a single supplier, Red Rocks Biofuel, for its purchase. The biofuel company is expected to break ground on its first refinery this fall, with biofuel for FedEx ready in time for a 2017 start year.

Rather than enter into a purchasing agreement with one or more biofuel suppliers, United Continental Holdings, is actually investing in this alternative energy future. The airline announced in June that it would invest $30 million in FulCrum BioEnergy, a municipal waste-to-jet biofuel company. Brett Hart, United's executive vice president and general counsel, put it this way:

We know alternative fuels is an emerging industry that is vital to the future of aviation and this is just one of our initiatives to help make these fuels saleable and scalable. Investing in alternative fuels is not only good for the environment, it's a smart move for our company as biofuels have the potential to hedge against future oil price volatility and carbon regulations.

While United Continental Holdings' investment doesn't tie the airline to biofuel purchases, the two companies have signed an agreement where United will have the opportunity to buy up to 90 million gallons of biofuel a year for 10 years at comparative prices to fossil jet fuel. Fuel has been United's single-largest operating expense for the past several years. In fiscal 2014, the airline guzzled 3.9 billion gallons. In total, fuel purchases amounted to $11.7 billion, 32% of its overall operating expenses.

Bet big on biofuel?
UPS, FedEx, and United Continental Holdings are all buying up biofuels. Biofuels let each company diversify its reliance on fossil fuels, allowing it to gain a competitive edge over non-diversified tools. With these latest biofuel investments, this alternative energy has officially joined the ranks of other tried-and-true diversification and cost-cutting tools like hedging, indexed surcharges, and energy efficiency initiatives. While biofuels are still an emerging industry, investors can rest easier knowing that these corporations are making smart strategic moves to keep their stocks strong and steady.