I'll be honest. As a consumer, I've never been a big fan of Yelp (NYSE:YELP). There are a few reasons, but the most prominent is that I simply don't trust the review service: I don't think Yelp is being honest with me.

Years ago, local merchants really could just pay to remove bad reviews, with the hopes of helping their business. This dubious business practice and the associated extortion allegations have haunted Yelp for years, even as it has tried to distance itself from the past.

Yelp has tried very hard to regain some of that lost trust, assuring visitors that companies "can't pay to alter or remove their reviews." This notice is posted on the top of every review page now, which takes you here:

That being said, Yelp still filters many reviews based on its own proprietary algorithm. The company is trying to find the most relevant reviews based on "quality, reliability and the reviewer's activity on Yelp." Yelp implemented this black box of a system a couple years ago.

But for me, I still can't find myself trusting Yelp and I'm not alone. I've gone as far as to short the stock recently, even as shares trade at fresh 52-week lows. Here's why.

Ignore the top-line growth
Sure, Yelp is putting up some healthy growth figures. Revenue last quarter soared 51% to $133.9 million. That was driven by 40% growth in local advertising accounts, which now stand at roughly 97,100. Mobile unique visitors also jumped 22% to 83 million. But the market is rightfully looking past the top line and focusing on the cracks in the business. And there are plenty.

Not only did Yelp's full-year guidance leave a lot to be desired, with revenue expected in the range of $544 million to $550 million, but Yelp faces many other fundamental challenges going forward. The company is shuttering its display-advertising business since it detracts from the mobile-user experience. Management believes this is the right long-term move. It's true that mobile display ads are intrusive, but brand advertising was 9% of revenue last fiscal year so this decision will weigh on the top line.

Death of a salesman
Perhaps more troubling, Yelp has been having trouble beefing up its sales team. (On a related note, the heavy reliance on a human sales team has always been a scalability concern for me -- sales and marketing was 56% of operating expenses and 51% of revenue last quarter.) Yelp acknowledged that it is having difficulty growing its sales team. It was planning on growing sales headcount by 40% this year, but now only expects 30% growth of sales people.

Competition for sales talent in Silicon Valley is very intense and it's becoming harder to retain the top producers. Sales productivity also took a hit in the first quarter following a territory reorganization, after which Yelp quickly backtracked the changes.

The issue with sales team retention is perhaps evidence of another, more troubling problem: churn. Yelp has never been very explicit about its churn rates. Instead, the company discloses a "customer repeat rate," which consists of advertising customers that contributed recognized revenue during the preceding year. The inverse is an approximation of churn. 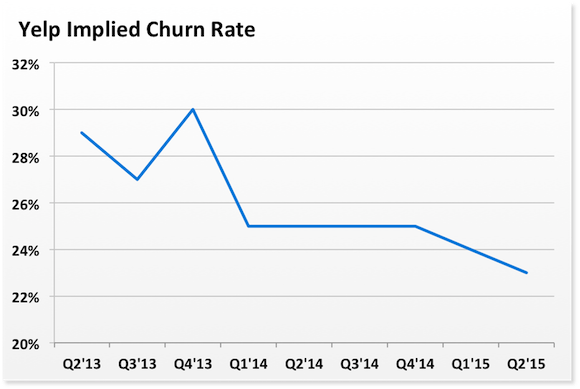 To be fair, Yelp has been improving this figure in recent quarters, but at the same time a churn rate of over 20% isn't what I would consider healthy. That's an awful lot of local advertising customers that don't see value in Yelp's ads, while small local businesses don't have lavish marketing budgets.

In the long run, this doesn't seem very sustainable when considering the high cost of acquiring new customers in the first place (see aforementioned sales and marketing expenses). High levels of churn also make it hard to compensate salespeople competitively. It's a vicious cycle.

Big G wants a piece
Like just about every tech company these days, Yelp is trying to navigate the transition to mobile. On the desktop, Google (NASDAQ:GOOG)(NASDAQ:GOOGL) continues eating away at Yelp's traffic since Yelp has long derived over half of its desktop traffic from the search giant. As Google continues pushing its own local rankings and reviews, it will keep the pressure on Yelp's desktop business.

That's why it's notable that last quarter marked the first time that Yelp's mobile unique visitors surpassed desktop unique visitors, as evidence of some progress on this front. But the fact still stands that nearly half of all unique visitors are still coming from desktop and this figure is shrinking.

There are now roughly 18.1 million unique mobile devices using Yelp's mobile app. Can Yelp profitably grow its mobile business faster than Google chips away at its desktop business? Probably not.

Buyout risk?
As with any short position, a significant risk is shares jumping on any unanticipated news. Yelp is no stranger to acquisition speculation since there are some obvious synergies with larger rivals.

In May, The Wall Street Journal reported that Yelp was looking to sell itself amid slowing growth and rising costs, hiring Goldman Sachs for the process. A couple months later, Bloomberg said that Yelp was calling it off, wanting to stay independent even though it had "several interested suitors." Analysts didn't buy it (pun intended), noting that deteriorating fundamentals make Yelp a tough sell and considered it a distinct possibility that Yelp was just posturing for the media while failing to find a buyer.

Larger rivals can easily build their own local advertising and reviews businesses for much less than it would take to acquire Yelp. More importantly, they already are. Any potential buyer would have to spend over $2 billion for a company trading at 73 times forward earnings. I'm not too worried about a buyout from out of left field.

Low and heading lower
Fool co-founder David Gardner has a saying: Instead of the ubiquitous "Buy low, sell high" axiom that's been beaten into your investing brain, David says, "Buy high and don't sell." It's the ultimate Foolish ethos, and somewhat counterintuitive since investors often sit on the sidelines for fear that they've already missed out on a stock's run. But David's thinking is that stocks that are running hot are usually doing something right, and they can often continue higher if they are able to execute. As long-term investors, Fools don't sell unless they have to.

The inverse of this rationale is that stocks that are performing poorly are likely to continue losing value, especially if the execution remains poor. This is why I'm unafraid of shorting Yelp at the lows. Sure, I would have liked to have shorted shares at the beginning of the year (shares are down 55% year to date), but better late than never.