Cord cutting is real. Now, the biggest question everybody wants to answer isn't whether Americans are ditching the pay-TV bundle for streaming services like Netflix (NASDAQ:NFLX), but simply how fast the transition will occur.

The U.S. pay-TV industry had a record number of subscriber losses last quarter, shedding 625,000 customers. Still, that's a decline of less than 1% from a base of 100.4 million households. Additionally, cable and satellite TV are seasonal businesses, meaning that those numbers should move closer to zero or even turn positive when the winter months arrive.

Anyone's guess
No one knows for sure how fast consumers will switch from linear TV to Internet TV. At a conference earlier this year, Netflix CEO Reed Hastings said, "We will come to see that linear TV declines every year for the next 20 years, and that Internet TV rises every year for the next 20 years." Perhaps the most interesting part of the statement from the man as responsible as any for the cord-cutting phenomenon is that it assumes linear TV will still exist 20 years from now.

Time Warner CFO Howard Averill has said he expects customers to transition to smaller bundles rather than simply cutting the cord. Time Warner also noted that it's seen almost no cannibalization of its HBO premium service from its streaming complement HBO Now, an indication that cable subscribers are happy with the bundle.

Disney CEO Bob Iger echoed that statement, saying that he doesn't see "dramatic declines" in the cable subscriber base over the next five years that would lead his company to launch a stand-alone version of ESPN.

Even as the media honchos downplay the effects of cord cutting, they are still hedging their bets with the launch of stand-alone services from CBS and its premium network Showtime, HBO, and even cable leader Comcast. The latter has gotten involved with a $15/month package called "Stream" that bundles a handful TV channels with HBO and only requires broadband service to watch.

How the paradigm shifts
Some technological changes come suddenly, like the shift from film to digital photography, while others are much slower. There's no perfect analogy for cord-cutting, but the best place to look for a comparison is other media industries.

Digital music has been around for well over a decade now, and it has overthrown the old model of physical album sales, which had evolved through records, cassettes, and CDs. Domestic CD sales peaked in 2000 at 730 million and have declined gradually to just 140 million in 2014, or less than 20% of its peak total. On average, sales fell 11% a year during that period.

The print newspaper model was similarly upended by the Internet. Free news sites like The Huffington Post popped up, and even newspapers themselves made the unfortunate decision to offer their own content free of charge on the web.

Total newspaper circulation has actually been falling since 1990, before the Internet, as the evening newspaper fell out of fashion, but the decline has sped up in the digital age. In 2004, total weekday newspaper circulation in the U.S. was at 54.6 million, but it would fall nearly 20% to 44.1 million over the next 10 years.

Perhaps more importantly, print ad revenue has been decimated by the circulation decline and the rise of alternate ad channels like social media. This bodes poorly for cable channels that get significant ad revenue.

Two paths
Unlike technological shifts like the digital camera, changes in media consumption tend to occur on a more generational basis. Part of the reason why music sales transitioned faster than newspapers is that music sales are driven by young people, and the ease of piracy eliminated the need to buy CDs. With Internet media having been around for only 20 years, there are plenty of older Americans who were raised on the daily newspaper and are happy to keep it that way, for a price that is notably much lower than your average cable subscription.

Cord-cutting will take place in one of two ways. Either the steady trickle away from pay-TV services will continue as most Americans remain content to fork over an average of $87 a month for the bundle, or it will accelerate with the assistance of a feedback loop of improving technology, content, and options. I suspect the latter will be the most likely scenario of the two.

As traditional media companies lose viewers and ad dollars, the need to partner with a streaming service like Netflix -- or just go it alone like HBO Now -- will become more prevalent. Smart TVs will become even more commonplace, making watching Netflix at home as easy as cable. Meanwhile, Internet TV providers will add to their library of original programming, so cord-cutting will only become more appealing. As its popularity grows, the incentive to cater to cord-cutters will increase along with it.

Like the decline of newspapers and CDs shows, linear TV isn't about to die, and as Hastings indicates, there still will be millions of subscribers 10 or 20 years from now. But its relevance is already weakening, and the business model could suddenly crack.

As the stock crashes in the industry earlier this week show, expectations of cable profits were already inflated. For comparison, the chart below shows The New York Times Co stock, which tumbled in the 2000s as ad sales fell, and offers one potential scenario of the future for these stocks. 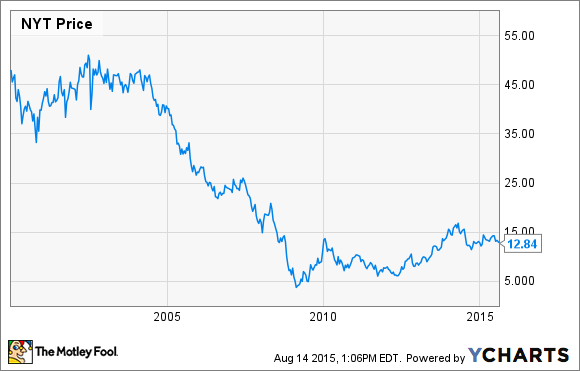 Subscriber losses are already happening, and ad sales are falling. The dismantling of the business model won't happen overnight for these media titans, but the acceleration of cord-cutting is a huge risk for content creators and cable and satellite providers alike. Capitulation and joining the over-the-top fray may be the only choice.

For these companies, the biggest question facing them isn't how fast cord-cutting will take place, but what to do when it does.