It was only about a week ago when I last wrote about Apple (NASDAQ:AAPL) stock trading at a deep discount. But with the stock trading even lower, the point is worth reiterating. This time, instead of using a discounted cash-flow valuation to show how cheap the stock is, let's compare it with a few other companies. How about comparing Apple with fellow megacaps McDonald's (NYSE:MCD) and IBM (NYSE:IBM)?

The underlying businesses
Apple, McDonald's, and IBM all run very different businesses. But for these gigantic cash cows, it will ultimately be their bottom-line growth that will make or break these stocks over the next decade. With this in mind, let's look at the sort of growth in earnings these companies are currently serving up investors.

McDonald's net income in the trailing 12 months is lower than net income in any year since 2007. The company's bottom line peaked in 2013 at $5.6 billion. Since then, it has trended lower, hitting $4.2 billion in the trailing 12 months. Further, McDonald's TTM EPS of $4.31 is more than a dollar below its 2013 EPS of $5.55. The weaker net income recently is driven by declining revenue, a lower gross profit margin, and rising operating expenses as a percentage of revenue.

IBM's net income in the trailing 12 months was $11.3 billion -- also its lowest since 2007. The company's bottom line peaked in 2012 at $16.6 billion and has been trending lower ever since. Further, EPS are also down substantially; after reaching highs of $14.37 and $14.94 per share in 2012 and 2013, IBM's EPS in the 12 trailing months are a much lower $11.36. Like McDonald's, declining revenue, a lower gross profit margin, and rising operating expenses as a percentage of revenue are playing a key role in driving net income lower.

Apple's earnings story is quite the opposite. In fact, it's quite astoundingly positive. TTM net income is at an all-time high, at $50.7 billion. And it's up significantly from its 2014 net income of $39.5 billion. Apple's TTM EPS of $8.65 is up sharply from $6.45 and $5.68 in 2014 and 2013, respectively. This earnings growth is driven by year-over-year revenue growth around 30% in recent quarters, a rising gross profit margin, and lower operating expenses as a percentage of revenue. 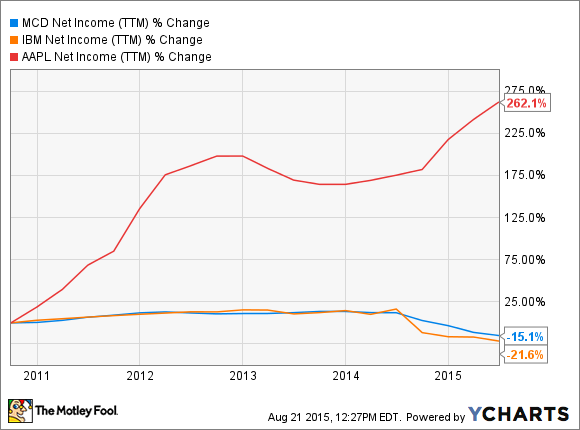 Valuation
While there's obviously more to the story than these companies' recent earnings histories, this background is enough to at least realize there's no reason Apple's price-to-earnings ratio should be lower than either of these companies. Indeed, given Apple's excellent performance in recent years, it would make sense for Apple to trade at a much greater premium to earnings than both McDonald's and IBM.

Sure, investors shouldn't expect Apple to continue to grow its bottom line the way it has recently in the years ahead. But the fact that it was even possible for this tech giant to deliver such incredible results for shareholders during the past year should be enough to merit a higher premium to earnings than 12.5. Further, by comparing Apple with McDonald's and IBM, it's clear the market's sell-off of Apple stock has gone too far.

I already own Apple stock, and it already represents a good chunk of my portfolio. But I'm seriously considering buying more Apple stock in the coming days. Right now, it's looking like a great buy.