Please ensure Javascript is enabled for purposes of website accessibility
Log In Help Join The Motley Fool
Free Article Join Over 1 Million Premium Members And Get More In-Depth Stock Guidance and Research
By John-Erik Koslosky - Aug 23, 2015 at 8:11AM

A new patent would allow lenders to make judgements about a user's creditworthiness based on that person's friends. This technology might be valuable, but would it really make good business sense for Facebook?

Facebook (FB -0.49%) recently received an updated patent that could have users rethinking their friend lists. The patent, which originated back at Friendster before it was acquired by Facebook, covers a number of new technologies, including ways to better filter unwanted messages and spam, as well as providing better search results.

But the most interesting function is one that would allow banks and other lenders to look at your friends, assess their credit ratings, and make decisions on your creditworthiness based on what they see.

As Fortune noted in a recent article about the patent, consumer lenders are already using "non-traditional data" -- like social media profiles -- to estimate credit risk. But this technology, if it is ever implemented, would seem to take that a critical step further, allowing lenders access to a collective score of friends' credit in order to make a determination on a loan for you.

Here's how the patent reads:

If only you knew how financially responsible these people are, this would be much easier. Image source: www.facebookbrand.com.

Using non-traditional sources of information like social media accounts to make determinations on credit risk can be especially useful in cases where an applicant has little credit history. There are a number of lenders -- or outfits that supply credit information to them -- that have started to use these non-traditional information sources when considering loan applications. But in most cases, this is done only with the approval of the applicant, and often because it could work in their favor if they do not have a strong history of borrowing.

But the practice is becoming more common, and as Forbes noted in an article in January, banks seem to be "growing comfortable with the idea," as it helps them to tap customers they may have previously seen as off-limits.

A big question at this point is how your Facebook information would be used. It's unlikely that many would complain if it helped them get a loan. But the possibility of losing a loan over your Facebook friends' poor spending habits is unlikely to sit well with anyone who has worked hard to earn a higher credit rating. Still, would it be enough to make people change their Facebook habits?

Not the first controversy...
Facebook has a history of pushing boundaries with the information it collects from users. Remember when users learned that the company's new privacy policy allowed it to freely use your photo and name in advertisements?

But Facebook also has been quick to turn on its heel and retreat when those users bristle en masse, like it did in 2011 over the outcry about a change that made users' default settings display information publicly. That change drew the attention of the Federal Trade Commission, but the company eventually reached a settlement that ensured its users would have to provide consent before information was publicly displayed.

Or we can look back to 2007, when a mass protest erupted over a new advertising program that sent messages to users' friends about what they were buying on affiliated websites. More than 50,000 Facebook members signed a petition objecting to the program, and demanding the option to opt out. The company, in turn, pledged that it would not reveal the purchases without getting explicit approval from the user each time.

... and it won't be the last
It's important to understand that Facebook has to push boundaries in order to stay near the top of the digital advertising market, which is in a constant state of change. After all, the company makes its money by figuring out ways to use all that information you post, whether it's profile updates, messages, likes, reviews, or photos.

So far, Facebook has been wildly successful in that mission. Since the company went public in 2012, its trailing 12-month revenue -- most of which comes from ads -- has nearly quadrupled. 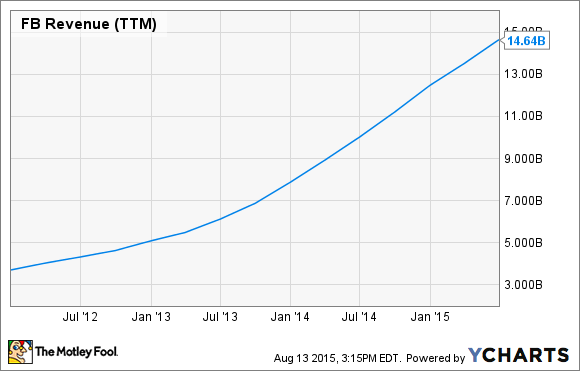 In 2014, it owned nearly 8% of the entire digital ad market worldwide, but winning a bigger share of that market also requires a delicate balance. For that success to continue, the company also needs to keep finding ways to get its users posting more information, interacting with one another, and interacting with advertisers.

And Facebook continues to work hard in that department. Consider CEO Mark Zuckerberg's comments on the last earnings call:

News Feed at the core is proving to be just a great experience for users. It's getting better. We continue to invest in that. As people spend more time with News Feed, we get better about understanding what they like and getting the content that they care about in front of them. So we're investing on that front.

Will it happen?
That's why the credit-score move seems an odd one. While it would potentially open up a new avenue of business with lenders, it also has the potential to radically change how users decide who to interact with on the site. Approving the wrong friends could potentially cost a user a loan -- or possibly worse, make them more susceptible to predatory lenders.

Facebook owes much of its success as a social platform to what we call "the network effect." The more people who join the site, expand their group of friends, and engage one other, the bigger reason other people have to join, reach out, and share more about their lives.

A move that would cause users to trim their friends' lists and think more carefully about their interactions would have the potential to undermine the work Facebook has done to build its powerful network. And that's what makes technology like this so tricky to implement.

Facebook has yet to publicly comment about the language in the patent. It may not be something the company ever chooses to exercise, but it's something that investors -- and users -- should keep their eyes on.