The controversial billionaire George Soros' fund, known as Soros Fund Management, is one of the most active firms in terms of buys and sells on a quarterly basis. Per the recently filed 13Fs, for example, the fund churned through about 62% of its first-quarter holdings. To put this number in context, Bill Ackman's Pershing Square's quarterly turnover stood at a mere 14%, and Warren Buffett's Berkshire Hathaway at a measly 6.5%.

Soros Funds' hyperactivity stems from its core underlying philosophy of exploiting trends within the marketplace, typically on a short-term basis. Put plainly, stocks with positive catalysts are bought, and those facing headwinds are generally sold with gusto.

So it wasn't entirely surprising when the fund began to dump its former largest position, Teva Pharmaceutical Industries Ltd. (NYSE:TEVA), last year as the generic and specialty drugmaker was staring down an imminent threat from the entry of generic Copaxone, the multiple sclerosis drug that tends to make up around 20% of the company's quarterly sales. In fact, the fund sold off its remaining shares in the first quarter of this year.

Living up to its reputation, however, Soros Fund rebought about $25 million or 423,308 shares of Teva in the second quarter, according to the quarterly 13Fs. Although this latest purchase pales in comparison to the fund's former holdings of the drugmaker, it is interesting that Soros and his team had such a sudden change of heart. With this in mind, let's consider why the Soros Fund may have reversed course on Teva and if everyday investors should view it as a compelling buy signal moving forward.

Teva's $40.5 billion buyout of Allergan's generic drug unit might be key
Teva was reportedly pursuing a $40 billion buyout of generic drug rival Mylan earlier this year to help offset any revenue losses from Copaxone and keep the company's earnings per share headed in the right direction. However, the Street was less than enthusiastic about this deal because it was viewed as a rich price for a deal that wasn't necessarily a good fit.

And then Teva surprised most of us with its somewhat out-of-the-blue deal for Allergan's generic drug unit that was resoundingly cheered by the market. Since this buyout was announced in late July, for instance, Teva's stock has gained more than 12%: 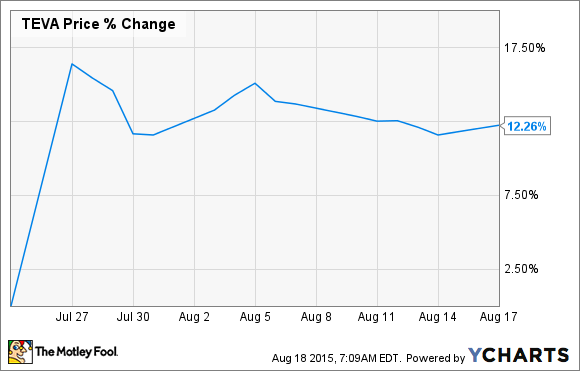 Because this particular deal came through after the close of the second quarter, it's obvious that Soros Fund didn't reenter Teva for this particular move. But it may have initiated a position in anticipation of some sort of deal, foreshadowed by Teva's heavy interest in Mylan.

What's next?
The primary reason investors are happy about this deal is because it gives Teva over 1,000 new products, potentially triggering a double-digit rise in the drugmaker's diluted earnings per share for the next several years. The downside is that the new debt arising from this purchase is probably going to hamstring the company in terms of making any further major moves on the M&A front.

That said, it is expected to result in $1.4 billion in cost savings over the next three years, and free cash flows are estimated to shoot up to $6.5 billion next year. That means Teva should easily be able to both service its debt, as well as reward shareholders through its dividend program.

Teva thus looks like an intriguing growth stock that offers a sustainable yield of 2% at current levels, after this transformative move by management. As such, investors shouldn't be surprised if Soros Fund increases its position in Teva this quarter. Investors, therefore, might want to take a cue from this gigantic firm and add this dividend-paying pharma company to their portfolios.