Then today hit. The Dow dropped 1,000 points this morning, recovered most of it, but still finished the day down another 3%.

It's not fun. I know so many investors who, during bull markets, say they can't wait for a pullback so they can buy cheaper shares. Then the pullback comes and they say, "You know what, this actually isn't fun. It hurts to see your net worth go down." In psychology, "prospect theory" is the idea that a loss hurts multiple times worse than a gain. It's real, and it's powerful. Investor Ben Carlson put it this way last night: "Stocks rose more than 400% in the 1980s, but all anyone remembers is the crash of 1987."

But if you look at those stats I provided above, you can only come to one conclusion: This stuff happens.

You've heard the standard advice: Don't panic. This is normal. Stick to your plan. Think long term. Maybe start looking for bargains, as a lot of us are.

But when this stuff happens I also wonder: What happens next?

Statistically, I mean. On average. Because no one knows exactly what happens next. Crunch all the data in this chart, and you'll see that the market is at an all-time high just 7% of the time. And ...

In other words, the market is where we are today or lower from its previous all-time high about half the time. And again, that's during a period when the market made millionaires out of modest savers.

So, think about that. Stocks are down about 10% from their all-time high. Historically, half the time this happens they fall another 10% or more.

Now for the Good News

Everything about successful investing comes back to one thing: The long run.

Earlier this year, in The Beauty of Bear Markets, I looked at the five years after the market drops by a lot. Here's what I found: 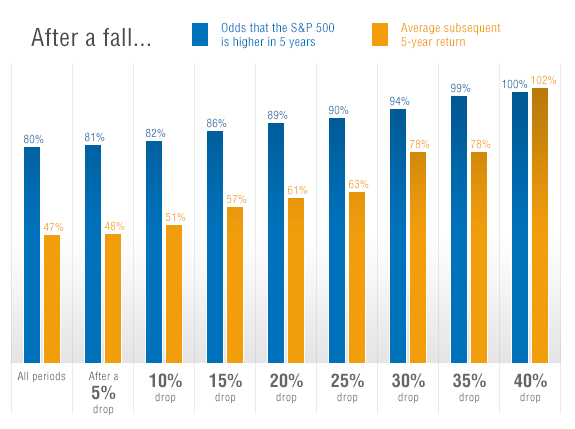 I heard a smart person on TV last week say something along the lines of, "With markets falling, it's time to be careful."

Really? That kind of thinking is exactly why most people fail at investing. The time to be careful is when everything is going well. That's when you create a long-term plan that helps you endure through volatility.

The most important thing to remember right now is that today's pain plants the seeds for tomorrow's gains. That's always the case in investing. The reason the market has done so well over the last six years is specifically because we had a terrible bear market in 2008. The pain of last week sets us up for higher, and more probable, future returns. It could easily get worst from here. But the worse it gets, the higher the odds of future success. That's why I shake my head at comments like that on TV. The last thing you want to be is be ambitious last Monday and careful today.

The lines outside Chipotle are still long. The willingness to pay $5 for Starbucks coffee is still strong. The engineers at Tesla are still geniuses. When I think about "what next?" that's what I think about. It's what ultimately matters most, and what you'll remember most when looking back at your investments years from now.

Nick Murray, one of my favorite investment writers, once wrote:

Yes, that's right, it's six billion two hundred million dollars. A very large sum of money, wouldn't you say? Now what, you ask, does it represent?

It is roughly how much Warren Buffett's personal shareholdings in his Berkshire Hathaway, declined in value between July 17 and August 31, 1998. And now for the six billion dollar question. During those forty-five days, how much money did Warren Buffett lose in the stock market? The answer is, of course, that he didn't lose anything.

Why? That's simple: he didn't sell.