The warehouse giant has been trouncing competitors on this metric for years.

It wouldn't be easy to pick a single reason Costco (COST -1.65%) is one of the best retailing stocks on the market. But I'd offer these three candidates for the short list: a membership fee-driven business model, a generous dividend policy, and the potential for strong warehouse expansion, particularly in overseas markets.

Yet if you want to look at just one number to see how well Costco is performing when stacked up against rivals, focus on comparable-store sales growth. The bulk retailer has posted 6% or higher comps in every fiscal year going back to 2011:

Keeping competitors off balance
By comparison, other big retailers such as Target and Wal-Mart's Sam's Club are logging comps growth of between 1% and 2% right now. Costco has been stealing market share from these and other national, regional, and local competitors for several years running. Most recently, it has set its sights on the organic food grocery segment and quickly built that out into a $3 billion annual business.

And we're not just talking about a temporary spike of members craving that $1.50 hot dog lunch combo. Instead, Costco has been increasing its shopper traffic level by 4% each year for six years running.

Keeping customers happy
Costco's growing base of Costco's extra-happy customers is driving that market-thumping traffic gain. The company dominated this year's survey from the American Consumer Satisfaction Index by nabbing a first-place 84 score out of 100. Shoppers praised Costco for keeping its prices low even as rising costs forced grocery, apparel, and electronics competitors to jack prices up by as much as 3% last year.

Rising customer satisfaction shows up in Costco's membership renewal rate, which is also marching further into record territory. Subscribers can cancel their annual membership at any time during the year for a full -- not prorated -- refund. Yet a ridiculously small proportion of shoppers actually take Costco up on that generous offer. The company's renewal rate has improved in each of the past five fiscal years and is now sitting above 90%: 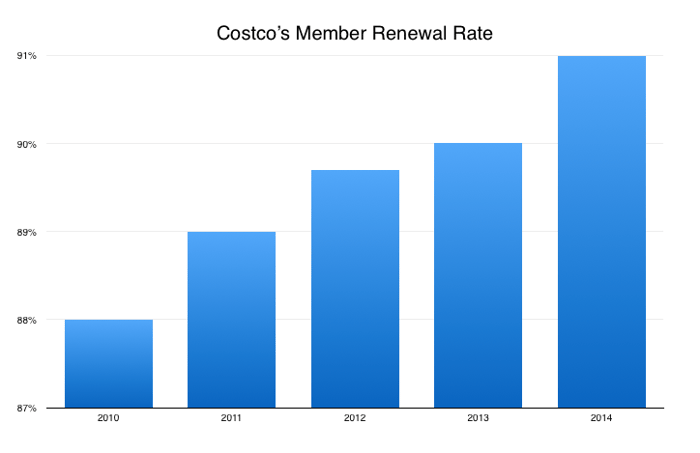 Since Costco is a membership club first, and a retailer second, the renewal rate is critical to the businesses' success and in fact powers the majority of profit generation (75% of earnings in the last fiscal year).

Can the company keep it up?
Chief Financial Officer Richard Galanti was asked in last quarter's conference call about how long Costco's unusually strong traffic growth can continue. Here's what he had to say:

When the economy kind of crashed in late 2008, I remember at the end of calendar 2009 when we had a full year of right around 4% maybe 4.1% or 4.2% [traffic] increases, I remember warning everybody that if it's 0% in calendar 2010, that's 2% compounded, which is better than our historical average. So how can we sustain that? We are now six years of a little over 4% compounded. In my view, anything in and around that range we will continue to try to do, but there is no predicting it.

The future length of Costco's string of 6% comps gains has more to do with the health of the economy than anything else. But rising customer traffic is likely to be the basis for extra market share improvement in the years ahead. The good news for investors is that Costco has demonstrated how it can succeed there by focusing on turning more of its members into enthusiastic repeat shoppers.