Based on Magellan Midstream Partners' (NYSE:MMP) recent stock performance, you might think that the company is hitting hard times just like the rest of the industry. Looking at its most recent quarterly results, though, that doesn't appear to be the case. Not only was it able to raise its guidance for distributable cash flow, but management hinted at a few things that suggest the company will be able to keep growing that cash load for a while. Here are five quotes from CEO Michael Mears on the company's most recent conference call that give some indication as to how it plans to fuel further distribution growth.

1. We've got some growth in the pipeline
Looking across the pipeline landscape in the United States, one thing that sticks out in many investors' heads are the attention-grabbing dollar figures attached to some companies' growth pipeline. By comparison, Magellan's $500 million just doesn't look as impressive. 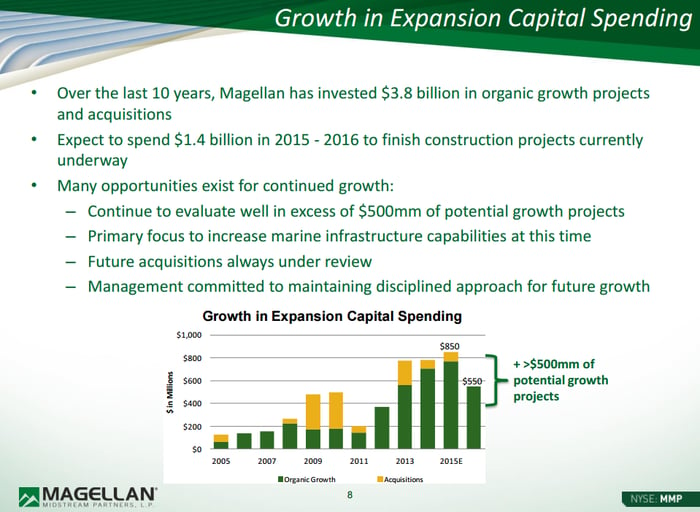 Just because that number isn't headline worthy compared to its peers, Magellan sees lots of opportunity to grow from that number in the coming years.

Magellan continues to have well in excess of $500 million of future growth projects under development. These projects include multiple potential projects in the Houston area to expand our marine capabilities. For instance, Magellan has initiated engineering, design and permitting to add a new ship dock and additional storage at our Galena Park terminal as well as enhance connectivity between Galena Park and our Houston crude oil distribution system. This project would enhance our marine-refined products services and further expand our comprehensive crude oil system in the Houston Gulf Coast area.

Some of these are what you would consider smaller bolt-on additions to the company's current infrastructure network and aren't huge projects by themselves. Combined with the rest of the system, though, it can give customers many more options for where to sell its products, which will increase demand for Magellan's services.

2. Keeping the bookkeeping clean
Over the past several years, investors in pipelines or master limited partnerships like Magellan have reluctantly accepted the fact that in order to grow, companies would need to raise capital through equity issuances. Ever since Magellan bought out its general partner and eliminated incentive distribution rights, though, the company has been able to more easily retain cash from its operations to help fuel its growth. According to Mears, this trend will continue for some time.

And as usual, with our strong balance sheet, we do not anticipate the need for any equity issuances in the foreseeable future to fund these projects.

At present, the company has a debt to EBITDA ratio of 2.9 times, a very comfortable debt position for a company in this space that gives it room to grow without compromising its financial standing too much. This bodes well for the company's plan to increase distributions by 15% in 2015 and another 10% in 2016.

3. No buying for buying sake
A question that has been on the minds of many investors and analysts is when we will start to see some consolidation in the oil and gas space, especially the rather fragmented pipeline business. According to Mears, the market just isn't as attractive as it might seem today because the asking price for assets remains rather high.

We get asked from time to time if there are any bargains to be found due to distressed sellers with the current uncertainties in the energy industry. However, with various deals we have seen and the transactions that have been announced in the space, it's clear that prices remain at elevated levels. While we are always looking for additional assets to acquire, we remain committed to stay the course for disciplined growth that will benefit our investors in the long term.

Magellan will probably do an acquisition sometime in the future -- after all, it's has been a major part of the company's strategy over the years. However, the chances of it happening anytime soon appears to be slim based on this kind of statement.

4. What pipeline oversupply?
As drilling activity has declined in the U.S., one fear is that pipeline capacity will exceed total transport volumes. While that may be a concern for some, it doesn't seem to be influencing much of Magellan today.

I want to remind our investors that Magellan's 4 large crude oil pipelines, Longhorn, BridgeTex, Saddlehorn and Double Eagle, are all supported by long-term take-or-pay contracts at levels that provide attractive returns on the investments, and we won't be back in the market to recontract these systems for quite some time. From a long-term perspective, we also believe that the long-term value of these assets should be evaluated considering all commodity price cycles and not just current price conditions. We believe our systems and business model are well positioned to generate short-term growth and sustain long-term value.

Most of these kinds of contracts are 10 to 20 years long. So unless some of the companies Magellan work with go belly up, a lack of revenue from its crude oil pipeline segment shouldn't be an issue.

5. Opportunities hitting the water
So with land activity in the U.S. slightly in decline, where do midstream and logistics providers like Magellan see future growth potential? Mears believes there is a lot of opportunity getting U.S.-produced products to the coast.

So we think we've got a strong growth trajectory into 2017. Beyond that, I mean, clearly once you start getting out 3 or 4 years, the visibility on growth becomes cloudier for us and for everybody just given how far forward that is. But we have mentioned a few things here today that are kind of our core strategy, particularly with regards to marine infrastructure. And the market, even in this environment, is asking for more marine infrastructure with regards to crude oil and condensates. And so that is a primary growth strategy for us. The potential capital deployment opportunities are pretty significant there.

This sort of strategy seems like a harbinger of easing export restrictions. While there is no clear indication that this will happen soon, it appears that Magellan sees it as a long-term opportunity.

What a Fool believes
Magellan Midstream Partners may not wow you when you look at the company's growth prospects, but you can rest assured that the projects it has selected will definitely generate long-term value for the company while maintaining financial flexibility. This approach has been working for years. And based on what management is saying, that should continue for years to come.