When a stock trades at a cheap valuation, there's always a reason why. To take a chance on a stock like this, there needs to be a realistic turnaround story. Why is the stock so cheap, and what is the company doing to fix it?

In the case of Zions Bancorporation (NASDAQ:ZION), I think the turnaround is real, and worth a closer look.

Zions is cheap, and the reason is earnings
Zions currently trades about 1.1 times its tangible book value. That compares to an average price-to-tangible-book-value ratio of 1.85 for the bank's peer set of 60 similarly sized U.S. banks.

The reason for the valuation is simple: The bank's profitability stinks. Second-quarter return on equity was just 0.7%, and as the trailing 12-month chart below shows, ROE has been volatile and low during the past few years. 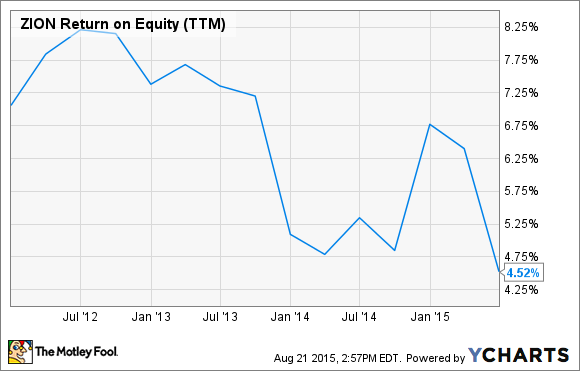 A big driver of this poor performance is poor efficiency. The bank's efficiency ratio was 71% in the quarter compared to 61% for the peer set. The efficiency ratio is the ratio of a bank's non-interest expenses and net revenue. A lower ratio indicates a more efficient operation.

In Zions' case, the efficiency ratio is pointing to a bloated cost structure.

Any other big problems?
Before we talk about an earnings turnaround, let's first take a moment to assess other considerations, and make sure there aren't any other problems lurking.

On the credit quality front, the bank's metrics are in line with industry averages. The ratio of Zions' non-performing assets to total assets was 0.7% in the second quarter, versus 0.66% for the peer set. Non-performing assets are severely past-due loans plus foreclosures.

The bank's assets to shareholder equity is a perfectly acceptable 7.75 times, and its common equity tier 1 ratio is 11.91%. By both measures, the bank is very well capitalized, so no overt danger there, either.

The turnaround argument
With no major issues jumping out in the loan quality and capitalization metrics, it's time to talk about a turnaround.

First, Zions' second quarter was sabotaged by a $137 million accounting charge caused by the sale of a large portfolio of CDOs, or collateralized debt obligations. In the bank's annual stress-test process, these CDOs projected a massive, outsized loss in the severe economic downturn projections. The CDO portfolio wasn't generating all that much profit to begin with, so instead of fighting with regulators and setting aside even more capital to mitigate the CDO risk, the bank chose to sell the portfolio.

In other words, this short-term $137 million loss is actually a positive development, dramatically lowering the risk on the bank's books. If we add this one-time charge back to second-quarter earnings, Zions would have reported approximately $135.9 million in profits, a 30% increase from the 2014 second quarter.

Longer term, the bank's management has recognized the problem with high costs, and has implemented a multi-year cost cutting initiative. Management is projecting a mostly stable efficiency ratio for the rest of 2015, a decrease to about 66% by the end of 2016, and a ratio in the low 60% range by 2017.

Paving a path for a brighter shareholder future
There's nothing fundamentally wrong with Zions; the bank just needs to continue making progress at unlocking its earnings engine. All of these efforts, if executed to plan, will lower costs, increase profits, and reduce risk on the bank's balance sheet.

In other words, I believe this is a turnaround story that should pave the way for a higher valuation and shareholder returns over the next few years.