An interesting pattern is taking shape as the economy rebounds. Americans are spending less on things and more experiences. For years, psychologists have been telling us that the best way to convert money into happiness is by spending it on experiences, not material possessions, and it seems that more and more Americans, especially millennials, are taking that advice to heart.

Millennials, who have been criticized for delaying major purchases like cars and homes, are the biggest drivers behind this transition, with surveys indicating that a vast majority prefer spending money on experiences rather than stuff. In a Harris poll on behalf of ticketing company Eventbrite, 78% of young adults said they'd rather spend their money on doing things rather than owning things, and the share of consumer spending on live events such as music and sports has nearly doubled since 1990.

A scene from Coachella, the annual California music festival founded in 1999. Days-long concert events like these have become wildly popular with millennials. Source: Wikimedia Commons.

This glacial shift is borne out in other numbers as well. For the first time ever, Americans are now spending more on restaurants and bars than on grocery stores, with monthly spending on each category in the $50 billion range. A generation ago, groceries attracted nearly twice as many sales as restaurants. Now, the gap is widening the other way, as the 9% jump in restaurant and bar spending this year indicates.

There's no simple explanation for this as pop psychology, generational shifts, and the proliferation of smartphones and social media have all contributed. Social media in particular has made it much easier to share your experiences in photos, or instill a sense of jealousy or FOMO (Fear of Missing Out) in those viewing it online.

For investors, though, this trend should continue to favor stocks that cater to experiences such as the restaurant and travel industry, rather than just selling goods.

Why trends are so important
The stock market is largely driven by short-term projections by Wall Street analysts who push stocks up or down based on a narrow earnings misses and beats. With their attention focused on quarterly results, the market often tends to miss the forest for the trees, ignoring the trends that are driving multi-bagging stocks. Some of the best-performing stocks over the last 10 years, such as Amazon.com, Netflix, and Chipotle Mexican Grill (NYSE:CMG), have been those that benefited from and even led industry-changing trends like e-commerce, video streaming, and fast-casual dining.

Similarly, I expect stocks in the restaurant, travel, and events industry to benefit from the shifting consumption to experiences. In particular, online travel brokers like priceline.com (NASDAQ:BKNG) and Expedia (NASDAQ:EXPE) should be winners, as the two have come to dominate that industry through series of mergers, essentially creating a duopoly. Priceline has picked up such hot properties Kayak and Open Table in recent years, while Expedia has gone on even more of a shopping spree, acquiring competitors like Travelocity, Trivago, and Orbitz, which is pending.   Both companies are especially strong in hotel reservations, having seen tremendous growth from Expedia's Hotels.com and Priceline's Booking.com, and analysts expect double-digit revenue growth to continue into next year. The chart below shows how the two have dominated the market over the last five years. 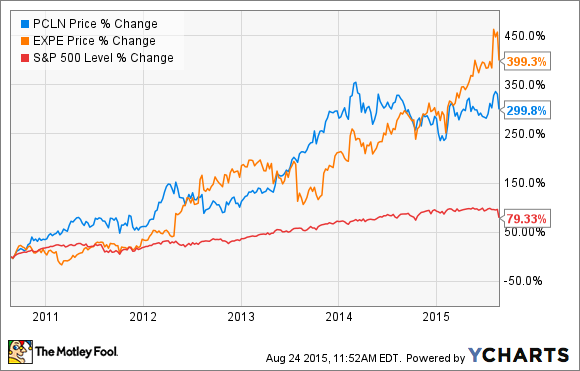 In restaurants, many IPOs have fallen after debuting at triple-digit P/E's, but there are some promising picks in the space, and I think Chipotle's proven connection with millennials should make it a consistent winner. The strength of the restaurant industry is clear from the 9% industry growth figure and its taking share from the grocery industry. As fast food giants McDonald's and Subway continue to falter, that will open up increased opportunities for Chipotle. The company has less than 2,000 stores nationwide today, and could easily grow to 5,000 or even 10,000, especially when including its seed chains ShopHouse and Pizzeria Locale.

Other stocks like Live Nation Entertainment (NYSE:LYV), which puts on music festivals around the country and also owns TicketMaster, the country's largest ticketing agent, present an intriguing opportunity as well. Live Nation is the world's leading concert promoter, owning about three quarter's of the top 25 tours. The stock has jumped nearly 200% in the last three years as the company's profitability has improved. With its dominance of a growing and popular industry, and the leverage to profit on ticket sales, results should move higher going forward.

With the millennial generation's share of spending only growing as many of them approach their prime years as consumers, I'd expect this trend to spending on experiences to accelerate, which means good news for the restaurant, travel, and events industry, and continued headwinds likely for old school retailers.