So here we go: the sluggish time in the summer between earnings seasons, when dividend raises wither in the heat. That, combined with the scary roller coaster that is the current market, has meant only a few scattered increases recently.

But as per recent trends, there are still some optimistic and generous companies out there. We've found three prominent ones for this installment of our series. Read on to find out which stocks made their investors richer last week, and the whats and whys of their hikes:

Altria (NYSE:MO)
Take a puff of this: In spite of some gusty headwinds, the tobacco giant has increased its quarterly distribution by 9%, to nearly $0.57 per share. So what else is new? A famously generous dividend payer, Altria Group has -- through its various iterations through the decades -- bumped its payout 49 times in the past 46 years. 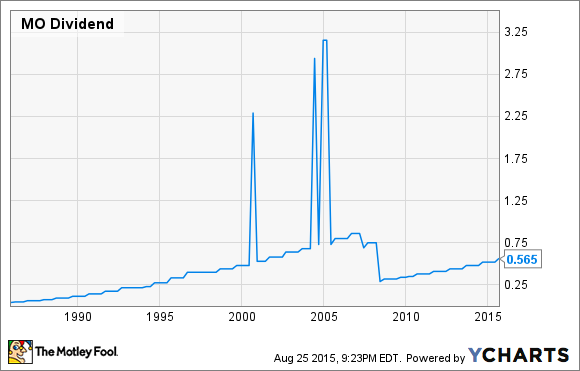 It's also managed to improve its results, no easy feat given the increasingly challenging environment it operates in. Anti-smoking regulations continue to get ever tougher, yet the company still grows. In its most recently reported quarter, it posted a nearly 6% year-over-year improvement in net revenue, to $6.6 billion, and a 15% rise in net profit, to almost $1.5 billion.

In the short to medium term, investors probably don't have to worry about the sustainability of the dividend. The company, as ever, throws off more than enough cash to keep it up for some time.

That might not be the case in the long term, however, because those regulations are only going to get stricter. Healthy living trends and public sentiment aren't moving in favor of the tobacco business, and even a wily industry veteran like Altria Group will struggle against this.

The company's new dividend is to be paid on October 9 to shareholders of record as of September 15.

ITC Holdings (NYSE:ITC)
A 15% dividend increase is crossing the wires of this company, the largest independent electricity transmitter in the country. ITC Holdings has lifted its quarterly payout to nearly $0.19 per share.

True to its nature as a steadily growing utility, the company is a regular and habitual dividend raiser. It's done so once every year since its IPO just more than 10 years ago.

ITC Holdings' second-quarter results indicate that this will continue into the foreseeable future. Operating revenue rose by 5%, to $275 million, while net income jumped by more than 30%, to $72 million. That's a net margin of 26%, which is par for the recent course with this quite profitable company. 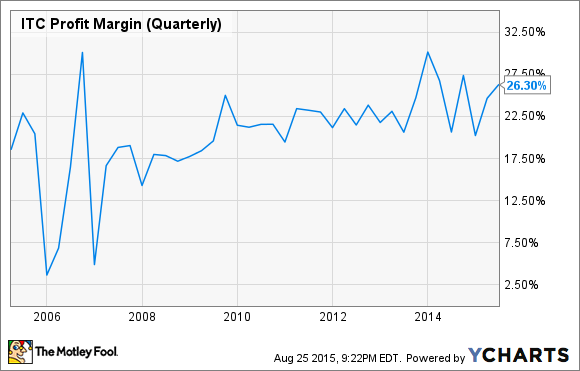 More growth seems to be on the horizon. The largest investment project in its history, the Thumb Loop transmission line in Michigan, has been completed. This will bring in new revenue while allowing the company to spend its capital on other investments.

All told, ITC Holdings anticipates making a per-share profit of $2.00 to $2.15 in fiscal 2015. That would be an improvement of up to 40% on the fiscal 2014 tally, and more than enough reason to be confident about the future viability of the dividend.

The company will hand out its just-raised distribution on September 15 to stockholders of record as of September 1.

Brinker International (NYSE:EAT)
Now it's time to put a dividend raise on the plate for a tasty appetizer. Brinker International, operator of the Maggiano's Little Italy and Chili's Grill & Bar Restaurant chains, has increased its quarterly distribution by 14%, to $0.32 per share. 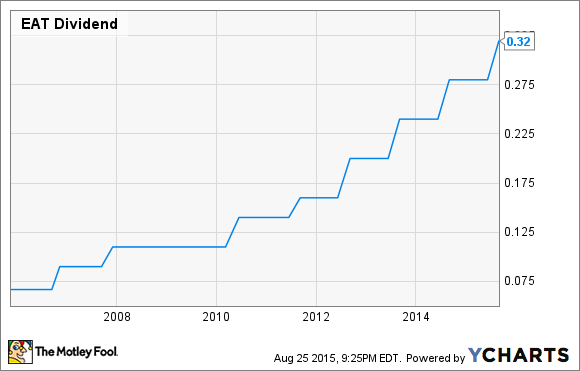 This, despite a rather forgettable fourth quarter and fiscal 2015 reported earlier this month. The former's net sales, at $764 million, were only slightly higher than in the same quarter last year. Stripping out litigation-related expenses incurred in the second quarter of 2014, net income didn't rise too much, increasing by 4%, to $59 million ($0.94 per diluted share).

That's plenty of growth, and the bigger pile will add nicely to the company's free cash flow... which is already well in the black. It's also far more than enough to pay the dividend, even at the newly enhanced rate. I believe the company's distribution is very safe for now.

Brinker International's upcoming dividend is to be handed out on September 24 to holders of record as of September 4.