This small-cap clinical-stage biopharma company is on a stellar run this year. Can it continue?

While the stock market is currently going crazy and has dipped into the red for the year, investors in Novavax (NVAX 6.20%), a clinical-stage biopharmaceutical company focused on creating vaccines for infectious diseases, are currently sitting pretty. Its stock is currently rocking the market's year-to-date return, as it's up more than 80%, far outpacing the S&P 500.

So why is this unprofitable small-cap stock doing so well while the rest of the market is sucking its collective thumb? 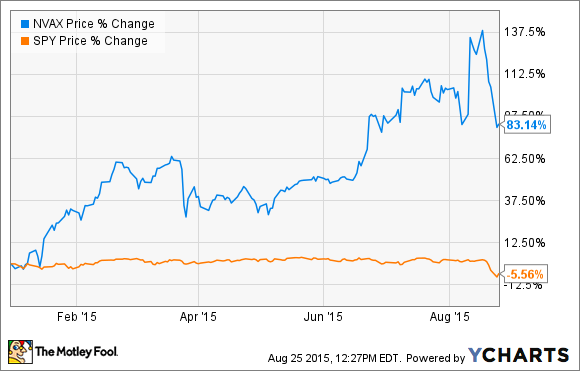 Treating patients can require a lot of patience
While Novavax's stock has been on a great run year to date, its longer-term public history tells a different story. Novavax traces its founding to 1987, and the company first sold shares to the public in 1995. I say "first sold shares" for a reason, as it has regularly been issuing shares to investors to keep its operations running, and its share count is up more than 2,100% since its IPO.

As expected of nearly any clinical-stage biopharma company, its stock has put investors on a huge roller-coaster ride over that time, and despite the great performance recently, early investors are losing to the market's return. 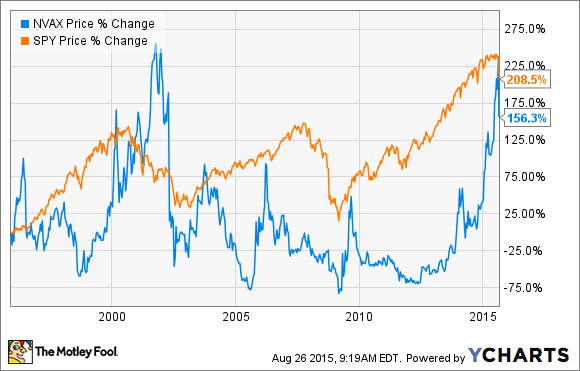 Enter the media
While the company was going about its business quietly for years, Novavax's pipeline appears to have caught investors' attention more recently, as the company is currently researching vaccines for Middle East respiratory syndrome, or MERS, and Ebola, both of which have been all over the news recently. If the company can successfully develop treatments for these diseases, it would certainly be a huge win for everybody, but investors need to understand that these potential vaccines are still in the very early stages of development. Novavax's Ebola candidate is currently in phase 1, and its MERS work is still preclinical, so it will be years before we know whether the company will be able to monetize either vaccine.

However, the company isn't solely reliant on either of those vaccines, and what's far more interesting to me is the company's other product candidates. Novavax is much further along with its vaccines for a handful of far more common diseases, such as respiratory syncytial virus, seasonal influenza, and pandemic influenza. Each of these diseases affects millions of lives worldwide and combined are responsible for around 50,000 deaths per year in the U.S. alone. 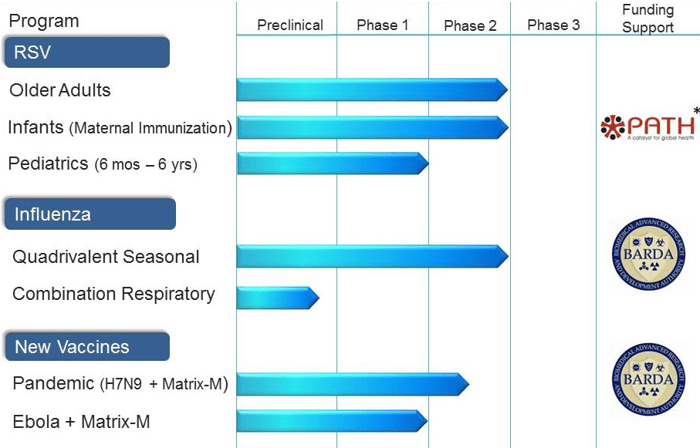 A really serious virus
Novavax appears to be making good progress with its vaccines for respiratory syncytial virus, of RSV, which is a major worldwide problem, as around 64 million worldwide catch the disease each year. While most healthy adults can successfully defend themselves from the symptoms of the disease, infants and the elderly tend to be especially vulnerable. Around the globe RSV is a truly huge problem, as it's responsible for around 160,000 deaths each year.
Novavax recently announced top-line phase 2 data for its immunization against RSV in adults over age 60, and the results certainly looked encouraging. The company was able to show that its vaccine was able to meet both of its endpoints for reducing RSV infections and did so safely. The vaccine also reduced the number of patients who experienced severe forms of the disease by 64%. This data gave the company confidence to move forward with a phase 3 trial, which could start as early as the fourth quarter this year.

Novavax is also working on an RSV vaccine that could vaccinate babies before birth. The FDA apparently likes this idea a lot and has granted the vaccine fast-track status for this indication. We shouldn't have to wait long for an update on the progress here, either, as the company will be releasing safety and immunogenicity data in its phase 2 trial in infants later this quarter.

If Novavax is successful with bringing its vaccine to market, then the opportunity looks huge. Peak sales estimates for the RSV vaccine in the U.S. alone are currently hovering around $1 billion. When you add in the revenue potential for an RSV immunization outside the U.S. plus the additional option of its influenza, Ebola, and MERS programs, Novavax is chasing what appears to be easily considered a multibillion-dollar opportunity.

Big players want in on this big market
As can be expected of a market that that offers a big potential payout, Novavax isn't the only vaccine game in town. The company currently counts some Big Pharma giants as competitors, including the likes of Sanofi, GlaxoSmithKline, and AstraZeneca. For the time being, Novavax appears to be generally a step ahead of these industry giants with its development efforts, but investors need to keep an eye on these well-financed potential competitors, as any misstep that delays its clinical work could certainly allow these players to catch up.

Show me the money
With small-cap clinical-stage biopharmas, investors should be looking out for companies with a huge pile of cash and no debt to decrease the risk of the company running out of money and being forced to dilute existing shareholders by offering new stock. Novavax appears to pass this test nicely, as the company boasts $314 million in cash on its balance sheet and no debt. Better yet, the company has research contracts with the Biomedical Advanced Research and Development Authority, or BARDA, for its flu research that could allow it to snag another $179 million in payments from the government. These numbers compare quite favorably with the $45 million the the company burned through in the first six months of the year, which should give investors confidence that the company is in a strong financial situation.

Is Novavax a buy?
While early data looks good, investors should continue to approach the stock with caution, as bad news can still happen when phase 3 trials come around. The company is also years away from possibly turning its vaccines into revenue, so the losses are likely to keep coming for a while.

That being said, Novavax has a lot going for it that could made it a good choice for the speculative portion of an investor's portfolio. If the company continues to report clinical results that look good, I might be willing to make it a small part of mine.