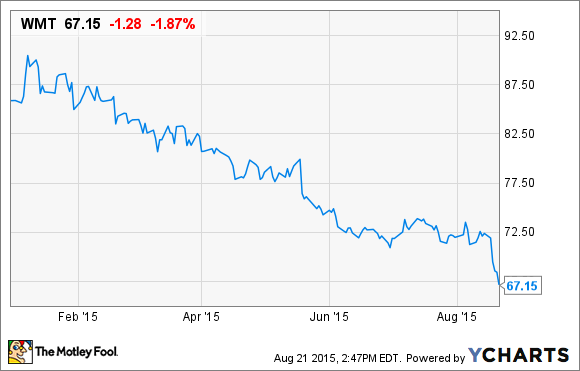 This year has not been kind to Wal-Mart Stores (NYSE:WMT). Shares of the world's biggest retailer are down more than 20% since the beginning of 2015. One might have assumed that with the steadily improving economy in the United States and the added tailwind of low gas prices boosting consumer discretionary income, Wal-Mart would have the wind at its back. But that hasn't happened.

Wal-Mart has delivered multiple disappointing earnings reports to start the year, and the trend continued after it delivered weak fiscal second-quarter results on Tuesday, Aug. 18. The company missed analyst expectations on earnings and then lowered its outlook for the full fiscal year, again below average forecasts.

But while all the news appears grim, there were two surprising bright spots in Wal-Mart's report that got lost in the shuffle.

Last quarter, Wal-Mart reported $3.48 billion in net profit, or $1.08 in earnings per share. That figure was down from $3.92 billion, or $1.21 per share, in the year-ago period. Earnings per share declined 10% year over year and missed analyst expectations, which called for $1.12 per share, according to estimates compiled by Thomson Reuters.

However, Wal-Mart's small-store format, under the Neighborhood Markets banner, is thriving. Last quarter, Wal-Mart realized 7% comparable-store sales growth for Neighborhood Markets. Comparable-store sales is a critical measure for retailers that calculates sales growth at locations open at least one year. The figure came in well ahead of Wal-Mart's overall comparable sales, which rose 1.5%.

Going forward, the small-store format should continue to boost Wal-Mart, because the company is aggressively expanding its Neighborhood Markets brand. It has opened more than 350 Neigborhood Markets in the past two years and plans to open 160-170 smaller stores this fiscal year, compared with just 60-70 Supercenters.

E-commerce is a major opportunity

The other major factor working in Wal-Mart's favor this year is its booming e-commerce business. The mobile revolution continues, and retailers such as Wal-Mart are busying working to cash in on this huge opportunity. For example, Wal-Mart's technology platform Pangaea is improving traffic and conversion for Walmart.com, and the results speak for themselves.

One specific initiative that helped Wal-Mart last quarter was its Dare to Compare event that kicked off in July. Wal-Mart used its technology platform and internal pricing algorithm to constantly track its competitors' prices and consistently deliver lower prices to customers. Customers could then choose how to get their purchases in the most convenient way. Wal-Mart also gave customers the flexibility to have their orders shipped to their door, or to a store for same-day pickup.

Wal-Mart's global e-commerce sales jumped 16% last quarter, year over year, on a constant-currency basis. The company has expanded its e-commerce platform around the world, including key emerging markets such as Brazil and China, which is why Wal-Mart expects mid-to-high-teens growth in global e-commerce sales this year, on a percentage basis. It opened two new automated online fulfillment centers last quarter, each one bigger than 20 football fields, and the company has two more set to open this quarter.

Don't count out Wal-Mart just yet
Wal-Mart delivered two weak earnings reports to start the year, and the stock has performed very poorly in 2015. But underneath the scary headlines, Wal-Mart is still doing certain things very well. Specifically, its small-store and e-commerce initiatives are working extremely well and are producing high sales growth for the company.

Of course, these segments aren't enough to counteract weakness in Wal-Mart's broader operations, but if it can simply manage to stabilize its core, better quarterly reports may not be too far off.