As the oil industry braces for the new normal of lower oil prices for longer, there is an interesting trend beginning to emerge. For the first time in years, deflation is starting to set in and the costs of maintaining and growing production are falling. This is enabling oil companies like ConocoPhillips (NYSE:COP) to produce the same amount of oil for less money. There's still a lot of deflation yet to come if prices don't improve, which is why the company is growing more confident in its future view that it can attain cash-flow neutrality in 2017 even if prices remain weak.

Ready for any scenario

Earlier this year, ConocoPhillips' CEO Ryan Lance ran through a scenario with investors to give them a better idea of how the company was positioned for a future where oil prices remained weak. What he did is put the company's future into the context of being able to keep its production flat. He said:

The capital it would take in 2017 and beyond to keep our production flat ... is around $9 billion. So in a $75 price environment, you see we'd have $3 billion of flexibility and we're talking to you about a case this morning where we invest more than nine and we have a continuation of modest growth. But the flexibility is in our capital program where we can bring capital down and keep production flat at a $9 billion capital level.

In other words, the company would need to spend about $9 billion per year just to keep its production flat after it completed its current five-year growth plan in 2017. In a $75 oil price environment it could fund that capital expenditures number with about $3 billion to spare. However, what the company is now seeing is that the actual capex number it would need to deliver flat production in 2017 would be lower due to further cost deflation within the industry if oil prices really remain weak. We can see the two scenarios in the following slide: 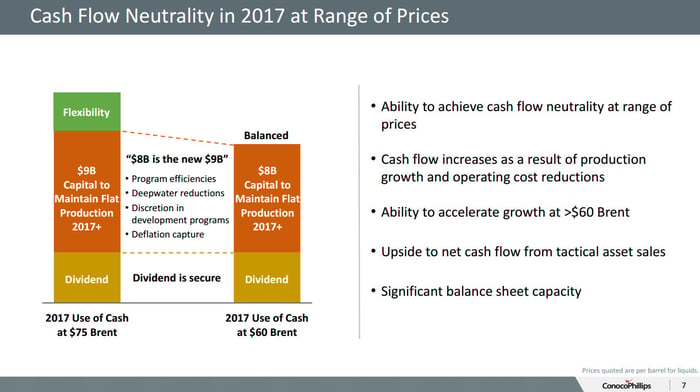 As that slide notes, if $60 is the oil price in 2017, the company will only need to spend roughly $8 billion to keep its production flat in 2017 and beyond. That number would not only enable the company to live within projected cash flow but would keep the dividend secure. That said, if oil prices are higher it would push the company's capex number closer to the original $9 billion number to deliver flat production. However, the company would actually be generating a lot of excess cash flow, which it could use to grow production, pay down debt, and/or increase shareholder distributions.

Deflation takes time
One of the reasons why ConocoPhillips isn't yet at a $8 billion capex number for flat production is because there is a lag between falling oil prices and falling costs. This is noted on the next slide, which shows the lag of deflation across the company's cost drivers. 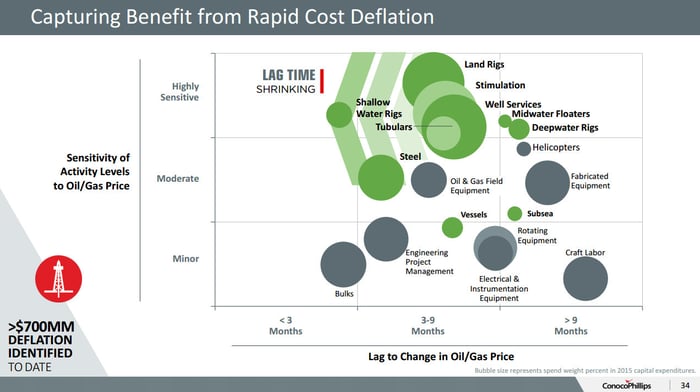 While the company is seeing the lag time shrink in many cases, it still does take time for deflation to fully set in after prices fall. One factor keeping costs elevated is the fact that the industry uses a lot of long-term service and supply contracts. Many of these contracts need to either expire or be renegotiated in order to capture additional cost deflation. In other words, the longer oil prices stay lower, the more likely the industry will be able to capture additional cost deflation as lower service and supply prices become the new standard. This will go a long way to help ConocoPhillips maintain flat production and its dividend payouts in a lower oil price environment.

Investor takeaway
If lower for longer does indeed become the new normal for the oil prices, it won't have as deep an impact on ConocoPhillips' long-term plan as investors might fear. That's largely due to the fact that the company should see significant cost deflation, which will mute some of the impact from lower oil prices. Because of that, $8 billion could be the new $9 billion that's needed to keep its production flat and its dividend secure at a $60 oil price.